The Adventures of Barry McKenzie 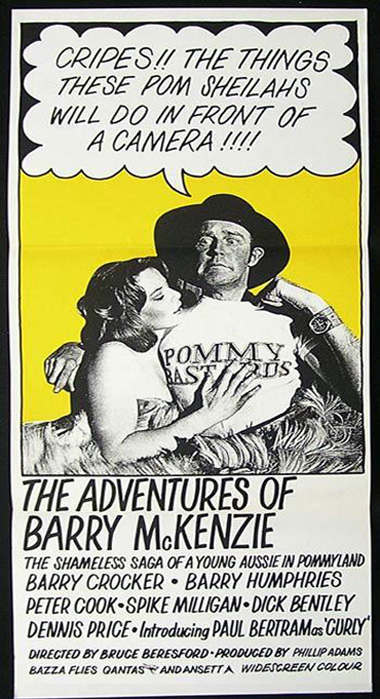 The Adventures of Barry McKenzie is a 1972 Australian film starring Barry Crocker, telling the story of an Australian 'yobbo' on his travels to the United Kingdom. Barry McKenzie was originally a character created by Barry Humphries for a cartoon strip in Private Eye. The movie was the first Australian film to earn a million dollars, and a sequel Barry McKenzie Holds His Own. Barry Humphries appears in several roles, including: a hippie, Barry McKenzie's psychiatrist Doctor De Lamphrey, and as Aunt Edna Everage (later Dame Edna Everage). Humphries would later achieve fame with the character of Dame Edna in the UK and USA. The film was produced by Phillip Adams, who became a prominent op-ed journalist and broadcaster, and directed by Bruce Beresford, who went on to direct the Academy-award winning film Driving Miss Daisy in 1989.