As time goes by, The Bennets, Cathy (Dorothy Duke) and George (William Thomason) realize that they should have had some buns in the oven by now. But nothing has showed up. This calls for a visit to a neurologist named Dr. Wright (Played by Timothy Farrell--Who would later go on to appear in a few flicks by Ed Wood, Jr.) After a dual exam of the couple, it's found out that there's no problems with Cathy, but the answer lies in George...Whose sperm is dead. Alas, the medical wonder that is known as artificial insemination is recommended. After some discussion, the Bennets go through with the idea and--Whoa! The movie ends with the couple not having one, but two kids! 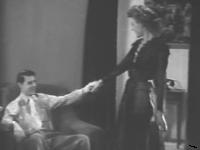 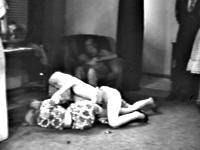 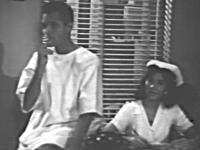 So that's all the plot really. It sounds like it could be long enough to be a 15-minute instructional film, right? So what's the rest of the time spent on, you ask? Well, since the filmmakers felt safe having the "Educational angle" added to the film, why not just throw in some extra titilating material for the patrons! So a big,lengthy bonus scene involving a party thrown by Cathy has been added for good measure. And here, we get treated to a little strip/burlesque dance from one one of the hottie party attendees. Though this strip/dance would have been the "money shot" of the film, it's immediately topped by a catfight in which one of the brawlers loses her top! Pretty risque stuff for way back then, but there might have been some other "money shots" included involving the artificial insemination process, but the version I saw appeared to have those scenes as "missing reels". So as a result, I got stuck watching an early porn flick instead of a an educational film! Good job, censors!