After a fairly warm introduction thanks to a Sugarhill Gang-esque title song which opens and closes the movie, we're thrust into the lair of a den of violent, drug abusers who are gettin' their high on in the basement of a tenement in the South Bronx. Almost unbeknownest to these sickos, two cop squad cars are closing in on their location. The tenent's super, Rojas (Larry Lara) gleefully leads the cops to the front door of this drugged-out gang. And as soon as this mob-slime is thrust into the backseats of the police cars, you can see the smiles of the local tenants in the higher floors open with joy. It comes as no surprise that a planned celebration will take place in one of the tenent's respected rooms. 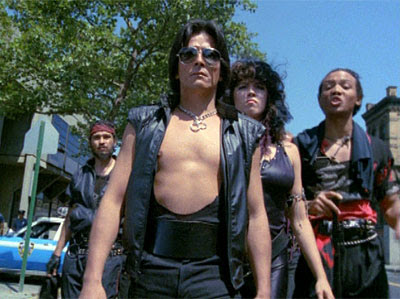 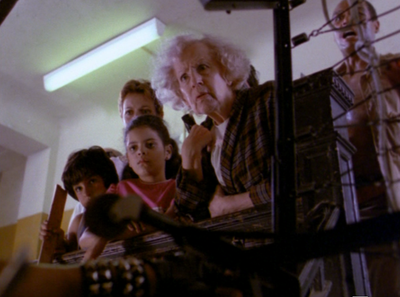 But as the party is going on, one of the residents doesn't feel sure that things will be alright, but she's quietly silenced. Sure enough, the gang is out on the streets faster than you can see "Get-out-of-jail-free card." Yet, surprisingly, the gang decides to get their drug-induced enjoyments elsewhere, but (perhaps absorbing a bit too much) the gang's leader, Chaco (Enrique Sandino), who was earlier acting like a mute, wooden Indian-type, suddenly yells out the dream that he's been having. "My dream...is filled of blood." And with that simple conviction, the gang is off to put on one of the worse terror sprees in Grindhouse-cinema history.

Director Roberta Findlay seems to already be enshrined into the Exploitation Hall of Fame with the work that she (along with her husband, Michael Findlay) had established for nearly over 20 years prior to 1985, but one can see that her work done on TENEMENT can secure her status in the Exploitation Hall of Fame-Afterlife (if there happens to be one!) The results of this film garnered it a famous tagline reputation, "Too violent too be rated." And, sure enough, the proof is there. 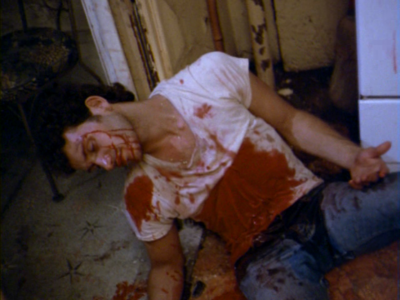 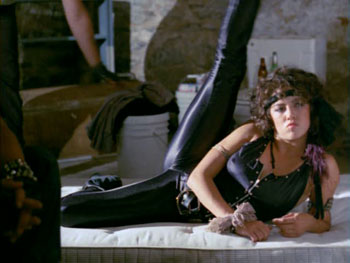 The violent gang ascends each floor of the tenement, causing one monumental grief-blow after another to the audience, until the silenced crowd can finally yell out their approval when the gang gets a taste of their own medicine. But prior to that point, the viewer's endurance is tested the same way it must have been when I Spit On Your Grave was making it's reputation around the world. You know the scene in ISOYG when the rapists mock Jennifer's draft of her novel that she's working on? Reflections of that scene are brought back when the gang in TENEMENT ravage and destroy the household of the tenement's apartments. As the blood-soaked victims lay nearby, the gang members have their way with the prized, personal possessions of the residents of the floor that they have invaded and conquered. And all the surviving victims can do is climb higher & higher to the top of the building and hope for a miracle. And when that miracle is out of their reach, it's up to them to fight back. Plus, there's a wise inclusion of a timeline; use of both the clock and floor level progress constantly keeps the viewer on edge.

Sadly, it's time for some pros & cons of the movie, but good thing to know is that the pros outweight the cons. The first obvious thing was that this was made in the 80's. And it's refreshing to hear that this one doesn't totally reek of the 80's as some flicks from that era have. Sure, we've got some wild costumes of the gang members that stand out, but thankfully the music score by William Fischer and Walter E. Sear keeps the viewer occupied by letting them feel at home with a "Grindhouse" sound. And speaking of Grindhouse, one of the plot-points of the movie (Pre-cellphone era) involves the use of no assistance for calling 9-11 once the gang has cut the wires, so the "Old School" approach is definitely felt. 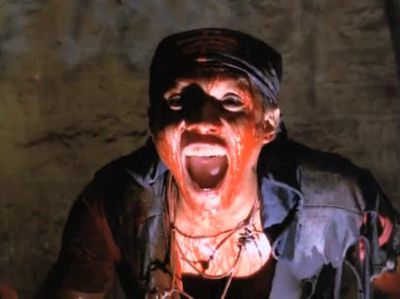 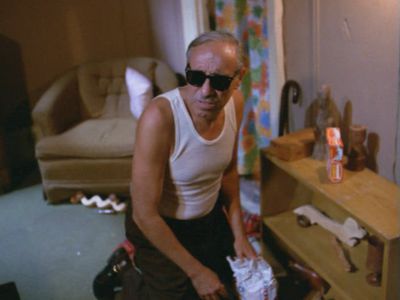 My last beef is towards one of the main tenants, Sam Washington (played by Joe Lynn). Upon first glimpse, the viewer gets the feeling that THIS is the guy who could fend off the gang members with ease. Though he certainly approaches that level of taking control with the other shaken, weakened residents of the tenement, his potential comes up way shorter than anyone would've guessed. But maybe that's what the filmmakers were going for. After all, the one resident who doesn't feel secure about the situation from the get-go ends up suffering the WORST death in the building. And this includes electrocution, disembowelment, impalement, scissors in the eyes, slit throats, and a plunge. In short, this is one of those few works that leaves such an impression that nothing since then has ever seemed to come close and, perhaps never will, surpass.