While I wasn't too into the film itself, the DVD extras were much more interesting to me. 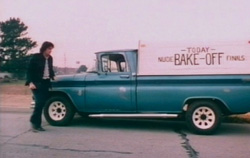 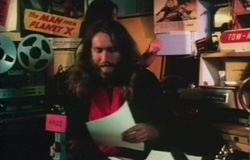 Interviews with: Teenage Cruisers co-star William Margold (who did some hardcore scenes), Artist William Stout who has designed movie posters for such films as Teenage Cruisers, Wizards & Rock N' Roll High School, Musician Billy Zoom (of the legendary Los Angeles punk band X) who contributed music to the Teenage Cruisers soundtrack. Billy Zoom had a case of amnesia in this interview because he couldnt remember ANYTHING Johnny told him from back in the day. It was pretty funny. Johnny was rambling on about their adventures and Billy sat completely still like a mannequin. Johnny's friend Rockin' Ronnie Weiser also makes an appearance and the two pals chat about the old days of sex, drugs & rock n' roll. Also included on the disc is the films original theatrical trailer and some footage of some of the locations where the film was shot.

So I guess overall the DVD as one strange trip down memory lane is worth the buy for hardcore exploitation fans. I really don't think many people who watch Teenage Cruisers will be impressed by it. Maybe if you do some shrooms or get really drunk, that may give it a boost.