There's some movies you just wish you could have seen at a real flea-bag grindhouse back in the day. FIGHT FOR YOUR LIFE, CANNIBAL FEROX, and PIECES come directly to mind for me, just to see the patrons jaws drop right in to their laps. Those films were real pioneers in shock and their resonance is still felt today on the fans who watch them in the comfort (safety?) of their own homes. Then there's the "WTF?" movies that I'm sure instilled looks of disbelief and jeers that would rattle even the most jaded stand-up comics. SUPERSTITION is one of those movies.

A young couple is "parking" on some condemned property and the girl gets nervous and wants to get the hell out of there. Her guy assures her that all is well, but of course, it isn't. Just as they're about to round third base, a joke store rubber mask attached to a string(?!?) startles them and they get out of Dodge. Turns out, two teenage buddies were pounding some canned beer in the attic of the old house and set up the practical joke for kicks. One dude gets locked out of the now malicious house, and his buddy tries to get out of the house and hook up with him to leave. The guy stuck in the house wanders in to the kitchen, where a microwave opens it's doors and turns on (spooky!). The dude outside finally gets in the house and finds his buddy's severed head in the microwave (which is still on), and it blows up! He then tries to escape the house, but can't and ends up getting cut in half trying to crawl out a window.

The next day at the local church rectory, the fuzz comes in to see the local priest and ask if he knows anything about what happened. Why is that? Because the church owns the land on the condition that they let every generation of the Sharack family live in the guest house (what?). Ornery Inspector Sturgess (Salmi) doesn't like or trust the church and makes the Rev. Maier (Stacy Keach, Sr.) and new, younger priest Rev. David Thompson (James Houghton) go to the Sharack place and have a look-see. Seems carzy old Elvira (Jacquelyn Hyde) and her mute inbred son Arlen (Joshua Cadmen) are the last of the Sharack's and are basically there to make everybody nervous. The cops check out the black pond on the property, and one cop gets sucked in to the water, but they never find the body. Of course, Sturgess don't take any shit from the Sharack's, so he attempts to throw Arlen in jail...but he escapes (are the Keystone Cops the only police in town?). 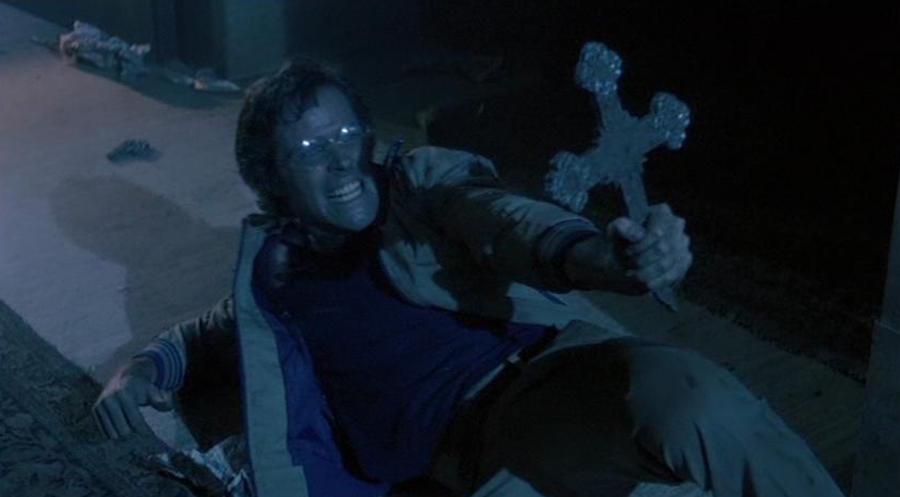 A few weeks (months?) later, the house is almost done being remodeled and the old Rev. decides it's high time to exorcise this evil place before the new pastor and his family move in, but wouldn't you know? He gets a circular saw blade in the chest for his troubles (hey, they didn't have kill switches back in the early 80's). Now, you'd think Rev. Dave would just say "Fuck it, I'm out!" But no, he presses on because that's what the other Rev. would have done. The pastor and his new family arrive (with two hot-ass daughters in tow), and everything is cool...for about 5 minutes. Some dumb-ass handyman gets hung up in a dumbwaiter (I think that's what it is), to which his foreman replies "Oh, he must have left in the other truck." Hey numbnuts, BOTH TRUCKS ARE RIGHT IN FRONT OF YOU! Anyhow, the next day the girls are out at the pond and the requisite blonde is swimming and gets pulled under by an "unknown force". Thank God the cops and the church have the place under 24 hour survaillance (no joke!), as Rev. Dave jumps in and save the girl who emerges with the missing cop's severed hand attached to her ankle! The cops order the pond drained but that "unknown force" (from here on out, referred to as UF) keeps clogging the pumps. Rev. Dave finds an antique crucifix in the lake and brings it back to the church to do some research on it. The young son (genre stalwart Billy Jacoby) finds his old man in the cellar drinking because he knows that some UF is working against them. The kid then succumbs to the UF, and then, FINALLY, the shit hits the fan. But what it is? Is it crazy old Elvira? Is it her HILLS HAVE EYES-reject son Arlen? Or is it something much, much worse?

This movie ranks right up there with BLOOD FEAST for great quotes. For instance, when the pastor's two jailbait daughters are hanging around the pond in their bikinis, Rev. Dave is obviously interested, and Sturgess notices his bulging erection (at least, I think that's what it was). Sturgess tells Dave "Don't forget about your vows, Padre". Or when Sturgess is describing the need to get rid of the Sharack place once and for all to the Rev.'s he says "Hell, that's where I got my first...you know." Classic stuff. Watching the movie, I kept thinking of the old Eddie Murphy bit where he talks about going to see THE AMITYVILLE HORROR. He said he couldn't believe that white people wouldn't move out of a possessed house that kept moaning "GETTTTTTTTT OUTTTTTTTTTTTT!". If Black people lived there, the first "GETTTTTTTTTTT OUTTTTTTTTTT" would be met with a "Nice place. Too bad we have to leave." I couldn't stop laughing to myself through the whole movie. Like seriously, what was going to be the final straw in this place? The Rev. getting a saw blade in his chest didn't do it. Or the severed cop hand. The young son going missing pushed some buttons, but not all. What the hell are these people doing here? Allusions are made to the dad/pastor liking the sauce, but surely even a drunkard pastor can make enough to give his family a house that doesn't try to kill them at every turn.

Like I said earlier, I would LOVE to watch this movie with a packed Deuce crowd. There's some splashes of decent gore, sexual innuendo, and colorful characters abound. But there's also no logic, lame plot points, and red herrings abound. It took four friggin' people to write this thing. Why? It's not complicated and you can see where it's going right off the bat. It does have a nice CARRIE/FRIDAY THE 13TH downbeat ending/surprise coda. If MST3K was still around, I would totally suggest this as one of their next pics to tear apart. But despite it's flaws, it's highly entertaining and oddly charming. It's also one of the first movies from Carolco Entetainment who would later make blockbusters like TERMINATOR 2: JUDGMENT DAY and BASIC INSTINCT. Ironic that this film is as empty-headed and superfluous as most of their later output. It just goes to show that you can't polish a turd - no matter what size the budget.

Recommended, but make sure you have a bottle of your favorite livations and some buddies over to heckle the flick. Hell, if you don't mind piss, cigarette smoke, and a passed out junkie in the corner you can turn your media room in to your own grindhouse!