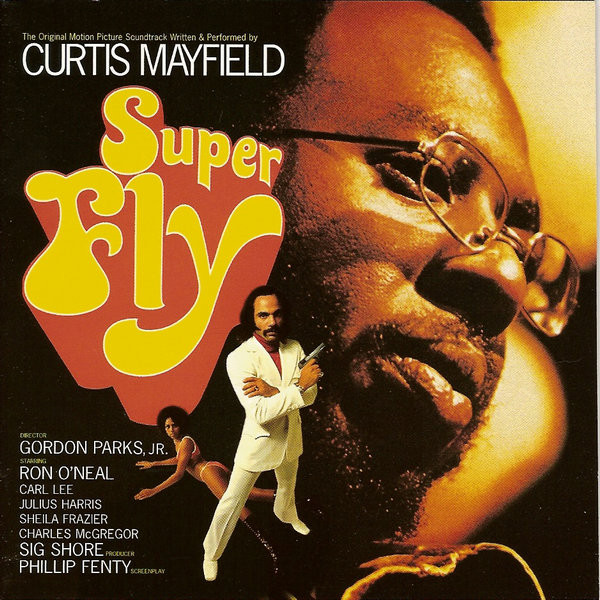 Superfly was one of the biggest Blaxploitation hits to be released in the 1970s. It actually knocked The Godfather out of the number 1 box office spot back in 1972 when it premiered! The film starred Ron O'Neal as Youngblood Priest a supercool pimp/hustler whos looking to get out of the drug dealin' business for good by hitting one last big score of cash. With its realistic look at life on the streets and the portrayal of the drug/pimping lifestyle, some considered Superfly a glorification of the underworld, but singer-songwriter Curtis Mayfield created one of the best scores which comments on the reality of the films subject matter. Its one of the best scores ever written for a film and The GCDb is very happy to bring this extremely funky, soulful review to our readers.

"Little Child Running Wild" is the opening track for the film, as we see two junkies shuffle down the street actin paranoid. Made with extraordinary sounds of bongos, organ, high hat and fuzzy electric guitar, when you hear Curtis' lyrics come in you'll be transported directly to the hard streets of NYC. Its a tale of a hard knocks life where a little child has grown up with no real love, all he knows is a life of false hopses brought by drugs. Its a life filled with sadness and prejudice. The film rocks on with more instruments, trumpets and strings. Its a brilliant piece of soulful, funky misery.

"Ghetto prince is my thing, makin loves how I swing..."

"Pusherman" is the iconic song from the film about Priest and his business dealing drugs. It opens with some really funky bass and drums. The electric guitar chimes in and we are feeling the funked out rhythm. Curtis preaches to us like a drug dealin' prince whos only out for himself. There is no good or bad, he just is what he is. This song almost glorifies the lifestyle with its lyrics. We are getting the straight dope from the mind of Youngblood Priest or really any drug dealer who lives the drug dealin' lifestyle.

"Freddies Dead" blasts open with the classic pimped out sounds of the electric guitar, bass and drums. This is one of the best songs from the entire Blaxploitation film genre. The song tells a tragic tale about Freddy, one of the soldiers who works for Youngblood Priest. Freddy has been used and abused and mistreated his whole life and Curtis tells us the dangers of traveling down the dark trail of drugs. The funky sounds of Curtis' guitar with the flutes and horns are just so cool, you'll want to jump in your Pussy Wagon and cruise down the street with this jam on 11. "Junkie Chase (Instrumental)" is a very rapid paced piece made up of piano, electric wah wah guitar, horns and quick snare drummimg. As horns blare out a funky jam, the music builds as the piano plays faster. This definitely will get your adrenaline rushing. As the bright horns blast out one last time, the song ends.

"Dont worry about no attitude, you just be yourself, could live with you in solitude and need noone else..."

"Give Me Your Love (Love Song)" is a slowed down rhythmic ballad. We hear a tapping from the bongo and high hats, with a heavenly strumming from the harp, then a jazzy piano and electric wah wah guitar and bass drop in, its a funky love jam from Curtis' heart. As the strings play, we hear the excellent lyrics crooned by Curtis. Hes telling us about a love that has changed his life for the better. With this feeling, Youngblood Priest has seen whats great in life, its not money, not power, its the love of a good woman.

"Eddie is everybody's friend but sometimes we wonder now and then..."

"Eddie You Should Know Better" is a tale about Youngblood's partner Eddie (Carl Lee) and how the choices he has made has had a negative effect on his family and friends. Through a nice melody made up of strings, wailing electric guitar and hard hitting drums, the theme is a sad, but still funky one.

"Im so glad Ive got my own, so glad that I can see, my lifes a natural high, the man cant put no thing on me..."

"No Thing on Me (Cocaine Song)" is about choosing a natural high over the high you get from drugs. Curtis speaks at the beginning of the song telling us to "dont make no profit for the man.." A very uplifting song about staying clean with bright horns, piano and drums make this one of Curtis' best "message" songs. "Sho' is funky, and I aint no junkie". "Think (Instrumental)" is a very bluesy, soft guitar based melody with oboe, light drumming and a tenor sax. A peaceful melody with some great rhythms and sounds that will surely have you kickin back and just groovin to its easy sound. Another gem from this brilliant soundtrack.

"Ohhhh Superfly, youre gonna make youre fortune by and by..."

"Superfly" is the funkiest track with a deep dipping bass melody and horns popping out, it has a quick paced feel and the story is all about Youngblood Priest who is the Superfly of the film. The funked up wah wah electric guitars and snare drums add to the mix. This is simply one of the most recognized themes from the Blaxploitation era.