After making the seminal LA punk rock documentary The Decline of Western Civilization (1980), Penelope Spheeris wrote and directed her first feature for Producer Roger Corman. Suburbia examines the life of alienated youth who have started their own squatter family called "The Rejected" or T.R. An interesting fact is that instead of hiring trained actors to play the punk rock kids, Spheeris went to punk clubs and cast kids from the scene. The result of this was a more realistic, genuine feel to the story being told.

At the opening of the film we meet Sheila (Jennifer Clay), a runaway who is hitchhiking on the highway. When a woman in a stationwagon picks her up, she soon gets a flat tire so they stop to phone a tow truck. As the woman makes the call in a phone booth, a wild dog watches them. Her baby begins to cry. When the dog sees this, he charges at the toddler and begins tearing him apart as the mother and Sheila watch in horror. This takes place BEFORE the opening credits! 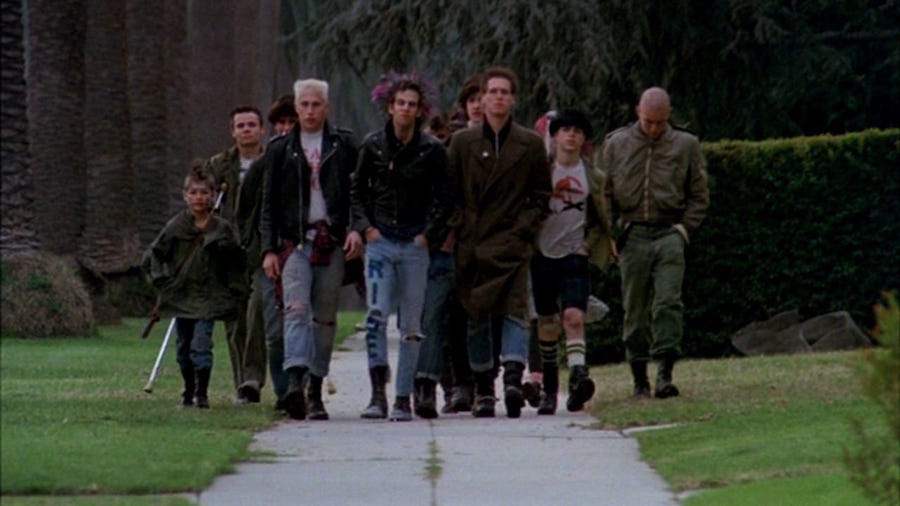 We then meet Evan Johnson (Bill Coyne), a kid who's mother is an alcoholic. Shes very abusive towards him (this character was based on Penelope Spheeris' own mother) and he decides to pack his things and leave. Evan's little brother Ethan (Andrew Pece) is left behind. Evan walks the streets alone not knowing where hes going to end up. While sitting in front of a diner, he spots a group of punkers walk by him, so he gets up and follows them to a punk rock show featuring a band called DI. The lead singer is singing (or screaming) a song called "Johnny Hung Himself". This is where we see what the LA Punk scene was like in the early 80s. Evan drinks some beers and watches the show while the punkers slamdance and a stuck up girl gets her dress torn off by a skinhead punk named (you guessed it!) Skinner (Tim O'Brien) This is a pretty cruel scene, but its also kind of funny (Remember, Penelope Spheeris wrote this!) The girl is completely nude and the punkers all laugh at her. The band stops performing and lets it be known whats going on "isnt cool". The club promoter quickly breaks up the show and tells everyone to leave. As the terrible house Musak plays, the punkers file out of the club into the night. Evan has passed out on the floor in a puddle of puke after being slipped some drugs by a punk kid. The club puts him outside on the grass and this is where we meet Jack (Platoon's Chris Pedersen). Jack helps Evan get up and offers him a ride. The two camp out in a parking lot and the next day Jack brings Evan to his squatter pad in an abandoned housing project. Evan meets the rest of The Rejected family including a guy named Razzle (Flea of the Red Hot Chili Peppers) who loves his pet rat. Jack explains to Evan that to live in the house, he has to brand the T.R. logo on his arm to show his respect towards the family. Evan agrees to do it. Sheila (who we met earlier) finds her way to the TR house where she is given a crew cut and the TR branding as well. Another kid has a father whos gay, so he joins the TR family too. Evan's brother Ethan becomes a member and hes given a mohawk. In one of the films most iconic sequences, we see The Rejected Family walking in slow motion down the neighborhood streets as the "straights" look at them like they're aliens. 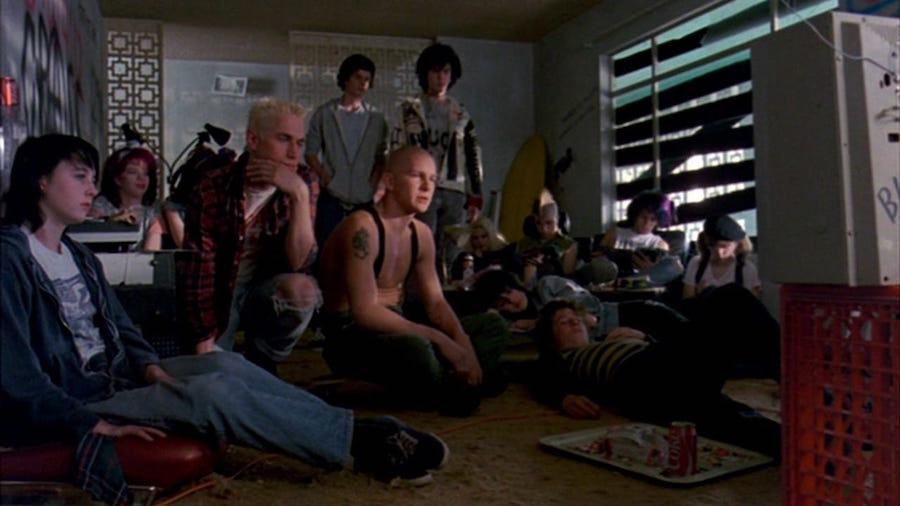 Evan soon learns what its like to be a squatter as Jack and our old pal Skinner show him the ropes. They drive into rich neighborhoods and look for open garages with noone around. Then they stop and raid the peoples freezers for food and beer. This film shows what its like to be a kid who has no family life and the troubles that occur when kids are left to their own devices. The TR kids get into trouble when two local rednecks begin to harass them, but Jack's stepfather, who happens to be a black policeman, tries to help the kids by telling them to leave the squatter house before something bad happens to them. The film is filled with several very shocking scenes which I was really surprised by, especially coming from a female director.

Theres three live performances featured in this film by the So Cal Punk bands: TSOL, The Vandals and DI.