Although I've reviewed TONS of cash-in movies, this is the first time I watched the original movie back-to-back with the cash-in. That's because I heard that Strike Commando is a cheaper version of Rambo: First Blood Part 2 and I decided to watch them today. Yes, Spoony One (who reviews this film on his website) is correct. This is another cash-in for Rambo although I want to call it a rip off.

Seriously, this is a shot-by-shot remake of Rambo with a slightly different plot. It resembles Rambo more than Missing in Action, another Rambo cash-in at the time. The plot is about Sgt. Ransom (Reb Brown) who finds out that the Russian army still exists in Vietnam, so Colonel Radek tells him to photograph the area to prove it. Guess what happens next? He's captured by Russians, he's tortured, he escapes, and there's a betrayal....just like in the Rambo movie. Hell, there are LOTS of scenes that were remade like the electrical torture scene or even a scene in which the bad colonel stands in front of an electric fan. 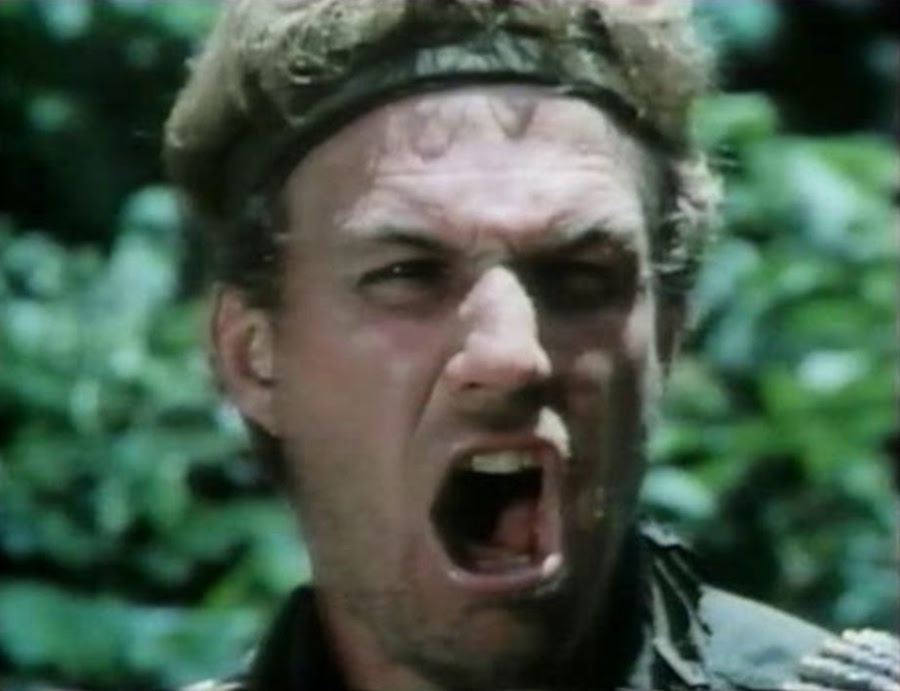 What makes this film different from Rambo is the fact that it was directed by Bruno Mattei, a guy who brought us "so-bad-it's-good" movies like Hell of the Living Dead. That's why this film has a cheaper budget, worse acting, worse dialogue (see below), worse plot motivation (I'm not sure why Radek betrays Ransom), and more action scenes than the Rambo (Hooray!).

Two great things about this film are 1) the fact that Reb Brown is always shouting when he kills the enemy and 2) the infamous "Disneyland" scene. There's a subplot in which Ransom befriends some villagers, but then the Russians burn the village and kill almost all of the people. When Ransom finds a badly injured kid, the kid asks him what Disneyland looks like. According to Ransom, "They got tons of popcorn there. All you gotta do is go climb a tree to go eat it. And there's cotton candy. Mountains of it. And chocolate milk, and malts. And there's a genie. A magic genie. And he can't wait to grant your wishes." Wow. I've never been to any Disneyland but I'm sure that these things are too good to be in that place!

Overall it's super cheesy and very entertaining, even for people who have seen Rambo before!