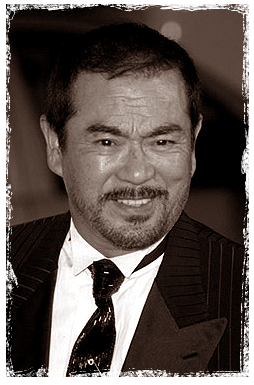 Shinichi "Sonny" Chiba was born on January 22nd 1939 in Fukuoka, Japan. Chiba's first movie appearance was in 1959 in the TV-series Nana-iro kamen, but we don't know much about this small low budget presentation. Sonny starred in films like the sci-fi B-movie Invasion of The Neptune Men (1965) then he did four 60 minute crime films with Director Kinji Fukasaku. His first real hit after a few non-stop fighting flicks with no budget, was The Streetfighter. In the role of Takuma "Terry" Tsurugi, Chiba gave a wonderful performance in this over the top bloody Martial Arts fest with no physical limits. It soon became an absolute cult classic. In the same year Chiba did the sequel Return of The Streetfighter and The Streetfighter's Last Revenge he completed his bloody cool trilogy of fine Japanese Martial Arts films. In Tony Scott's True Romance (1993) written by Quentin Tarantino you can see the character of Clarence (Christian Slater) attending a film festival with The Streetfighter triple feature playing.

With other gory flicks like The Bodyguard and the Street Fighter spin-off Sister Streetfighter Chiba had a massive amount of fans comparing him to the late Bruce Lee. Chiba became a legend in his own right because of the bloody style of his movies. Bruce Lee's movies were gory as well, but not as much as Chiba's. Perhaps that's one of the reasons why Writer-Director Quentin Tarantino (Kill Bill) calls Chiba "the greatest star of action cinema".

After some Yakuza, Sci Fi and Martial Arts movies like Okinawa jû-nen sensô (1978) Chiba did one of the coolest shows ever on TV: The series Hattori Hanzô: Shadow Warriors (1980). This legendary Samurai meets Martial Arts series became a cult classic like Chiba's Streetfighter movies and the last episodes with Chiba were made in 1985 as Kage no Gundan: Bakumatsu hen (1985). Chiba starred as the great fighter and swordmaster Hattori Hanzo and showed the world that Bruce Lee was not the only one who could really fight. After this big hit Chiba did films like Shôgun Iemitsu no ranshin - Gekitotsu (1989) (classic fighting Kung Fu) and was also starring in Kinji Fukasaku's action renegade film: Itsuka giragirasuruhi (1992).

Chiba came back to screen after a few flops with Takashi Miike's action renegade hit Deadly Outlaw: Rekka (2002) and Kenta Fukasaku's Battle Royale II (2003). But later in 2003, he got one of the coolest movie parts ever: Another Hattori Hanzo role in Quentin Tarantino's Grindhouse homage Kill Bill Vol. 1 (2003). He was Tarantino's "Hattori Hanzo the 100th" and got his whole own chapter called "The Man from Okinawa". Chiba also did some of the sword fight choreography in Kill Bill: Vol. 1 because he really knows how to chop a head off onscreen. Sonny Chiba is now back on the big screen because of the great modern directors like Takashi Miike and Quentin Tarantino. We hope to see more of this cinema legend!

The following 27 pages are in this category, out of 27 total.