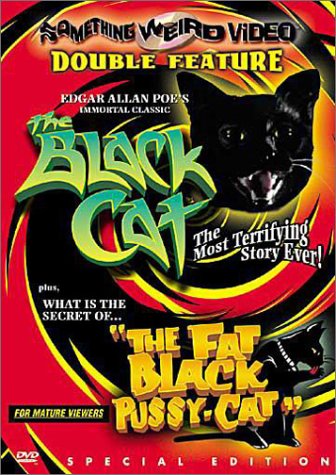 Krazy killers and frisky felines prowl the dark alleys of this horror kitty double feature! "The Black Cat" (1965) - After celebrating his second wedding anniversary by trying to strangle his wife, Lou, a psychotic writer, seeks solace from Pluto, The Black Cat his wife gave him as a present. But since Pluto isn't in a partying mood, Lou plucks out the cat's right eye and electrocutes him. After a few months getting shock treatment in a sanitarium, loony Lou makes friends with a brand new kitty that also happens to have a "bad right eye." "The Fat Black Pussycat" (1963) - The only witness to a bunch of bloody beatnik murders in Greenwich Village is The Fat Black Pussycat, whose kitty kat ESP is being affected by the "brainwaves" of the schizophrenic killer whose sexual preference also changes while in "a schizoid state."Deleted Prologue for "The Black Cat;" Over 30 Minutes of Deleted Scenes, Including a Different Ending, from the Original Version of "The Fat Black Pussycat;" Gallery of "Fat Black Pussycat" Publicity Photos; Kitty Kat Trailers for "The Black Cat," "The Fat Black Pussycat," "The Cats," "Confessions of a Psycho Cat," "The Girl From Pussycat," "The House of Cats," "Puss 'N Boots," "Pussycats Paradise," and "The Tomcat;" Kitty Kat Short Subject: Stripper Margie La Mont, The Cat Girl; Gallery of Horror Drive-In Exploitation Art; Horrorama Radio-Spot Rarities; NOTE: "The Black Cat" is 1.85:1, "The Fat Black Pussycat" is Full Frame.