Snake in The Monkey's Shadow/Review

< Snake in The Monkey's Shadow

Widely regarded as one of the greatest kung fu films of its time, Snake in the Monkey's Shadow is a prime example of the "animal style" martial arts film. In the first few minutes of the movie, we meet Hsia Sia (Charlie Chan Yiu Kam) who is challenged to a battle by the monkey style master Koo Ting-sang (Pomson Shi). Koo makes his memorable entrance by jumping from tree to tree like a monkey. The two warriors have a very exciting face-off as Hsia Sa begins his deadly snake style attack, hissing loudly "SSSSS!!!". After Koo proves Hsia Sa's snake style is no match for his monkey technique, Hsia runs away whimpering, leaving Koo triumphant. 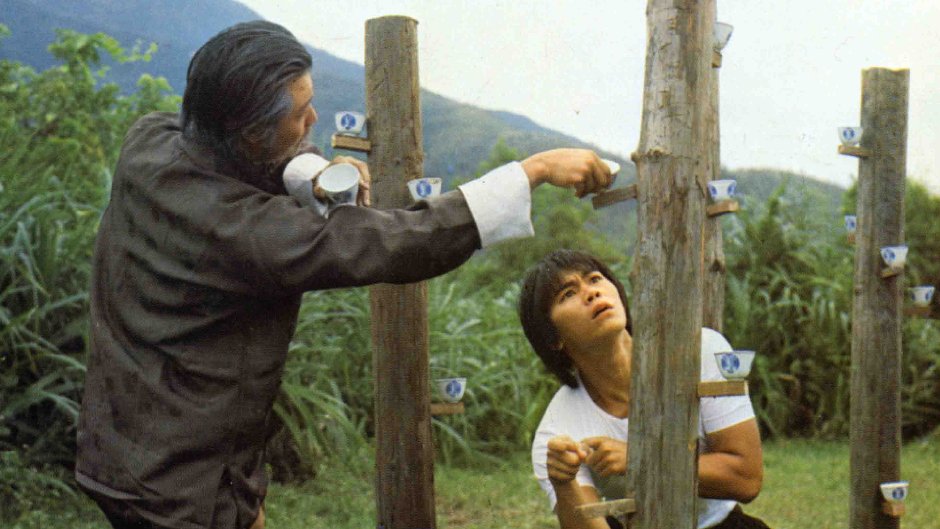 In a small town, Lung (John Cheung) is an poor fishmonger's son. When he hears some men training in the town martial arts school nearby, he climbs up an alley wall where he watches Teacher Ho (Hau Chiu Sing) showing his students the drunken style of kung fu. Its a really fun sequence as Teacher Ho stumbles to and fro in a sloppy then controlled balletic manner. Suddenly Teacher Ho spots Lung spying on him from above and yells out, scaring Lung who jumps from his perch and runs back to his parents' fish store. Lung is sent to bring some fish to the Yans, a local rich family. When Lung arrives with their fish he is harassed by one of the Yan brothers. The two have a comical exchange, but things quickly become more serious when the Yans refuse to take Lung's fish and proceed to tie him up, turning him into their pet "dog". After being completely humiliated, Lung decides he needs to get Teacher Ho to show him the ways of kung fu. Lung tries his best to win Teacher Ho's acceptance but he isnt let the school. To get rid of him, Ho gets Lung drunk on rice wine and he passes out, waking up in the woods right next to a hissing cobra! Luckily for Lung, Koo comes walking along and uses his monkey style to kill the poisonous creature. Lung is grateful to Koo and arrives the next day with some wine and food as a gift for saving his life. Lung inquires about Koo's monkey technique. Koo explains to Lung that "his" teacher is in fact his pet...a real monkey! Lung finds this strange. Suddenly, The Yans arrive to try to take Koo's land, Lung defends his friend using his drunken style, but only manages to make even bigger enemies of the Yan clan.

Lung heads back to the school where Teacher Ho decides to let him work as a "cleaner up" doing various odd jobs. While Lung is working at the school, he watches the others training and starts practicing on his own in his free time. After much fighting to get a spot in the school and taunting the other students who he considers a 'bunch of idiots', Teacher Ho finally lets Lung in. Ho teaches Lung the drunken style and Lung shows alot of promise. One day, the Yans show up at the school to cause problems due to Lung's defense of Koo. This show of disrespect causes Teacher Ho to kick all their asses including Father Yan, who after being badly hurt by Ho, decides he needs to hire some really tough kung fu fighters to get back at him. Thats when he brings in our old friend Hsia Sa and his new partner (Wilson Tong) to come to town and get rid of Teacher Ho. Ho and Lung fight Hsia Sa and the other snake fighter, but sadly, Teacher Ho is killed and they leave Lung badly injured. Lung tries to make it to Koo's cabin in the woods but succumbs to his wounds and passes out. He wakes up in Koo's home where he slowly recovers from his injuries. Koo tells Lung to forget trying to get revenge and just let things be. Soon after, Koo himself is confronted by his old nemesis Hsia Sa and his friend. Koo and the two snake fighters get into an epic snake vs. monkey battle. Koo puts up a good fight but is overtaken by the treacherous two. Lung, who is watching nearby, tries to help his friend Koo but its too late and Koo is killed. Lung swears to Hsia Sa that he will kill him the next time he sees him. One day, Lung comes across Koo's pet monkey fighting a real snake. (NOTE: This sequence of the film was edited in many VHS versions but is shown uncut in the Red Sun DVD release). The monkey ultimately kills the snake. After witnessing this, Lung suddenly taps into his inner monkey fu genius. We get some very cool training sequences here as Lung dodges rotating beams and balances on some earthenware pots, sharpening his skills. Lung finally meets Hsia Sa and his partner once again. In this exciting showdown, Lung picks up where his mentors Ho and Koo left off, combining the Drunken and Monkey styles together to be twice as deadly! The kung fu action in this movie is choreographed really well. If you are a fan of animal style martial arts (Snake, Monkey, Tiger, Praying Mantis etc) you will love this movie and enjoy how the techniques are displayed.