"Unscrupulous adventurers take advantage of these (voodoo) superstitions to put docile native girls under their power, transforming them into zombies so they will submit to their primitive instincts……" a somber narrator intones while viewers witness a fog-enshrouded graveyard set covered in cob webs and lit by dozens of torches sending thick flames into the air. Across the burial site marches a sinister-looking dwarf (Santanon) dressed in black top-hat, matching blazer, white gloves, and dark glasses; holding a machete and what appears to be a pressed, mummified bat creature with a pointy tail in one hand, while a live chicken and voodoo doll covered in pins hang from the other.

Occasionally Santanon lets out a fit of laughter, exposing rows of short, evenly spaced teeth. Following Santanon is a tall, lean man (Quintin Bulnes as Klinsor) dressed in a dirty white linen suit, carrying two shovels and nervously observing his surroundings while following his guide past grave markers and skeletons. Thunder crashes, the men stop before a fresh grave as the little man lets loose more laughter, grabs a shovel, and starts uncovering the gravesite; Klinsor digs in also, sweating profusely as a pine coffin eventually appears beneath the earth. 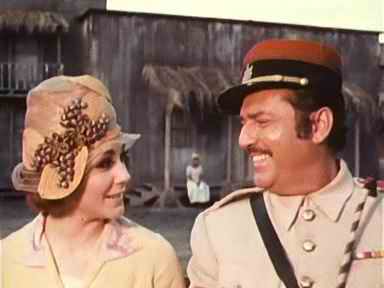 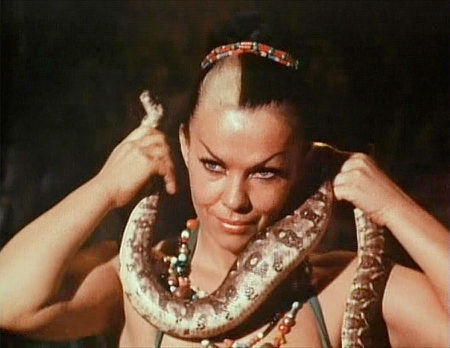 Things get a little kinky; Klinsor stands after caressing the coffin and finds the little guy pensively stroking the man's right hand, placing it affectionately against his cheek. Disgusted, Klinsor pulls back his hand, and the little one tries once more, grasping the man's buttocks before being summarily dispelled a second time. The rejected and visibly shaken Santanon grimaces, and whacks off the head of the chicken with his machete, waving the flapping bird by its feet across the coffin several times while gnashing his teeth and rasping in anger.

The coffin lid opens, a young black woman stirs from inside, removes the gauze wrapped around her and accepts the caress of Klinsor's outstretched hand. Suddenly, Klinsor drops to the girl's face, hungrily kissing her - Santanon watches, making guttural noises while clasping the bloodied chicken to his cheek and rubbing its feet across the side of his face in a fit of apparent arousal.

All of this grave robbing commences without dialogue, an attention grabbing pre-credits sequence establishing Snake People as a visual tour-de-force with some effectively creepy acting.

Unfortunately, the plot surrounding some effective voodoo tomfoolery doesn't buoy the well-done ceremony scenes - characters from outside are brought to the tiny island under the ridiculous pretense of one Captain Pierre Labesch (Rafael Bertrand) of the French Foreign Legion escorting temperance advocate Annabella Vandenberg (Mexican singing star Julissa) on her mission to rid the world of alcohol. Annabella's rich Uncle, Carl van Molder (Boris Karloff) lives on the remote island of Corbai and she asks him to fund her cause, which is christened with the ridiculous moniker "International Anti-Saloon League." Annabella is introduced to local constable, Lieutenant Andrew Wilhelm (Carlos East), and of course, the two fall in love, setting up a trite boy-rescues-girl finale.

Uncle Carl is very protective of his island natives and their strange superstitions while Captain Labesch grows increasingly agitated by the unfamiliar burial ceremonies and whisperings of corpses being re-animated and put to work in the sugar cane fields. Damballah, secretive voodoo high-priest of the island, remains a mysterious topic of conversation, shown attending the various voodoo ceremonies walking a graveyard tucked inside a cave(?) dressed like a goth version of Claude Rains' bandaged scientist from The Invisible Man.

Captain Labesch stirs up violence while pursuing village voodoo practitioners in his attempts to rid the island natives of their superstitions; its members retaliate by slowly killing off Labesch's small group of bare-footed policemen, using blow guns or the less pedestrian method of unleashing a group of cannibal zombie women on them! Meanwhile, Klinsor continues practicing his depraved sexuality, enjoying private wedding ceremonies with his newly revived zombie bride and requesting back rubs from the comfort of his mattress. 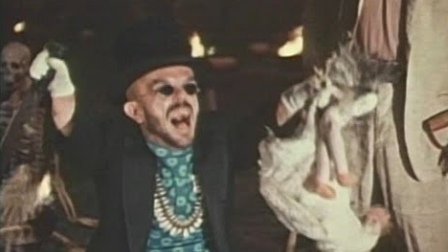 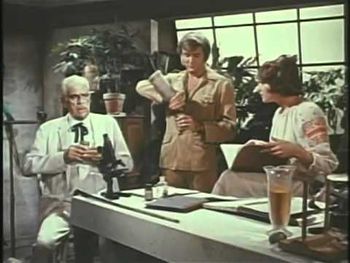 Yolanda "Tongolele" Montes, a highly successful and still-active entertainer in Mexican burlesque, plays Karloff's mysterious house maid and voodoo participant, Kalea. Kalea dances with a giant boa constrictor draped over her neck, dressed in a mini-grass skirt and bikini top while shaking her ample hips to pounding bongo drums. Kalea is the feared arbiter of acceptable behavior among the voodoo practitioners; after discovering Klinsor and his newest acquisition, she uses her awesome powers of thought alone to set his misbehaving zombie on fire by simply staring disapprovingly at her with her large mascaraed eyes.

Annabella Vandenberg becomes Kalea's target as the ultimate sacrifice necessary to conjure up the big-daddy of voodoo himself called "Baron Zombdie." Part of the pre-ceremony preparation involves Kalea and the little dude sneaking into Annabella's bedroom one night and letting a snake climb across her (off-screen) disrobed body.

When Annabella disappears, Captain Labesch formulates a plan to infiltrate the voodoo ceremony she's scheduled for as boyfriend Andrew tags along. Conspicuously attending as the only two voodoo participants "hidden" in black hoods, the pair are naturally discovered as imposters and Labesch takes a snake bite from Tongolele's pet, while managing to shoot Damballah (gasp, it's Karloff) before throwing his body into a fire pit (a clumsy shot of an obvious dummy thrown onto burning embers) which ignites a series of explosives stuffed into Labesch's pocket belt. The captain's final act effectively blows the entire cemetery into oblivion while Annabella and Andrew manage a narrow escape.

Snake People is an odd movie, tacky voodoo scenarios amped up by a few "mondo" style shocks (a real snake is shown actually biting the arm of a ceremony participant, and the on-camera chicken beheading during the opening scene) make it interesting, but it ultimately fails to engage the audience once "boy meets girl" introduces a more pedestrian route to a well-worn "rescue the girl in distress" denouement. Snake People abandons the more ghoulish possibilities perfectly embodied by the sexually-charged opening, Klinsor's unnatural hankering for voodoo love, and the handful of truly unique characters traipsing around fog-enshrouded cemeteries; the group of cannibal zombie women also sadly underutilized, making only a brief appearance to ambush a lone policeman.

Ironically, Santanon, the little guy who gives such a creepy performance, is ignominiously reduced to the simplistic role of "midget" displayed at the very bottom of Snake People's sparse closing credits!! Santanon deserves much more recognition for his creepily unforgettable contribution.

Boris Karloff literally worked until the end of his life, fulfilling a final four-movie contract in 1968 drawn up between Columbia Pictures and Mexican Azteca Films; Fear Chamber, House of Evil, Incredible Invasion and Snake People are the end results of his final performances. Karloff, too ill to travel, suffered from emphysema, was unable to stand or walk for very long periods of time, and required oxygen and rest between takes. Actors and crew from Mexico traveled to Los Angeles where the maestro's scenes were filmed with the aid of AIP stalwart Jack Hill (Spider Baby).