Slumber Party Massacre is 80's gold. Also known as "Sleepless Nights", it was written by feminist activist Rita Mae Brown. Brown wrote Slumber Party Massacre as a parody of all the slasher movies that came before it, but it wasn't filmed as a parody so they changed the name. This is the reason why you see a lot of goofy humor (woman eating pizza off of the dead pizza boy) in the film. 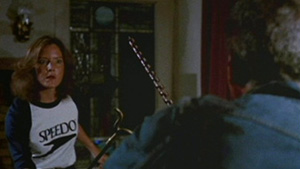 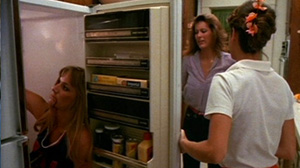 The story starts with an 18 year old girl who is having a slumber party. The new girl at school (who is better at playing basketball) isn't invited, so she stays home. Her house happens (oddly enough) to be across the street from the party but when a psychopath shows up and starts killing people with his power drill, I guess she's real happy that she never got invited!

Like most films from this genre you see tons of eye candy to keep you entertained throughout the film and Slumber Party Massacre surely does that. You don't really know why this guy is going through the school killing people other than the obvious (he's crazy!) but that makes it even scarier. The killer is very scary, not cheesy as you think he's gonna be. You see him holding the drill looking for his next victim. Slumber Party Massacre is a great start if you're new to the slasher genre.