Simon - King of the Witches/Review

< Simon - King of the Witches

Simon Sinestrari (Andrew Prine) is what you'd call a blue-collar warlock. He lives in a storm drain, gets hassled by the cops, and is just trying to make a living in 1970's L.A. One night, Simon gets thrown in the slammer for vagrancy and hooks up (in a mentor role) with young hustler Turk (George Paulsin, who looks uncannily like a young Matt Damon) who introduces him to his wealthy "friend" Hercules (Gerald York). Hercules like to throw swinging parties where the Bohemian and political cognescenti intermix and generally get high and screw. Simon makes a few bucks by selling home made talismans and gradually moves up to tarot card readings and casting spells for cash. At one of these parties, Simon becomes enamoured with Hercules' house girl Linda (Brenda Scott) and tells her that they've "met before". By the look in her eyes, Linda agrees. Unfortunately for Simon, Linda is the daughter of the local D.A. (Norman Burton) and he doesn't take too kindly to his daughter seeing a self-professed "real magician". To make matters worse, one of Hercules' pals bounces a check to Simon who used that bread as a down payment on a new basement (naturally) apartment and he gets tossed in the can for his troubles. Once Simon gets out, he and Hercules put a death curse on the check writer who dies via "magic". Hercules has to bear half of the blame for the death (according to Simon), and he is visited by a red orb that proves to him that Simon is indeed what he claims to be. The D.A. ,who doesn't see that his daughter is clearly a drug addict, comes down hard on Simon and the rest of that circle and Simon's hand is forced into unleashing hell on to the corrupt politicos who are after him. Will Simon survive this unholy war? Will Turk get rid of his incessant erection (more on this later)? You have to see it to believe it! 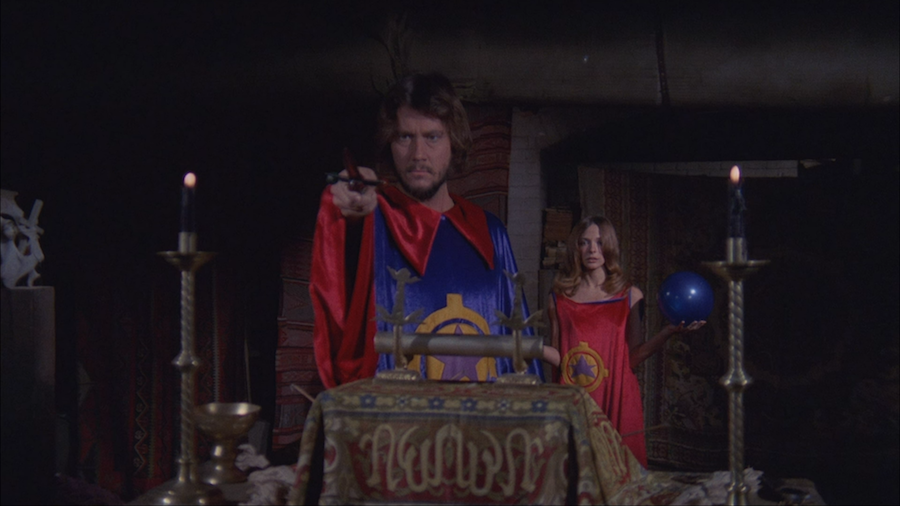 I absolutely LOVED this movie. It's been one of those movies I've heard about for a long time, but could only track down thru grey market dealers and, even then, a lot of times their print was from a TV broadcast. I'm glad I waited to see the Dark Sky DVD as it is a pristine, UNCUT anamorphic widescreen print that does the film justice. Prine absolutely owns this film from frame one. He talks directly to the camera introducing us to his world and convinces us that he is exactly what he says he is - a witch. There wasn't a moment throughout the movie where I felt that he wasn't the real McCoy, even when other characters in his world doubted his authenticity. He plays Simon with nonchalance that the character deserves, rather than going over the top and making us think he's just some doped-up hippie. There's a scene where he's making more of the talismans to sell at Hercules' parties where he looks like he's done this a million times before - that's great acting. Prine is an actor who uses facial expressions and body language to convey a lot of emotions and thoughts that enrich the character beyond the screenplay. I could not imagine anyone else playing the role and I don't think that the film would have worked nowhere near as well without him. I watched the movie thinking, if I came across this guy (Simon) in real life, would I believe him? The answer was yes, absolutely. Obviously, the younger characters like Turk and Linda do because of the time period this film was made and America's youth were questioning both authority and their elders and supported ANYTHING counter-culture. The supporting cast is good, but this is Prine's show all the way. The aforementioned scene where Simon has put a "Viagra" spell on Turk where he has a long standing (pun intended) erection he needs to get rid of is priceless. This scene works so well because of the chemistry and delivery of Prine and Paulsin. In other hands this scene would have come up as a lame gag, but with these two actors, it works on it's own as a real (if humorous) problem the two characters would likely encounter. If a movie can take you away for 90 minutes and make you believe it's situation, then you know it has done it's job - just like Simon does.

While it kind of falls apart toward the end, I think it works remarkably well for a low-budget black comedy/counter-culture oddity. While marketed as a horror movie, it's anything but. A few dead bodies and witchcraft a horror movie do not make. It's more of a character piece that takes you back to a time when movies were made because of great stories that needed to be told rather than for a quick buck. I've never seen anything like it, and doubt I ever will again. No one in Hollywood (or outside of it) would be ballsy enough to make an odd little gem like this in today's world. You just can't market a film like this. You never could. But don't let that stop you from believing in one of grindhouse cinema's most original masterpieces.