"Science created him. Now Chuck Norris must destroy him." This tagline drew my attention immediately. I mean, it looked like Silent Rage was going to be one of the most awesome movies I'd ever seen. It's like Chuck Norris vs. The Terminator. But after watching it, I was pretty disappointed by many factors. First, it's not a supernatural-action movie. It's more like Chuck Norris vs. Michael Myers.

Sheriff Daniel (played by Chuck Norris) hunts down John Kirby (Brian Libby), a psycho-maniac killer, and after Daniel catches him, John breaks free and grabs a gun so the police decide to shoot him. Then, at the local hospital, Dr. Spires decides to save Kirby by using a new experimental formula to make him superhuman. Of course, John proceeds to kill a lot of people again only now he's unstopppable so Daniel must catch him before things get even worse. 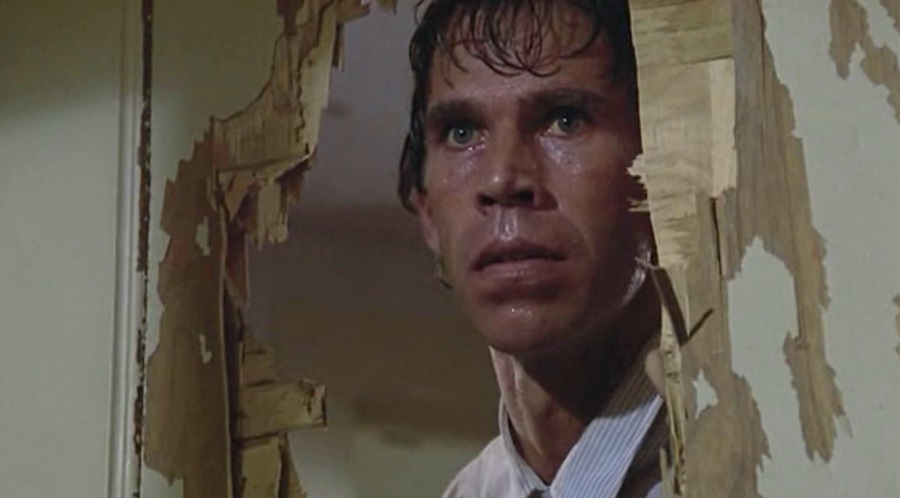 It looks like a really interesting premise at first, but, unfortunately, the film is pretty boring. It has two subplots that take too long and drag me out of the main one. Seriously, there was one point where I almost completely forgot about John Kirby. One is a love story between Daniel and the doctor's sister. There's even a montage while they have sex! I'm not joking. It made me wonder what I was watching because I think it might have more romantic scenes than Michael Bay's Pearl Harbor does. Next, there's another in which Daniel fights some outlaw bikers. This is much better since we have the fight scenes that show us how awesome Chuck Norris' superkick is. But, let's be honest, we expect to see Chuck fight against John Kirby, the immortal killer, don't we? Well sadly the things that you've been waiting for only arrive in the last portion of the film.

Luckily, Silent Rage does make a really good effort to be a slasher film. It has impressive extended POV shots that will raise the audiences' suspense, a very cool theme song and the killer who dresses similarly to Michael Myers in Halloween. In fact, I think he basically IS Michael Myers. He's mentally ill, he's a serial killer, he wears a similar suit (sans Shatner mask) and (SPOILER ALERT) he survives in the end. To me, the ending doesn't surprise me at all since Chuck doesn't use the same Connor MacLeod (Highlander) method to kill immortal people by cutting off their head.

In conclusion, this film should be watched ONLY while you're drunk or in case you and your friends want to riff on it MST3K style.