After a run down tour boat captained by a half-made John Carradine collides with a "ghost" ship, two vacationing couples and the boat's crew find themselves stranded on a desolate island. After braving the jungle (and being watched by some rather pasty faced fellows clad in old Nazi SS uniforms), our party comes across the ruins of an abandoned hotel. However, the hotel is also serving as the home of a half-crazed, German scientist (a ravaged Peter Cushing) who - after an untimely death or two - informs them that the island is also home to the last remaining outfit of Hitler's war machine. In short, Nazi zombies! Unfortunately for our survivors, crazy as the story might sound it's also true and soon they find themselves trapped and hunted by a seemingly unstoppable army of the Aryan undead. 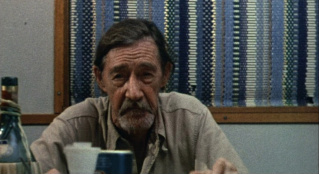 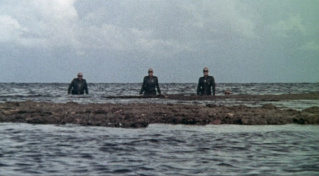 Considering the competition, saying that Shock Waves is arguably the best Nazi zombie movie ever made may seem like a back-handed compliment. However, this low budget horror film deserves its reputation. Director Ken Weiderhorn rejected the over-the-top gore and easy shocks that characterized so many of the other zombie films made in the '70s and instead concentrated on creating a truly eerie atmosphere of increasing dread and hopelessness. The film's grainy look, desolate locations, ominous electronic score, and almost relentless action creates a truly unique, dreamlike experience. As such, it's that rare horror film that - while it may not make you scream while watching it - actually sticks in the viewer's mind long after the final credits roll. The film's most famous scene - featuring zombie after zombie emerging from the sea and marching towards the island - is indeed one of the most truly nightmarish images in the history of horror. 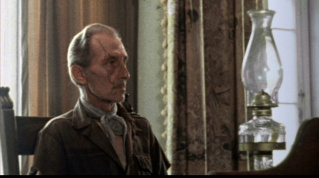 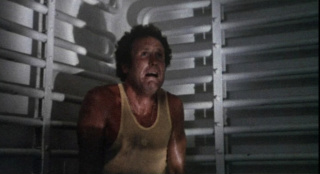 The "human" cast is a mixed bag and the various performances range from being merely adequate to borderline histrionic. The two best performances are delivered by Luke Halpin (who brings a low key intensity to his role as the film's hero) and the aforementioned Peter Cushing. Indeed, Cushing's performance here might be surprising to those who remember him only as the coolly sadistic Baron Frankenstein or Grand Moff Tarkin. Hardly slick, Cushing's crazed fugitive scientist is almost feral and he explains the zombie's origins with such fearful power that it doesn't even matter that much of what he says makes absolutely no sense. Even if Cushing's German accent is hardly perfect, his performance is. The film's leading lady is a young Brooke Adams who later became a minor star in the early '80s and, even if her performance is hardly a revelation, she is appealing and likeable in the role. As for the rest, Jack Davidson has a few good scenes as an obnoxious used car salesman and John Carradine is ... well, John Carradine. However, the film's strongest performances come, of course, from the zombies. Still clad in their old uniforms and all possessing the same expressionless face, these zombies are never less than believable as a force of supernatural evil. Whether suddenly materializing out of the dark shadows that dominate the film or relentlessly pursuing their prey (unlike George A. Romero's comical flesh eaters, these zombies are aggressive, fast, and clever), the anonymous actors playing these monsters truly make Shock Waves a unique and nightmarish experience in horror.