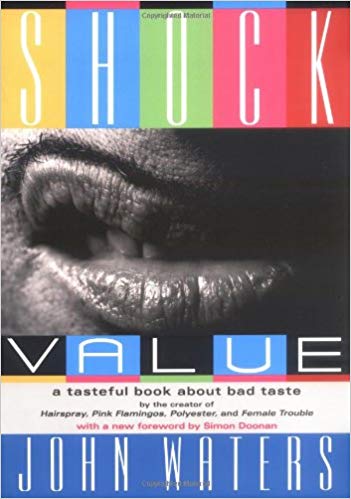 Originally published in 1981, Shock Value: A Tasteful Book About Bad Taste was director/screenwriter John Waters' first autobiography, covering his early life and career through Desperate Living, right before he started work on Polyester, which was his first small step toward the mainstream. There are chapters covering the productions of Pink Flamingos, Female Trouble and Desperate Living, with the chapter "The Hillbilly Ripoffs" covering Mondo Trasho and Multiple Maniacs. Waters also discusses violence, attending trials, Baltimore, Edith Massey, casting, fame (well, by his standards at the time) and his relationship with his parents. There is also an interview with Divine and a chapter with interviews with two of Waters' biggest influences, Russ Meyer and Herschell Gordon Lewis.

This is absolutely essential Waters. It is filled with all kinds of great stories from the period of his career covered on this site. Highly recommended.