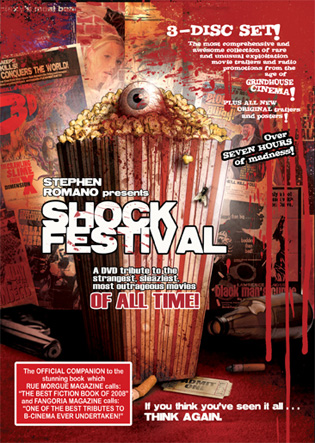 A 3-Disc (2 DVD/1 CD) Audio and Video Exploitation Extravaganza Featuring Over 7 Hours of the Most Rare and Unusual Exploitation Trailers, TV Ads and Radio Spots from the Age of GRINDHOUSE CINEMA!

Plus original new content inspired by the amazing fictional b-movie world of Stephen Romano’s exploitation novel, SHOCK FESTIVAL. Take a wild journey through the exploitation movie scenes of the 1970s and 1980s with this collection of hundreds of actual previews of coming attractions, television commercials and radio spots for the sleaziest, sexiest most off-the-wall films ever made - all digitally re-mastered from Original Film Elements.

Find yourself thrust into a world of madmen and ghouls, perverts and lusty ladies – and wait till you get a load of all the special extra features we’ve cooked up just for this release! Interviews, a SHOCK FESTIVAL poster, original music and a batch of specially produced trailers based on the amazing fictional b-movie worlds of Stephen Romano’s acclaimed novel, SHOCK FESTIVAL. This must-have collector’s set includes over 7 hours of amazing stuff you won’t find anywhere else!

Out of all the classic exploitation film trailer compilations on DVD, Stephen Romano's Shock Festival has got to be the best single release to date. It contains 3 Discs of audio/video gems from the good ol days of grindhouse movies and even a few titles I didnt expect to see thrown in (Albert Pyun's Captain America?!). I admit, I was fully satisfied with the initial presentation, although when I listened to the audio commentaries I got a little annoyed because while the people behind the production did a fantastic job putting it together, there's a certain air of disrespect aimed towards the movies which, as a longtime fan kind of puts me off. I'd like to use this DVD review as a way to address some issues I have with the whole retro grindhouse/cult cinema fan persona online these days. First, I've never liked the commonly repeated negative labels regarding older exploitation movies. "Crap", "Trash", "Shit" are certain words that bother me the most. I simply don't get why people who claim to champion exploitation cinema are at the same time looking down on them as less than worthy or not good. Why would you put something down but then go out of your way to put out a great product like this one? Maybe because it's the cool thing to do these days? I'm not sure, but I don't really appreciate it. As most movie fans already know, not every film (B-movie or big budget studio film) is a cinematic masterpiece like Citizen Kane. Personally, Ive seen just as many terrible big studio produced films as low budget exploitation films. Which raises the question: Are the directors of the exploitation films given enough credit for making generally entertaining movies for much lower costs than their mega studio rivals? I think this is one important thing that should be taken into consideration before people blindly dismiss the movies as a completely lower form of cinema. Second, to me, exploitation fans who spend their time saying they love the movies, yet refer to the films as "crap", "junk" etc can be compared to giving their best friend a pat on the back while telling him he sucks. I'll never understand that kind of immature, two faced attitude when it comes to "fans of exploitation and cult cinema". Its just a big turn off to me personally.

It's not my intention to offend the truly dedicated grindhouse fans. You know, the ones that genuinely love movies and aren't watching certain films simply because they think they're a big joke to laugh at. Those people know who they are. I've actually had these things on my mind for awhile now and this was a perfect opportunity to express my feelings.

Interview: Independent International Pictures' producer Sam Sherman is interviewed and its my favorite extra feature on the DVD set. Sam talks in detail about how he created the exploitation campaigns for several of his company's features including the Blood Island films. It was great to hear from a veteran of the industry who was right in the center of when the grindhouses and drive-ins were showing the types of films we love here.

Final Word: This DVD/CD set was sort of a bittersweet experience for me. I loved watching the trailers and getting a bonus CD of cool radio spots, but I'm not too sure if the people behind it all truly love/respect the movies or are just poking fun at them. The whole proceeding feels like they're subliminally saying "LETS CELEBRATE TERRIBLE MOVIES!". I simply don't feel that way about ALL of classic exploitation cinema and I'm trying to keep this website free from having that kind of cliche stigma. I honestly think every film should be given a chance before its unjustly berated. This aspect makes it tough for me to praise the producers of Shock Festival. I also have a hard time listening to audio commentaries when people are going into it with an attitude that what they are discussing isn't good. Its like: throw out some film information then flippantly refer to the movie as crap. Its just not what I want to spend my time with.

In closing, I certainly dont want to dissuade anyone from buying this release, in fact I hope people really enjoy the trailers and other features and can overlook some of the aspects of Shock Festival that I didn't really dig.