In what looks like some snazzy penthouse apartment in New York, we get a good look at Brenda (no credit given to the actress) getting her relaxation on in a bathtub. Feeling some sense of non-pleasure, she summons her boyfriend, Tony (Adam Clyde) to get up out of bed to fulfill Brenda's needs in the bathtub (even though he's suffering from a hangover at the moment) We later find out that Tony is just a gigolo (everywhere he goes) but Brenda (A wealthy president of some kind of company) loves the guy and wants to keep it under wraps. 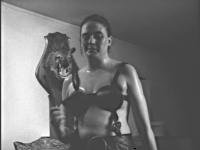 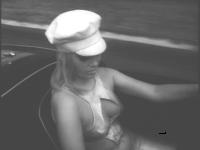 We then take a trip to another vicinity--Or what looks like another frickin' U.S. state! As the morning dawns and we get a nice sight of four females sprawled out all over some house. The only inhabitant of the house who appears to be up and at it is Good ol' "Big Shim" (Marni Castle), the baddest dyke these eyes have ever laid eyes on! As the other girls wake up, they start to complain that they want a man (keep in mind, just at the sight of things, I thought this was supposed to be some sort of cathouse, but come to find out later that all these girls are supposed to be escaped convicts) Big Shim, who controls the house as well as the girls, decides to give her girls some satisfaction by calling for some male goods. But the person she ends up getting a hold of happens to be Tony! But Tony, keeping true to gigolo form, decides to answer the call by showing up at the "She Mob's pad", only to find out that Big Shim is gonna kidnap his ass and demand $100,000 for it! But Brenda ain't gonna go with the script. She's gonna hire "Sweety East-Girl detective" (Monique Duval) to track down Brenda's love meat, wipe out Big Shim's mob, and win Tony in the end. Oops! Hope I didn't give too much away!

This movie seemed to have some sort of well-respected reputation in the adult/cult/underground circuit that was going on around this time. And surely, it must've caused some kind of sensation since some Grindhouse/Exploitation scholars seem to hold this movie in high regard. And there's no doubt that the potential is there. It was probably the first skin-flick to successfully convey both the roughie and action flick altogether. Plus, you've got a great villain with "Big Shim" holding the grounds together as Queen Bee. And combating with what one could see as the ultimate nemesis in "Sweety East-Girl detective" along with the notable reversal of the strongly desired male character being forced to play the damsel-in-distress! It sure sounds like a winner and in it's time, it likely was. And there lies the problem. The results aren't as satisfactory for today's audiences. The movie has aged in comical fashion, which could be a good thing in the long haul. It's just that due to the hype, I was expecting something much more grand. But that's not to say that I still didn't enjoy this one. I gotta say that I still had quite a good time with it and it's likely that the next time I give this another viewing, I'll have a different perspective and see what our Forefathers in Grindhouse/Exploitation cinema loved the first time around.