Released in the Summer of 1967, Cinemation Industries (the company who brought you pictures with titles like I Drink Your Blood, The Sadist and The Night God Screamed) released Shanty Tramp, a fully foul black and white 72 minute film about a non-conformist (“trampy”) Southern gal who: beds a corrupt traveling evangelist, fends off a violent biker, encourages a semi-pornographic dance competition, hooks up with an impressionable—but unable to resist her charms—African American mama’s “boy,” sets into motion an explosive car crash, kills an unsuspecting family member, revels in a barroom brawl, seduces an innocent man and then cries rape, and has as an incestuous relationship with her severely alcoholic father (Yes, you read correctly!).

In the lead as Lee Holland, Eleanor Vaill has the overripe and over-painted face and figure of a Las Vegas burlesque star. Her dead-voiced line readings—she’s not an “actress” but, instead, a “presence,” add a grit and realness to this already gritty and real Drive-In novelty. 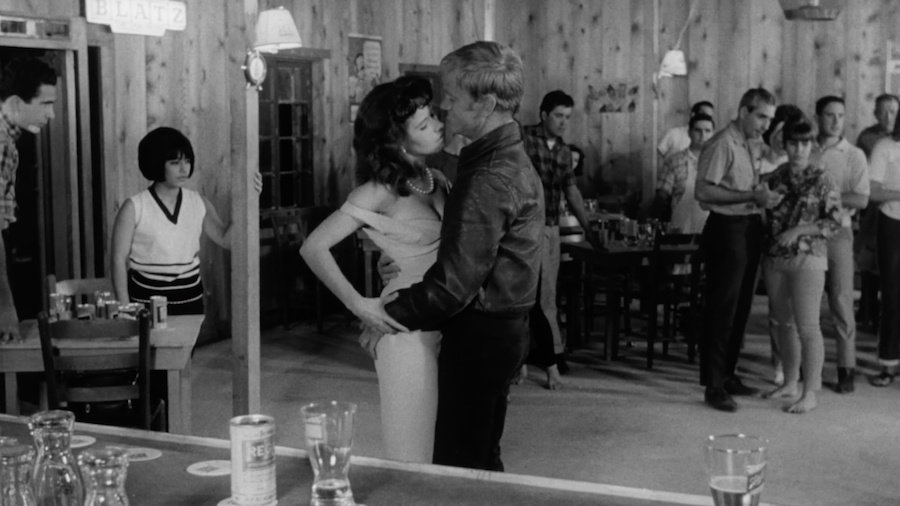 Filling out the cast are Lawrence Tobin as “Savage,” a rabble-rousing, leather jacketed motorcycle gang leader, Lewis Galen as Daniel, a young man whose mama fairly warns him: “get your mind off that ole’ shanty tramp,” and Kenneth Douglas as Eleanor’s unwashed and generally repulsive sharecropper father.

At times slow and burdened by the overuse of the (Public Domain) spiritual song “When The Saints Come Marching In,” Shanty Tramp is an off-the-beaten-path must-see. A slice-of-lurid-life painted with broad, garish and salacious strokes and embellished with sixties youth culture, Rock & Roll music, hicks, violence and illicit backwoods activities (Moonshine anyone?!). Triumphant no-budget trash.