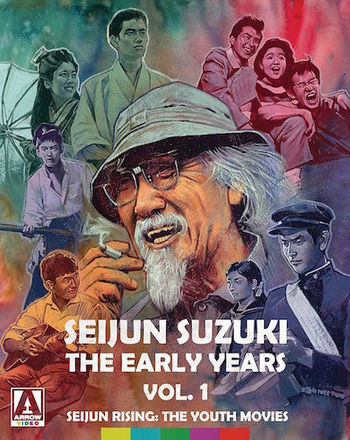 Making their home-video debuts outside Japan, this diverse selection of Nikkatsu youth movies (seishun eiga) charts the evolving style of the B-movie maverick best known for the cult classics Tokyo Drifter (1966) and Branded to Kill (1967).

The Boy Who Came Back (1958 marks the first appearances of “Nikkatsu Diamond Guys” and regular Suzuki collaborators Akira Kobayashi and Jo Shishido, with Kobayashi cast as the hot-headed hoodlum fresh out of reform school who struggles to make a clean break with his tearaway past. The Wind-of-Youth Group Crosses the Mountain Pass (1961) is a carnivalesque tale of a young student who hooks up with a down-at-heels travelling circus troupe. Teenage Yakuza (1962) stars Tamio Kawaji as the high-school vigilante protecting his community from the extortions of mobsters from a neighbouring city. The Incorrigible (1963) and Born Under Crossed Stars (1965), both based on Toko Kon’s novels about young love, represent Suzuki’s first films set in the 1920s era later celebrated in his critically-regarded Taisho Trilogy.