Salo, Or The 120 Days of Sodom/Review

Set in Nazi-occupied Italy in 1944, Salo, or the 120 Days of Sodom, takes the Marquis de Sade's classic work of sadistic sleaze and updates it to WWII Europe, hoping to mirror the excesses of the Marquis to the sexual escapades of a sick band of wealthy nihilists. For the most part, it works, paralleling brutal images of rape, coprophagia and torture to the oppression caused by a fascist society.

Opening with black and white title cards and one-of-a-kind bibliographic citations, Salo initially seems like a stuffy, pensive Euro-art flick. However, this feeling fades fast, as it turns into an endless barrage of sexual perversion and squirm-inducing torture within its first twenty minutes.

The story basically revolves around four "libertines" (a duke, bishop, magistrate, and president) who've realized that their time as social and political leaders in Italy is coming to a close. As a last hurrah, they've devised a plan to kidnap local teens, integrate them into their masquerade of perversion, and brutally murder them for pleasure.

After intercepting boys and girls from the countryside (even going to the lengths of trading their daughters to each other for marriage), the libertines pick their prey based on physical perfection and prepare them for their final days. As the teens stand naked in front of their captors, they are told of their roles as possessions and their inevitable demise. 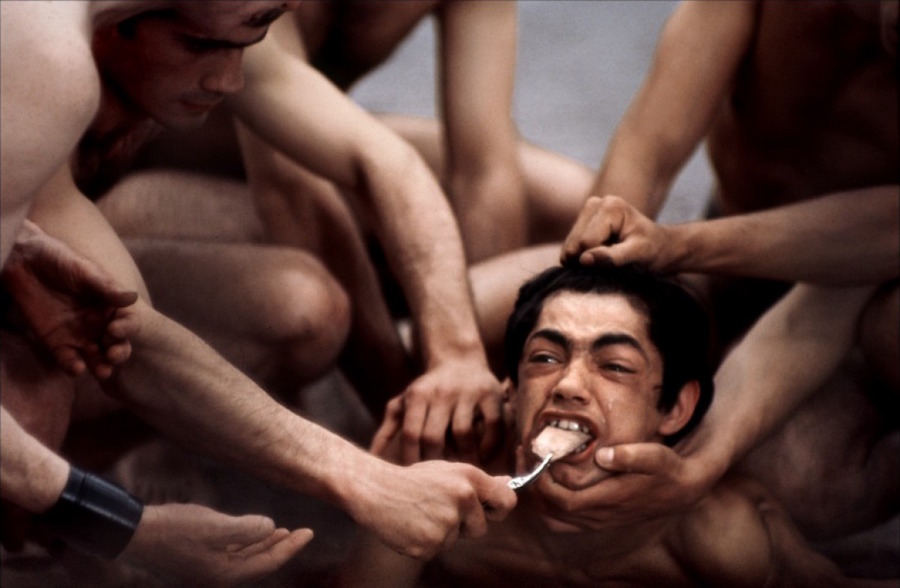 The actors portraying the practically nameless subjects of torture (I believe several boys are called Carlo, whether that's their name or not) act with a guilelessness that benefits the feature, making the endless abuse even more depressing due to their realistic portrayal.

Their torture runs the gamut from sodomy and garden-variety rape to forced consumption of contaminated food and shit, symbolizing the overbearing consumerism of modern society and the willingness of the old and rich to control the freedom and innocence of youth. There is no moment more indicative of this fact than during the final act of degradation. As the teens are begging for their lives, their genitals are burned with candles and tongues cut out with knives. They have been robbed of their collective voice and ability to create.

Even if this flick lacks the campy attitude and leisurely pacing of its Nazisploitation brethren, its naturalistic acting and brave social stance are thought-provoking and shamelessly transgressive.

The final feature in the catalog of Marxist poet and cinema realist, Pier Paolo Pasolini, this aggressively explicit flick caused a firestorm of controversy upon its initial release, resulting in worldwide bans and even a confiscation of prints in West Germany. Its scarcity today is equal in its fervor. Fans and collectors alike are willing to shell out upwards of $1,000 for the out-of-print Criterion Collection DVD and internet bootlegs are rampant. However, fans and collectors now have reason to rejoice; Criterion officially released a 2-disc special edition in August of 2008. Highly Recommended!