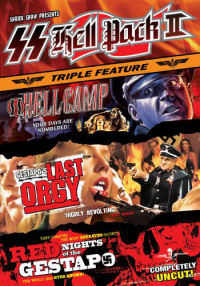 Meet the diabolical Dr. Krast, a sadistic female Nazi scientist who makes ILSA THE SHE WOLF look like DR. QUINN, MEDICINE WOMAN! She creates a barbaric, sex-crazed Neanderthal beast that feeds upon the beautiful women tossed into its cage! The demented diva doctor will stop at nothing to further her series of shocking and depraved experiments on human guinea pigs. Can the partisan forces fight the Nazis, liberate the prison camp and put an end to the doctor’s scientific atrocities in time to save the beast’s next human meal?

Under the iron-fisted rule of Commandant Starker is a special prison camp for women frequented by pleasure-seeking Nazis on leave. Disenchanted with the usual Nazi decadence, the Commandant develops a fatal attraction to a beautiful prisoner, Lise, who seems undeterred by the nastiness that surrounds her. It becomes his goal to break her will by subjecting her to some of the most unspeakable tortures and atrocities ever witnessed, including a banquet scene your mind won't easily erase. Years later, Lise lures theCommandant back to the scene of the hate-crimes for some serious closure. One of the sickest entries of the Naziploitation genre, GESTAPO'S LAST ORGY takes a rather artistic approach to its utterly repellant subject matter.

The Red Nights of the Gestapo