Enzo G. Castellari was of course not the only Italian film-maker dabbling in 80s trash fare. For example, Sergio Martino made 2019: After The Fall of New York, Giuliano Carnimeo made Exterminators of the Year 3000, Lucio Fulci made New Gladiators, and Giuseppe Vari as late as 1987 made Urban Warriors. Castellari's unique style, his charming personality, Spaghetti Westerns of repute and his ongoing enthusiasm for cinema, make it all the more interesting to look at three of his 80s works that have achieved cult status, despite their trashiness. We'll be looking at his two Bronx Warriors movies and the post-apocalyptic camp classic The New Barbarians. Enjoy this short trip through these three releases, which have gotten top notch BluRay treatment. 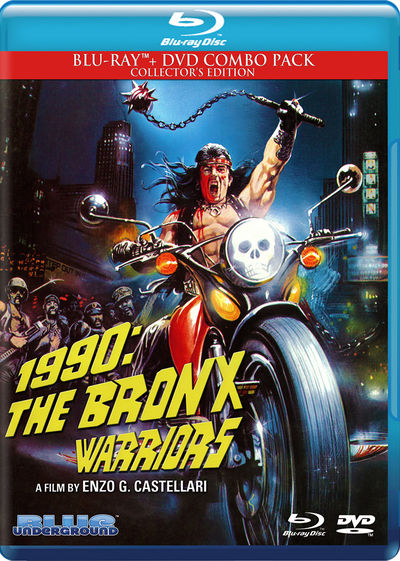 1990: Bronx Warriors is Castellari’s foray into urban gang warfare territory. There is some homage to The Warriors and Escape From New York in there, but for the most part this is pure 80s camp. The Hammer (Vic Morrow) is a government agent sent into the Bronx, in the distant future of 1990, a no-man’s land ruled by gangs, to retrieve Ann (Stefania Goodwin), a millionaire heiress who fled Manhattan to seek refuge from the corporations. She falls in love with Trash (Mark Gregory), leader of the Riders, who battles rival gangs for dominance and justice in the Bronx. To secure their future, Trash teams up with The Ogre (Fred Williamson), the self-declared king of the Bronx, to take down Golan (George Eastman) who leads a rival gang, and is the kidnapper of Ann. There was a secret deal made with rogue members of the Riders who want to sell the girl to Hammer, who sends in riot police to capture the girl. A battle ensues……

Enzo G. Castellari has made a name for himself directing mostly great spaghetti westerns, some Italian crime flicks and the legendary Inglorious Bastards. Just like the Italian film industry went belly up after the 70s, so did his career. He made a few attempts to harken back to the golden days, and among other things made a fairly well-received pseudo-western with Franco Nero. His 80s efforts are series of pseudo-scifi campers that include Bronx Warriors, Escape from the Bronx (a sequel), and the post-apocalyptic flick The New Barbarians. He stars in Bronx Warriors as the vice-president, but he gives off little more than a few lines.Vic Morrow is an interesting choice, he made tons of movies as an actor, but he also wrote and directed the James Garner western A Man Called Sledge, which was recently released on BluRay. George Eastman as Golan is mostly ridiculous, and Fred Williamson as Ogre was also mostly a cliche effort. There are hilarious costumes, bad acting, roller-skates, cheap-looking stunts and dialogue so bad it’s no wonder Mystery Science Theater jumped on the sequel. It’s entertaining though, no doubt. Once you accept the 80s campiness, you’re entering an amazing little world of Bronx Warriors, leather clad cops and evil corporations. I am looking forward to the sequel.

The BluRay for the most part offers an amazing transfer and great sounding audio track in DTS HD mono. There are English, Spanish or French subtitles to go along with that. They must have unearthed a really well preserved master to produce this BluRay, as the colors are really vibrant, print damage is almost nonexistent, and contrast is really good. There is some edge enhancement visible, but only to a minor degree. Film grain is very visible but adds a nice character to it. Overall a great looking and sounding BluRay.

It includes the first of three parts of a conversation between Enzo Castellari and the producer Fabrizio de Angelis. One of the interesting things they point out is, that to this date no-one seems to know what ever happened with Mark Gregory. The other clip is of Enzo visiting the Italian weapons rental company of Paolo Ricci in Italy whom he has worked with on several of his movies, all kinds of props and special effects. Then there is an interview with stuntman/actor Massimo Vanni, who takes some credit for discovering Mark Gregory, plus some trailers and picture/poster galleries. The main extra however is the audio commentary with Enzo G. Castellari himself and his son Andrea, moderated by David Gregory. The commentary is extremely informative and pretty entertaining, there is no other way to involve yourself really deeply in the making of this movie.

Escape from the Bronx 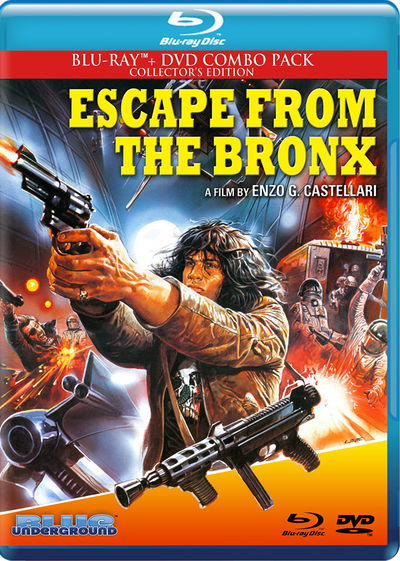 Escape from the Bronx is the second in Castellari’s trashy 80s urban warfare series. This time, the government has decided to evacuate the Bronx and clear it out mercilessly once and for all, because it was unable to pacify it. An urban battle ensues, at the forefront is Trash (Mark Gregory) who is facing off with government forces. The man in charge of flattening the Bronx, removing its inhabitants and turning it into a shopping mall is getting in Floyd Wrangler (Henry Silva), his man on the ground. Trash meanwhile mourns the dead and fights his rivals and the demolition squads at the same time. Meanwhile, a courageous journalist infiltrates the Bronx to document the injustice ahead of a UN human rights council investigation of the city’s practice in cleaning the neighborhood out. The raging guerrilla war escalates, so Trash and the Journalist try to convince the super soldier Strike (Giancarlo Perle) to kidnap the boss of the evil corporation….

Music by Franceso de Masi and an even higher budget than the first time around cannot disguise the campness of this. The costumes are still hilarious, the stunts over the top and the script ludicrous. Castellari himself is back again, this time with an amazing moustache. Also joining him is the great Henry Silva (known from various poliziotteschi films). The film is a logical sequel to the first, and boasts mostly battle sequences, hilarious stunts and chases. The story is thin, there is not much (good) acting and aside from gimmicks, there is not much quality in the directing.

The BluRay looks just as great as the other one. I feel there is a bit more print damage visible in some parts, and edge enhancement kicks in with some less crips scenes, but overall it does look amazing. The sound once more in DTS HD and the same subtitles options are available.

The extras include the third part (the movie was made a bit later) of the conversation between Enzo and Fabrizio, which goes a bit more into the actual making of this sequel, which is more action-oriented than the first one. Then there is an interview with self-declared Bronx Warriors “superfan” Lance Manley, the guy out looking for Mark Gregory, and again some trailers and picture/poster galleries. For the audio commentary we are back with Enzo G. Castellari, his son Andrea and David Gregory the moderator. 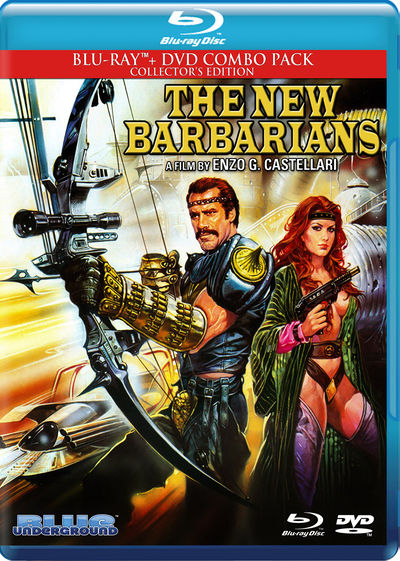 The New Barbarians is Castellari’s attempt at a post-apocalyptic take on the success of Mad Max. After the nuclear holocaust, the survivors battle each other. The templars are a gang of terrorising militia killing nomads. They go after Scorpion, a loner who isn’t exactly a superhero, but prefers saving people to murdering them. While a rift within the templar gang becomes clear, another protagonist shows up (Williamson). Some of the templars hunt Scorpion, but X comes to his side. together they take down the templars, picking up an injured woman on their way and protecting a settlement of refugees….

The music by Claudio Simonetti (Dario Argento's Opera) supports this incredibly campy Castellarian take on the Mad Max universe. Giancarlo Perle is back as Scorpion this time, a poor-man's Rockatansky. The all-over-the-place script involves a rescued damsel in distress, a camp of survivors, a bad sect of thugs wanting to rebuild an unusual future, a deadly kid, and lots of funny looking cars and motorcycles. Castellari and his crew go all out in effects and original ideas, doing their best to hide the low budget nature of the film, which more than the other two looks like it was shot in someone's back yard with supplies from the attic. One cannot but love this movie for its sincerity and honest attempts. The cast mostly takes the effort seriously and plays along in what never ever could have been dangerous to Mad Max. Now, I don't want to sound too harsh. It's a fun little 80s video flick and it's hilarious, it's well-made (from a craftsmanship standpoint), but it will probably always be remembered for its campy looks, props and everything else.

The BluRay looks very neat. There’s lots of film grain, that actually helps the movie since it looks a lot more low budget than the other three. For the most part therefore a quite amazing transfer with the same to be said about the audio. The subtitle options are the same.

The extras include the 2nd part of the Castellari / de Angelis conversation, going mostly into the inventiveness and the people involved in a movie that has even lower budget than others and came out in a very competitive time. The second extra here is a 20min interview with Fred Williamson, how he broke into the industry, to Inglorious Bastards with Enzo, and Take a Hard Ride that he did with Margheriti, and then the Bronx and Barbarians flicks, to which Williamson didn’t add too much (screen time wise), but probably added crucial commercial properties that contributed to their success. Williamson is a knowledgeable, charming guy, so this is pretty neat to watch. Then there are trailers and pictures, but for the third time we’re back with Enzo, Andrea and David for the audio commentary. They dive deep into the making of the movie and the people involved, it’s again a very entertaining and informative bit.

The Italian filmmakers most movie buffs are familiar with from their Spaghetti Westerns, poliziotteschi or gialli masterpieces, have each on their own revolutionized cinema and contributed in large parts to Italy's ascent in the world of movies, until it fell apart when the 70s came to a close. From a critical perspective, most of these filmmakers probably never really managed to make the transition into the world of new technologies and video. For some reason, the inventiveness and low budget mastery that propelled them to international fame in the 60s, were their death in the 80s, when so much more was suddenly required of films in order for them not looking cheap. Italy lay in financial ruins by then, and the movies became smaller, cheaper, quicker and more international. Whereas even the low budget movies of the 60s looked epic and artsy (well not all of them), the more time passed, the more they revealed their budget looks.