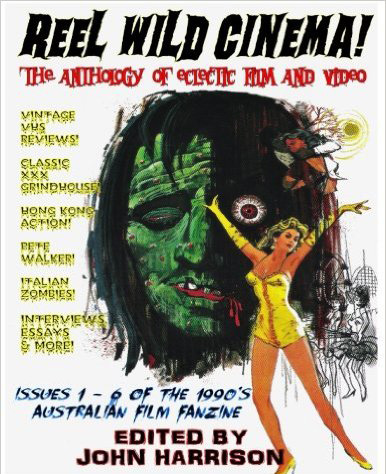 A compendium of issues 1 - 6 of REEL WILD CINEMA!, the 1990's Australian fanzine devoted to off-beat, cult and exploitation films of all kind, and from all eras, with a particular emphasis on covering genre films which had been released on home video in that country during the previous 15 years. REEL WILD CINEMA! was an A4 photocopied fanzine published by John Harrison out of the outer Melbourne suburban wasteland of Berwick, with six issues appearing between 1997 - 1999. Devoted to all manner of cult and eclectic/off-beat films, REEL WILD CINEMA! rode the tail of the classic wave of cut & paste film fanzines of the 1980s and 90s, before the internet exploded and changed the landscape of fan publishing forever. Reprinted in it's Original Old School Format! ADULT READING!!