The first film to be based on the author’s bestselling ‘Books Of Blood’ collection of short stories, it’s no secret that Clive Barker hated the film version of ‘Rawhead Rex’ despite penning the script himself. In fact for a long while you couldn’t find anyone who had anything very positive to say about this particular mid-80’s monster mash. I however have something of a soft spot for both the movie and the monster. As soon as I first laid eyes on Rawhead’s fang filled physog glaring malevolently from the cover of issue 61 of Fangoria magazine I was desperate to rent the VHS tape and get to know the Pre-Christian predator better. I don’t think I read Barker’s short story until sometime after seeing the film so maybe I avoided the prevalent ‘not as good as the book’ cynicism that plagues so many page to screen translations. Or maybe it was just the fact that for as long as I can remember I have been absolutely crazy about movie monsters no matter how rubbery or boss-eyed. And Rawhead Rex is indeed both. 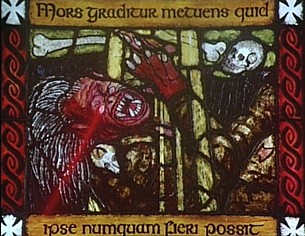 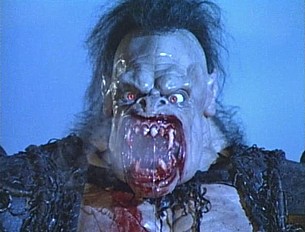 The film opens with a scene reminiscent of the 1971 British horror flick 'The Blood on Satan’s Claw' as a farmer struggles to remove a tall, roughly carved stone from the middle of a field. Suddenly struck by lightning the monolith topples over to reveal an enormous figure buried beneath. Nine feet tall, clad in leather rags, sporting more knashers than Bruce the shark and the kind of mullet usually only seen on professional wrestlers, Rawhead Rex pops out of the hole he’s been stuck in for centuries as if he’d just been taking an afternoon nap. A quick stretch and a roar and he’s off to rip a few local yokels in two starting with the joker who tipped his tombstone. And do you wanna know what it is that makes Rawhead a truly awesome movie monster? He has flaming eyeballs! As he glares out at the audience we see the very fires of hell dancing round his pupils. How cool is that? Not even Gene Simmons can beat that shit. 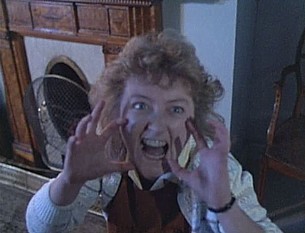 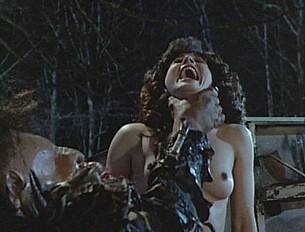 Unfortunately before we get to see Rawhead eat some people we must become acquainted with American author and historian Howard Hallenbeck who has dragged his wife and two kids to Ireland while he conducts research into sacred sites for a new book. One evening while taking a stroll alone, Howard spies Rawhead Rex atop a hill holding a severed head in his hand. The astonishing sight causes Howard to dramatically drop his cigarette. Despite a string of violent bloody killings in the area Hallenbeck fails to convince the local constabulary that there’s a nine foot tall, mullet-monster on the loose. The next morning the family pack their car to leave but don’t get far before their young daughter Minty needs to pee and while mum and dad are chaperoning the little girl behind a convenient bush Rawhead ducks through the passenger side door of the car and scoffs their son Robbie. Now Howard has a personal score to settle with the bloodthirsty brute. 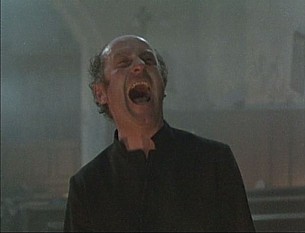 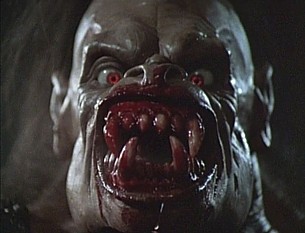 Meanwhile Rawhead sets about re-establishing dominion over all he surveys by hypnotising the parish vesper and ordering him to desecrate the local church. In what is both the film’s most sacrilegious and bizarrely homo-erotic scene the monster rendezvous with the vesper in the darkened cemetery and proceeds to baptise his kneeling disciple by pissing in his face. Witnessing this shocking spectacle the vicar runs for cover only to be chased by Rex who mincingly trots between the headstones in the most exaggerated camp fashion imaginable! Quicker than you can say ‘It’s a bloody massacre’ in a comical Irish accent the town’s folk have a bloody massacre on their hands complete with exploding police cars, overturned caravans, a de-capitated farmer and an eviscerated vicar. 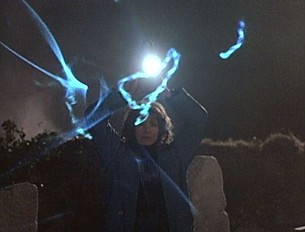 Although the leads handle their roles well the acting isn’t all that great and the special effects, especially during the wacky psychedelic climax, aren’t all that special either. Ultimately it’s the frequently awkward and unnatural dialogue though that is the worst offender and the blame for this can only lie with Clive Barker himself. However despite its un-engaging characters and lacklustre dialogue Barker’s script follows his original short story closely and is filled with the same provocative thematic concerns that reoccur throughout the author’s rich and varied cinematic and literary work; in particular the mixture of sexual taboo and religious iconography and a Lovecraft-like fascination with gods and monsters that frequently involves the two being personified in a single body. 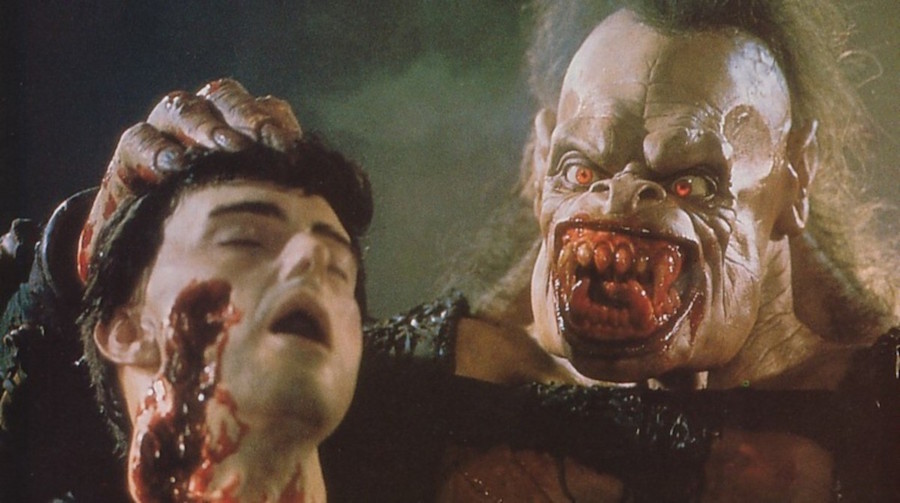 In one scene a female victim gratuitously loses her clothes before Rawhead smashes her against a tree trunk however at the film’s climax it requires a woman’s touch to defeat the creature as Mother Earth channels some vaporous electro-druid fertility shit through the movie’s, up to now completely superfluous and mildly irritating, female lead. Actually I’m not really sure what happens at the end but it sure looks pretty and the resulting cosmic smack-down leaves Rawhead with a sorehead. As was obligatory for all 1980s horror movies the film concludes with a nonsensical coda that leaves things open for a sequel but unfortunately for fans like myself further Pagan pissing adventures were not forthcoming.