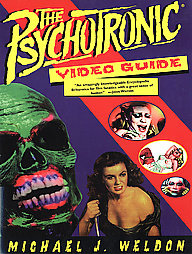 How to know a Psychotronic Movie:

These films can commonly be identified by their use of exploitation elements and their interest in humanity's lower common demoninators.

They occur throughout the world, but are particuarly common at midnight movie festivals and in video stores' cult sections, they are especially frequent at that beloved and dying institution, the drive-in.

Their packaging is commonly deceptive. They almost always appear on videocassette.

And they're all here in the Psychotronic Video Guide.

From Abby to Zontar, this book covers more than nine thousand amazing movies from the turn of the century right up to today's golden age of video, all described with Michael Weldon's dry wit. More than 450 rare and wonderful illustrations round out the book, making it a treasure trove of cinematic lore and essential for every fan of filmdom's finest offerings. (Amazon)