Psyched by the 4D Witch/Review

< Psyched by the 4D Witch

Review of Psyched by the 4-D Witch

Many films have been called mind-benders, got ready for one that can live up to that title in both the right and wrong ways.

Victor Luminera is already a legend in the Grindhouse world for this film, but sadly hardly anyone knows about him or even if it's an alias for someone else that's had some history in Exploitation. Imagine someone putting Softcore, the Occult, bad imitations of Kenneth Anger's films from the 50's and 60's, some cheesy gimmick, tons of over-lapping images, heavy use of 60's light show special effects, and a very low budget together into an example of just how anyone with a camera was desperate to get a film onto the screens back in the Early 70's. For those willing to explore the warped side of Early 70's Sin-ema, this will be something to look for as either a warped 70's Erotic Psych Out or just something to put on as a background at a party - Either way it's bound to generate interest. 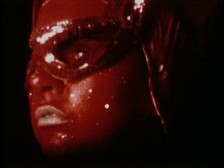 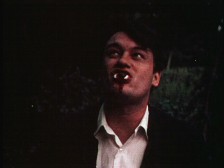 Welcome to the Early 70's, with the mix of Psychedelia and Satanism still a good trend for Adult films, and blue eyeshadow and very thick blond hair was a common look which is an introduction to our lost College Chick Cindy played by Margo...that's right only one name needed here. Practicing witchcraft in a room filled with occult books and posters, which in this film is usually just waving a couple of candles around, she has promised her father to stay a virgin and actually lives up to that. Despite the very illogical plot line, as being in College and into the Occult usually means a life that's at least with some wild nights out, it does serve as a perfect excuse to play stupid for the camera and to lead the plot into Sexploitation. Abigail, the 4D Witch played by Esoterica (The other One Name Wonder here) possesses Cindy and gives her the power to have super orgasms and Astral Travel while tempting her with some lesbian action along the way. After getting experienced, Cindy teases the new gay neighbor Mr. Jones (Kelly Guthrie, who has been in some of Ray Dennis Steckler's Adult films like Sexorcist Devil) into being straight.

Later, in The Astral World of Abigail's tests, her best friend Jan gets possessed to perform a ceremony by drinking a chalice filled with spider venom and human blood and performing with a (rubber) snake that's been said to have come from her rectum, Cindy getting into the action after that. Later on, Jan is injured after the ceremony and things get too weird for Cindy while finding out that Abigail's possession is revenge for stealing her lover in Colonial Times...classic "Let's make this up" plot development. After calling the Abigail a "Witch Bitch," Cindy loses her powers and through prayer, saves Jan from death. Through the second part of the film, things center on Cindy's brother Mark, a student of Parapsychology, and his transformation into being a King of the Sex Vampires with what's clearly one of the worst set of fake fangs in the history of film and as one can tell, things move from one warped moment to another until the messed-up ending. 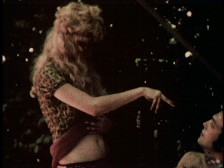 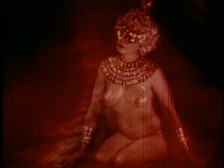 The music used in this film has already been well noted by many, being a mixture of Classical records ranging from "Bolero," "Night on Bald Mountain," Wagner's "Tristan and Isolde," and Pink Floyd's "A Saucerful of Secrets" (Used in a time before they found major success in The States), all used very well withing the ultra low budget sexcapades, but the original theme song by Johnny On the Spot really stands out in it's 70's Fuzz Tone Guitar glory. If Carolyn Brandt would have appeared in this, one could swear that Ray Dennis Steckler might have had something to do with this, as some of the scenes bear a slight resemblance to the more warped moments of his Incredibly Strange Creatures classic, but for now we may never know just who was behind this unique moment in Exploitation.

Psyched by the 4D Witch is clearly one of the odd ones to catch; Psychedelic, unique, stupid, interesting, questionably erotic (That's if you like that Early 70's California look), and very low budget all at the same time with the occasional moment of inspired imagery. The MOS film making (Shot without sound, the voices all overdubbed onto the film) really adds to the style, while the sights of various paperback books and a slight glimpse of Anton LaVey on a cover of Look (A couple of years before The Devil's Rain) all prove that the film makers knew what they were aiming for in their bid for fame, and the cut and paste editing is one of the most noticeable in Exploitation film history and a suggestion that maybe there were plans for a full X-Rated version. This is clearly something to check out at least once as an example of the use of The Occult in Sexploitation during the Early 70's at it's lowest budgeted and most unique.