Post-Apocalyptic films are a sub-genre of science-fiction cinema. These films take place in our world after something terrible has happened such as a nuclear war or a biological plague has wiped out most of the human race.

The main characters are usually survivors who must live with a lack of technology and/or societal norms. They range from big budget movies such as Planet Of The Apes (1968) where, following a catastrophic war, Apes become the dominant species on Earth, to low-budget productions such as the Mad Max series that deal with a police officer turned nomad following a mass energy shortage/nuclear war fallout.

On this page you'll find 10 handpicked exploitation and cult classics that we feel will be a great starting point for anyone that is new to them. Dr. Robert Morgan (Vincent Price) is the only man who survives a global epidemic that kills most of the world's population. He then has to kill bands of zombie like vampires, find food, fix his house and do anything to stay alive. The film slowly reveals his past by showing him crying whenever he sees his daughter's doll. We learn Robert used to live with his wife and his daughter and everything was fine. Unfortunately, he read the news that there was a plague that killed lots of people in Europe, so he and his friend had to work in a laboratory to find a cure to the disease. To make things worse, the plague slowly killed citizens in his own town, including his daughter and wife. This film was remade twice as The Omega Man (must see) and I Am Legend starring Will Smith. 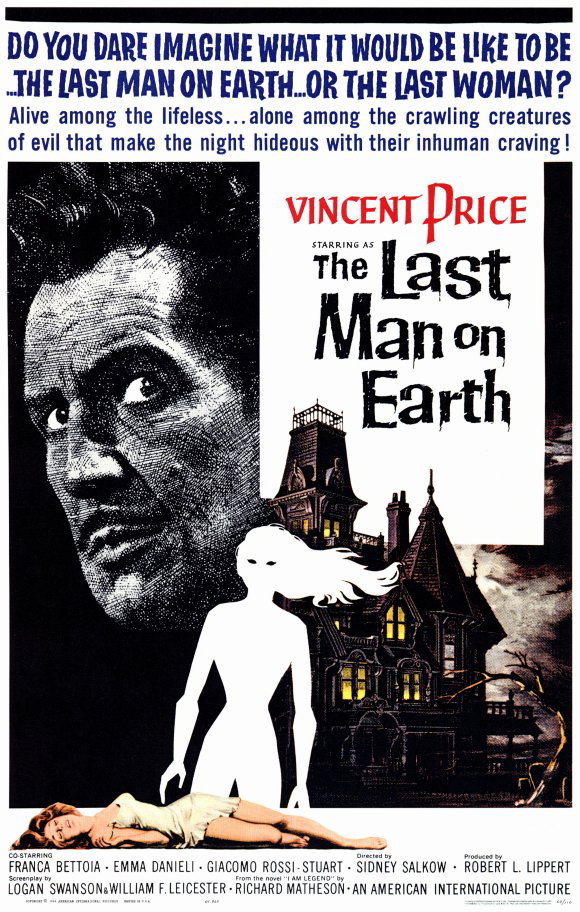 A British-American post-apocalyptic science fiction film directed by Cornel Wilde (The Naked Prey) and starring Nigel Davenport, Jean Wallace and John Hamill. It is an adaptation of the novel "The Death of Grass" by John Christopher. The film focuses on the survivors of a deadly plague that has hit London in the not too distant future. When London is overwhelmed by food riots caused by a global famine, a man tries to lead his family to safety in Scotland. (Wikipedia) 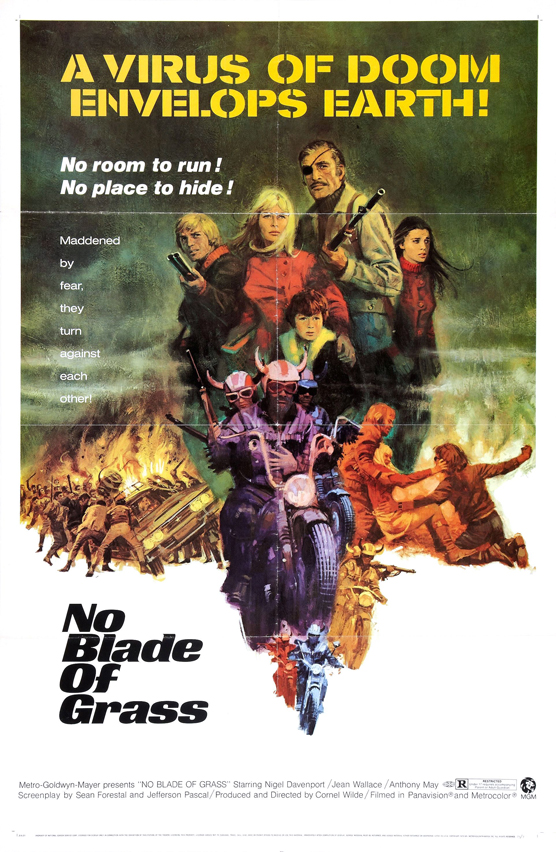 Roger Corman's Gas-s-s-s is a truly bizarre, but entertaining, view of a post 60's counter-culture dystopia. Where as Wild in the Streets had adults being overruled by the youngsters, here they're just simply gone. When a chemical gas, accidentally released by the right wing powers, kills anyone over 25 years old, Coel (Bob Corff), some sort of a free-minded young priest, runs off with his girlfriend, Cilla (Elaine Giftos) to the southwest. Coel & Cilla then hook up with music junkie Marissa (Cindy Williams), her boyfriend Carlos (Ben Vereen) along with horny Hooper (Bud Cort) and his girlfriend Coralee (an almost unrecognizable Talia Shire). A clique is formed and the gang sets out to find the ultimate peaceful settlement where this new era of mankind will begin. 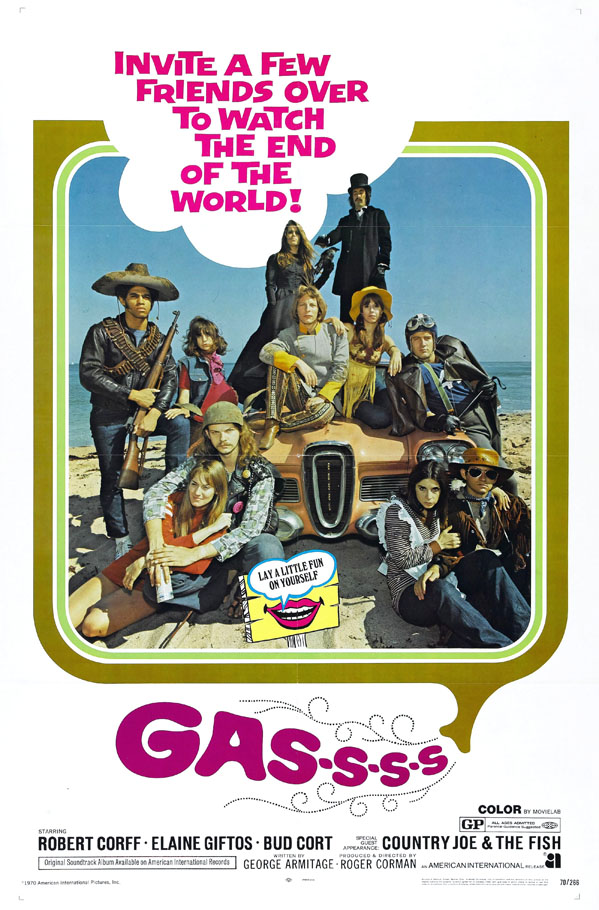 In the year 2293, Earth's civilians are divided into two groups. First is the "Brutals", they are ordinary people who wear black suits and are into breeding. The second group is the "Exterminators". They are a group of people in red suits that worship a fake god called Zardoz. In the beginning of this film, Zardoz gives a memorable speech that later becomes a slogan for 21st century people: "The gun is good, the penis is evil". Later, one of the Exterminators called "Zed" decides to sneak inside the Zardoz and kill Arthur Frayn, the one who controls it. This is the beginning of Zed's journey through the small village of people....and death. 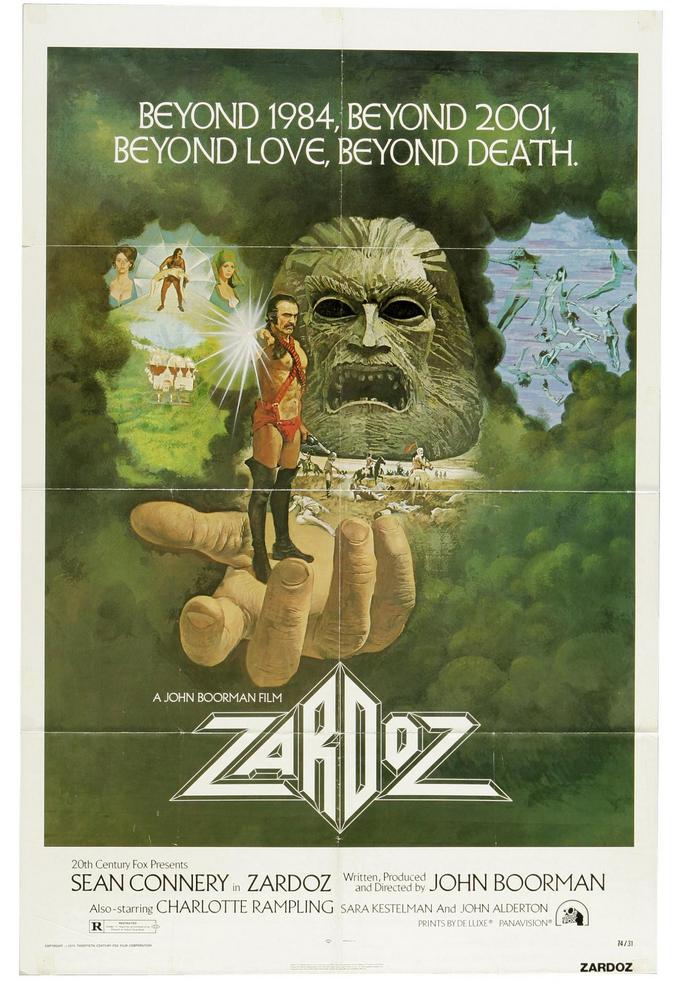 Set in 2024 A.D.", we follow the journey of a boy named Vic (played by the great Don Johnson) and his dog "Blood" (voiced by Tim McIntire). Blood isn't an ordinary dog, he's telepathic and has the ability to "talk" with Vic. Their life is simple. They drift through a desert dystopia while Vic searches for food for Blood in exchange for Blood's power to find him women. Every day is the same until they meet Quilla, a beautiful woman who "lures" Vic into the Down-Under, an underground society that eagerly needs someone outside to donate sperm so every woman in the town can have babies. Unfortunately, Vic doesn't listen to Blood's warning and decides to go down there. This leads to a weird adventure. 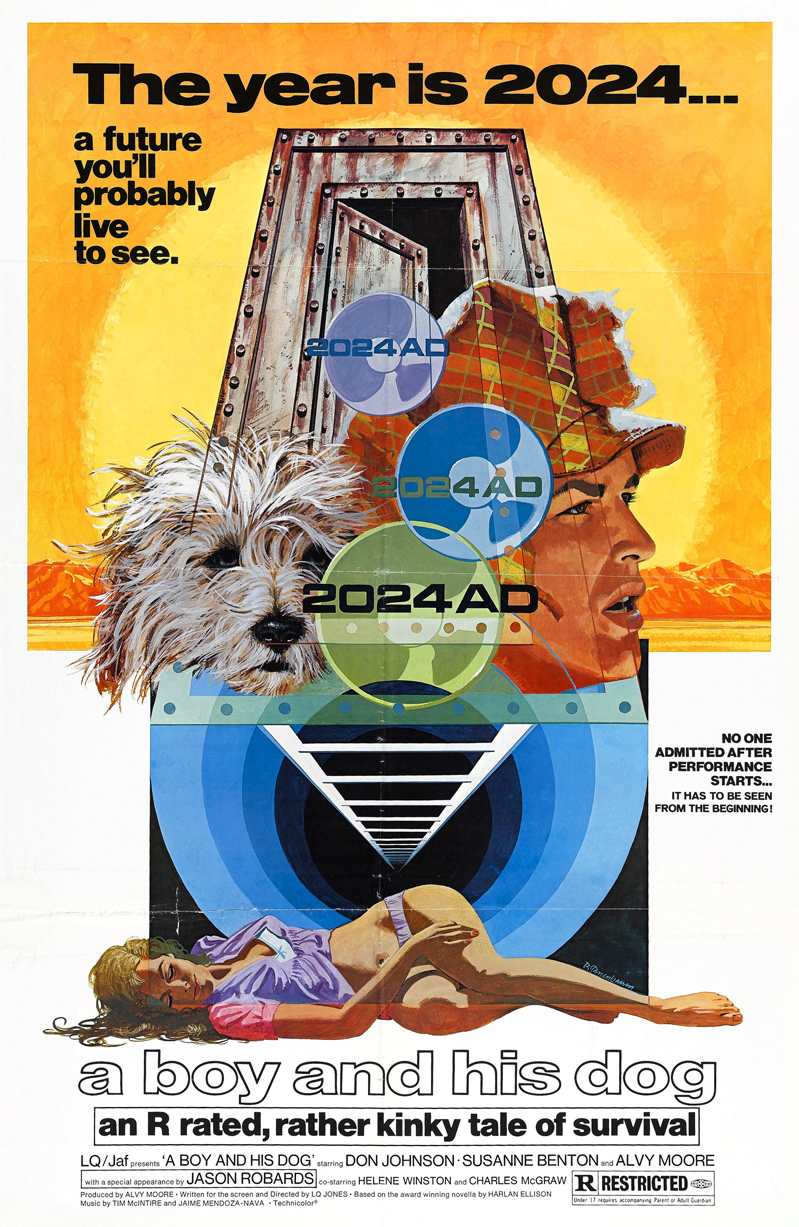 Set in post-civilization New York City 2012, this film depicts the struggles of a small enclave of inhabitants attempting to survive in a compound beset with packs of starving pillagers. Following a global pandemic which devastates the population, Baron (Sydow), the leader of a tribe of survivors, has established a small fortified area in the ruins of New York City. Cal (Kelton), a former scientist and a member of Baron’s tribe, has developed plague resistant seeds which allows the tribe to grow vegetables in the barren soil. Their small garden has become an oasis in the ruined city, coveted by the packs of starving, lawless gangs outside. Needing to increase security against the raiders, especially a gang led by Carrot (Smith), Baron recruits a deadly warrior named Carson (Brynner), who has put his skills out for hire. (Wikipedia) 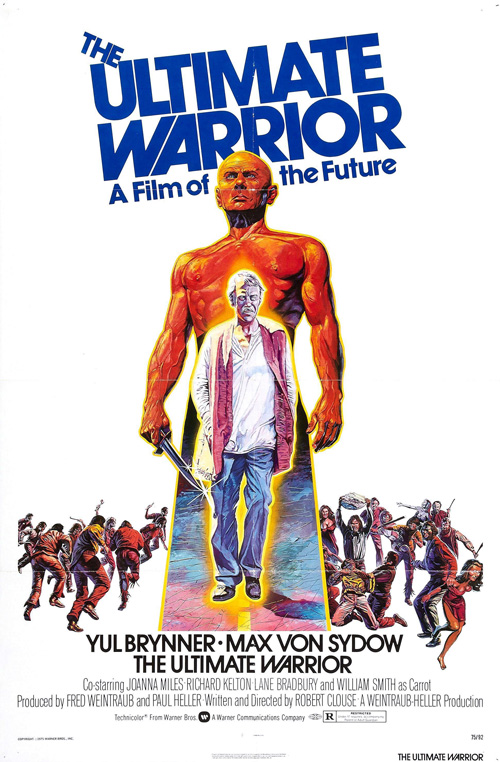 Imagine a world in which laws are meaningless and oil supplies have nearly run out. It would be a hard time to live and survive. George Miller's 1979 Ozploitation cult classic tells the story of a good hearted policeman named Max (Mel Gibson) that seeks revenge on an evil gang that kill his best friend then his wife and baby. Mad Max is considered one of the greatest films in the post-apocalyptic subgenre. It was followed by two direct sequels The Road Warrior, Mad Max Beyond Thunderdome and a modern reboot starring Tom Hardy, Mad Max: Fury Road (all are highly recommended). 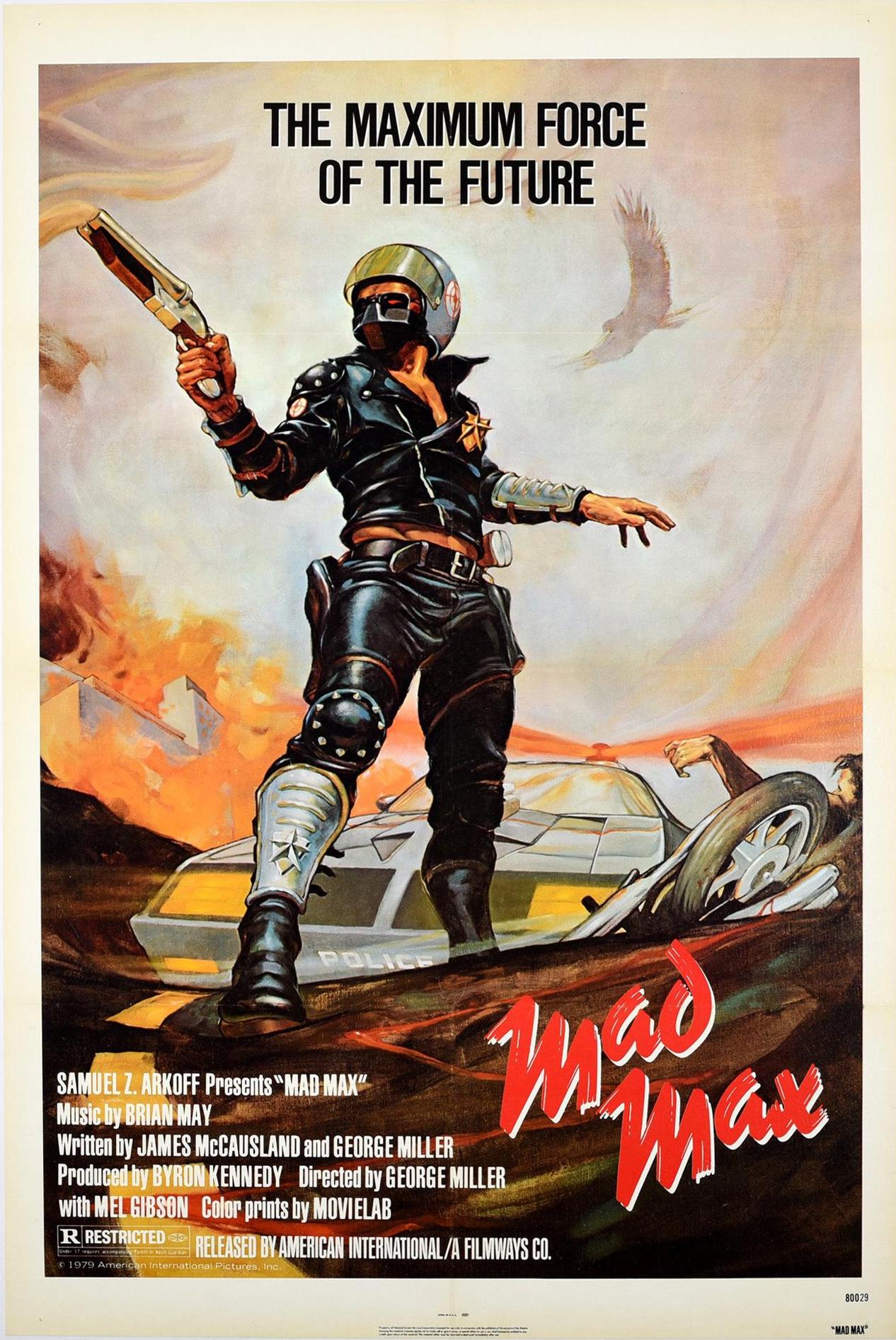 Another rare and mostly unseen example of Joe D'Amato's movies that failed to reach a wider (and much deserved) audience. Starring two legendary grindhouse actors, Al Cliver and George Eastman. Eastman co-wrote and ghost directed the film. In a take-off of Kurosawa’s Seven Samurai, 2020 Texas Gladiators is set in the post-apocalyptic world of Texas. The lone town in the middle of a wasteland hires 7 men to defend it. Joe D'Amato fills the production (filmed in Korea) with many notable actors and actresses of the grindhouse era. On display are Hal Yamanouchi, Donald O’Brien, Daniel Stephen and or course the lovely Sarina Siani. 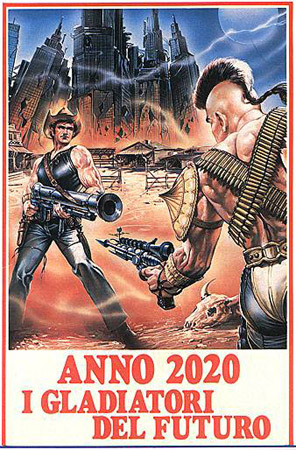 After a nuclear holocaust, there are two groups of survivors. The first are called the "Eurax" who claim that they are the winners of the nuclear war. The group then try to conquer the world and capture people to do experiments on. The other group of survivors are called the "Pan American Confederacy". They are a band of rebels that try to fight the evil Eurax. Our protagonist Parsifal was captured and ordered by Pan-Am to rescue the only fertile woman left on Earth. After the holocaust no babies were born and that led to the end of the human race. So Parsifal has to rescue the woman in Manhattan along with two sidekicks but, of course, it's not that easy. 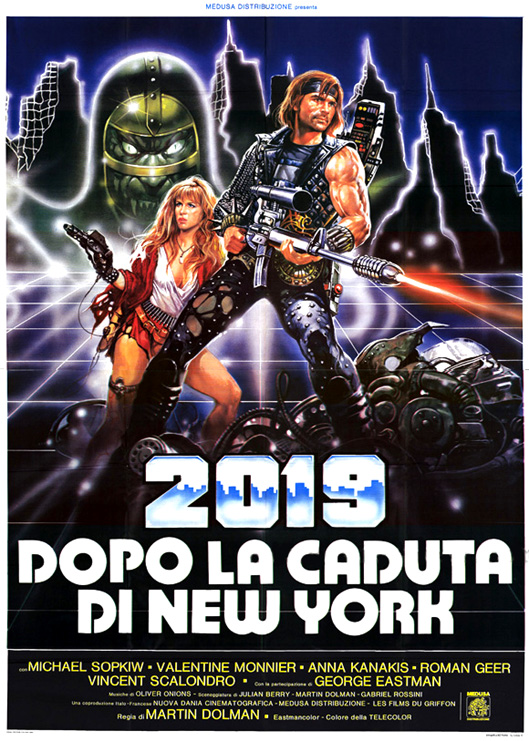 In a NORAD space station a three-person crew is charged with securing North America (USA) with a hefty payload of nuclear warheads. The action starts when their computer monitors come alive with expanding "blips" of doom. Within minutes the Earth as they knew it seems to be over. It appears there has been a Communist attack on North America, but they never received the order to fire. In the process, one of the crew, Howe, discovers a missile headed directly at the satellite and the crew effectively destroys it with their own (sans one missile that failed to launch). Without warning their capsule deploys and they are sent on a descent back to Earth. Throughout the remainder of the film, we meet a host of doomsday themed characters including roving gangs of kids or "terminals" who are poisoned by radiation and have developed a taste for human flesh! 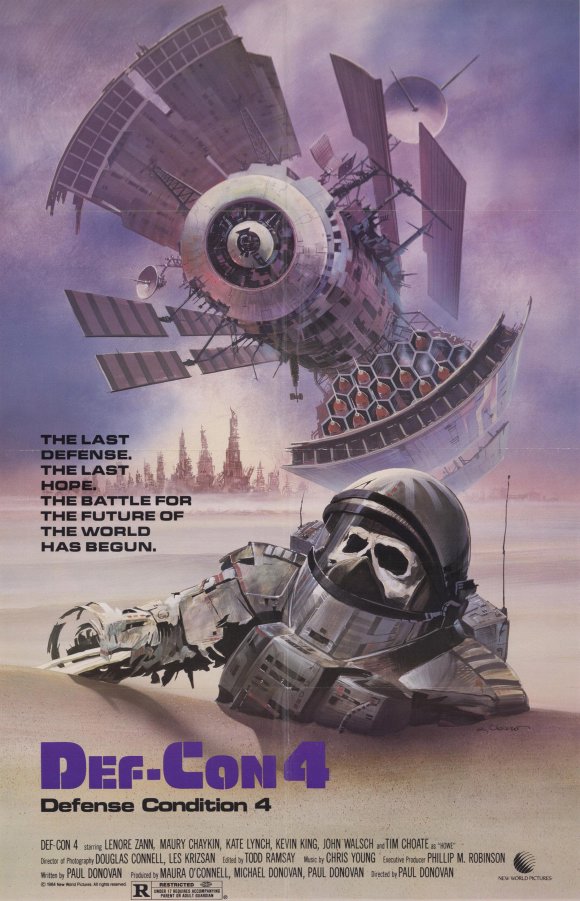