I have this weird obsession with old movie gimmicks. The reason is because they were creative marketing from film's past that we just can't get nowadays either because it seems too ridiculous or is too expensive. The famous person behind the early promotional gimmicks concept was the late producer/director William Castle. In the 1950s and 60s he essentially turned movie theaters into a wild, fun theme parks. His tactics were so hilariously over-the-top and they always attracted lots of kids and young adults. For instance, with The Tingler he secretly installed a shaking seat in random theaters, so when the creature in the film attacked, your seat would shake. Or his infamous film Homicidal (a direct riff on Hitchcock's Psycho) that had a "Fright Break", in which there's a 45 second countdown clock that appeared before the film's climax and warned audiences that if they are too scared they could leave the theater...but it wasn't quite that easy! If you left, you had to stay in a yellow booth called "Coward's Corner" and get made fun by a recording that exclaimed "Watch the chicken! Watch him shiver in Coward's Corner!". Wow, what a gimmick. There's even a film directed by Joe Dante that pays tribute to him called Matinee starring John Goodman. I'll review it soon for our sister site Furious Cinema. 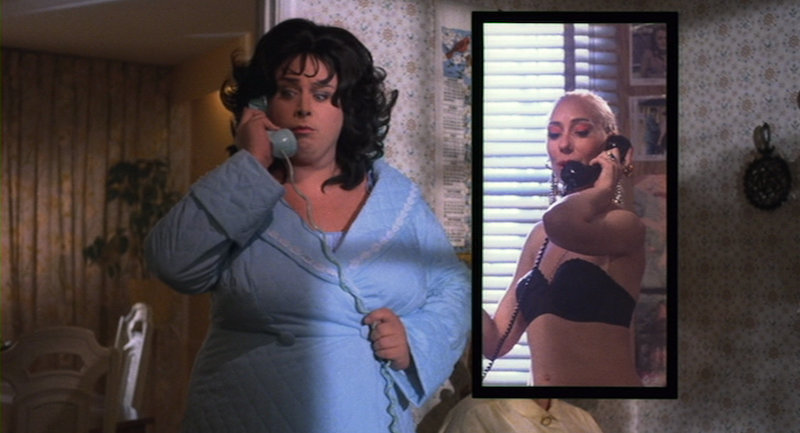 Now, you may be wondering why I had to spend an entire paragraph on William Castle instead of talking about John Waters' Polyester. There are two reasons: this film has an awesome theater gimmick and I have only a little knowledge about John Waters. I know that he directed Pink Flamingos, a cult film that has a scene in which a crossdresser eats a pile of dog crap but that's it. So I naturally expected this film to be totally insane and have shocking scenes. To my surprise, this one is way easier to watch than what I thought. 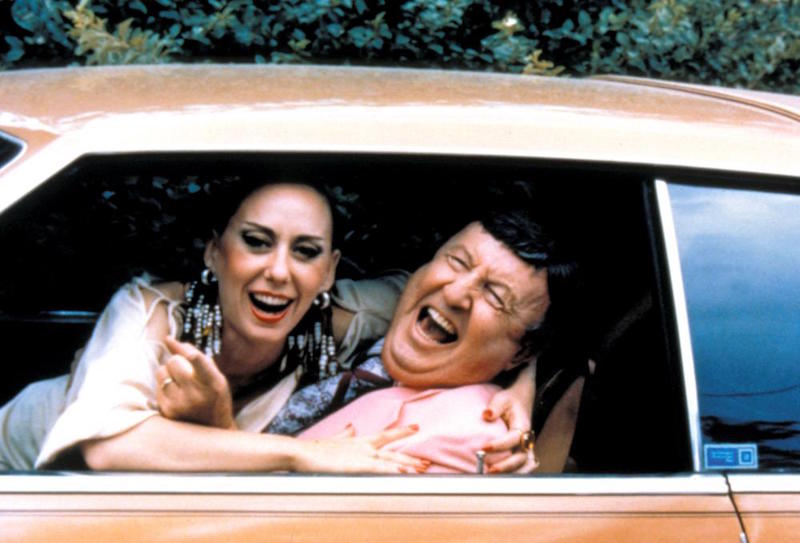 The film is about the life of Francine Fishpaw (Divine). She has a family and lives in a nice suburban home. Unfortunately, her family is a crazy as hell. Her husband is the owner of an X-rated theater and is cheating on her. Her daughter is a nympho. Her son is, well, probably the sickest character in the film. He has a severe foot fetish and attacks any woman who exposes her bare feet. Then, all hell breaks lose. Francine's daughter "accidentally" gets pregnant and she can't go to the abortion clinic thanks to pro-life protesters, while her son commits a series of crimes and later gets caught. Her husband? He leaves Francine and lives with his secretary. Francine's life can't be any more miserable, but luckily there's Cuddles (Edith Massey), her best friend who's always there whenever Francine is depressed. Then Francine meets someone that makes her fall in love again... 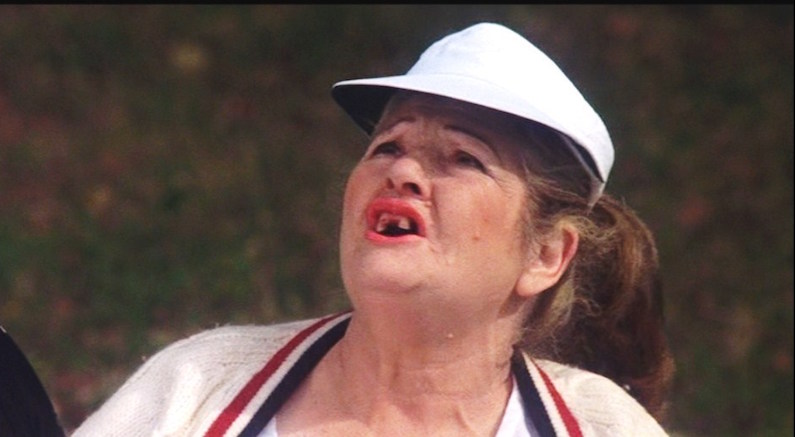 First, I consider Polyester to be a fun parody of soap operas. Although John Waters claims that this was made as a tribute to 50's-60's housewife films and Douglas Sirk style melodramas. So why do I consider it a spoof of soap operas? Well, our main character is a female who has to face miserable events again and again and her husband is cheating on her. Although my knowledge about soap operas comes from shows like Soap or Invitation To Love (a soap opera within brilliant TV series "Twin Peaks"), I still think that Polyester is not that far from what I described. 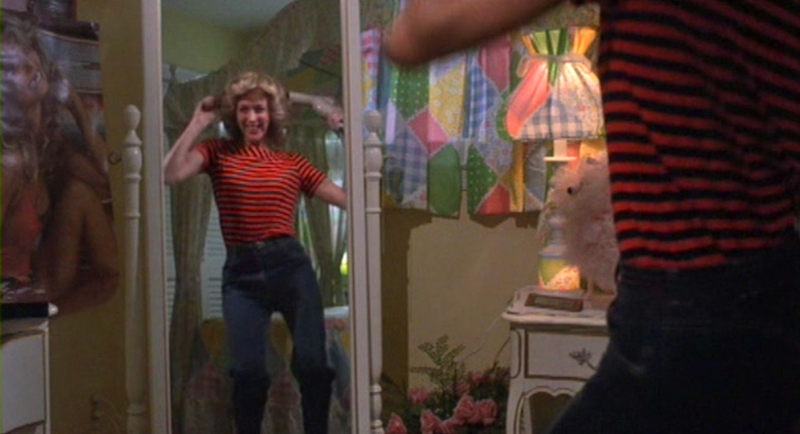 Next, it makes fun of everyone. There are many issues that are being lampooned here. It attacks left and right wing groups at the same time. The film points out flaws about the "nuclear family" myth that right-wingers have pushed for years. Just because straight couples get married doesn't mean that they will live happily ever after. There are internal and external factors that cause problems sooner or later. It mainly depends on personal responsibility and honesty. Next, we have religion. From anti-porn to anti-abortion to the maternity church, it reflects the rise of the Christianity movement during Reagan's presidency. In the film, anti-abortion protesters try to stop Francine's daughter Lulu and say things like: 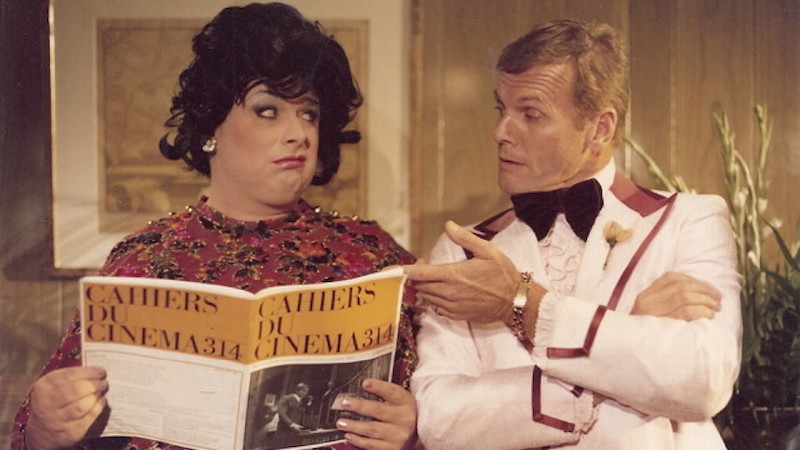 Most importantly, I have to talk about the clever gimmick "Odorama". Odorama is a scratch-and-sniff card that is given to the audience and whenever a flashing number appears on screen they get a whiff of the odor in a certain scene. This is hilariously over-the-top. Not only does Francine give a hint to the audience (even before the flashing number appears) by heavily sniffing so some of the smells are witty (like a fart or a skunk), it also teases the audience about the smell they are about to inhale as well! For instance, there's a scene in which a flower appears onscreen. So naturally we think it's gonna be the smell of flower, but then we see a smelly shoe on screen instead. Or sometimes we don't see what kind of smell that Francine is about to inhale until few seconds later. This helps add more fun to the already twisted black comedic tone of the film.

Whether you have an Odorama card while watching it or not, Polyester will be a unique experience for you. You can enjoy it both on face value or on an intellectual level. Highly recommended.