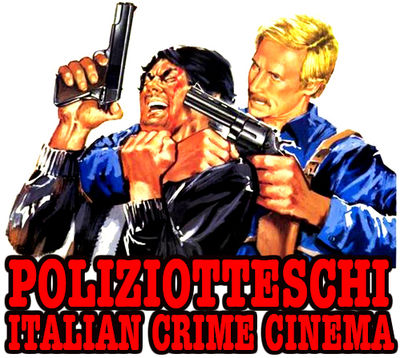 Poliziotteschi is the Italian subgenre of crime/action cinema that became popular in the late 1960s through to the early 1980s. The term "poliziotteschi" is derived from "polizia" the Italian word for police and "esco" i.e. "esque" in American language. They are also commonly referred to as Italo-Crime and Euro-Crime films. The word "Poliziottesco" in particular represents specifically the 1970s crime/police actioners. Regular components featured in these films included: over the top violence, car/motorcycle chases, kidnappings, heists, shootouts. The subgenre's plots and stories usually involved police procedurals and mafia wars, as well as political corruption within Italy's big cities like Naples, Milan, Torino and Rome. These crime genre films filled the void left following the decline of the Spaghetti Westerns of the 60s. They were largely influenced by popular Hollywood crime movies of the day such as Bullitt, Dirty Harry, The French Connection, Serpico and The Godfather.

Just as American police films, American crime thrillers, and American vigilante films of the time focused on the crime waves and urban decline in the United States of the 1960s and 1970s, poliziotteschi were set in the context of, or directly addressed, the sociopolitical tumult and violence of Italy's anni di piombo, or the "Years of Lead," a period of widespread social unrest, political upheaval, labor unrest, rising crime, political violence, and political terrorism from the 1960s to 1980s. During this period, paramilitary and militant political terrorist groups, both on the far left (e.g. the Red Brigades) and far right (e.g. the Neo-Fascist Nuclei Armati Rivoluzionari) engaged in kidnappings, assassinations, and bombings (such as the Piazza Fontana bombing and 1980 Bologna train station bombing). At the same time, there was a period of especially violent conflict and disorder within the Sicilian Mafia, kicked off with the "First Mafia War" of the 1960s and culminating in the "Second Mafia War" of the early 1980s. Italian organized crime groups such as the Sicilian Mafia, the Camorra, and especially the Roman Banda della Magliana were actively involved in both criminal and political activities during this time, carrying out bombings and kidnappings, making deals with corrupt politicians, and forming strong ties to extreme far right groups and Neo-Fascist terrorist organizations. Accordingly, poliziotteschi films such as Execution Squad (1972) often featured political extremists and paramilitary or terrorist groups alongside or in addition to the more commonly featured apolitical mafiosi and gangster criminal elements found in Italian crime films.[1][2][3][4][5]

Due in part to the genre's often ostensibly negative portrayal of political activists and militants, especially leftist militants, and its seeming endorsement of vigilantism and "tough-on-crime" or "law and order" stances, some poliziotteschi films (such as 1976's The Big Racket) were criticized by then-contemporaneous critics and accused of exploiting conservative fears of rising crime and political upheaval while containing "reactionary," pro-violence, or even quasi-Fascist ideological elements in their overarching message. These critiques were similar to those leveled at the 1970s American "vigilante films" of the same period, such as 1974's Death Wish, films by which the poliziotteschi genre were considerably influenced.[1][2][4][6][7]

In retrospect, despite contemporaneous claims in the 1970s of overly conservative or reactionary themes within the genre, film historians such as Louis Bayman and Peter Bondarella contend that, in fact, poliziotteschi films generally presented a more multi-faceted, complex outlook on the political turmoil and crime waves of the time, as well as violence in general, with Bayman and author Roberto Curti in particular arguing that the genre generally used political conflicts and violence for largely apolitical tension-building and cathartic or emotional purposes rather than to promote any particular political agendas.[1][8] Curti notes that the genre's protagonists often simultaneously displayed both right-wing and left-wing views, and protagonists were often proletarian while villains were often wealthy right-wing conservatives.[1] The film Milano Calibro 9 (1972), for instance, features protagonists of both right-wing and leftist ideologies and offers differing views on the causes of crime and the true antagonists of law-abiding Italian society, while Execution Squad reveals the actual antagonists of the film to be right-wing reactionary, "tough-on-crime" ex-police officers and vigilantes rather than the initially suspected leftist militants.[2][4] Rather than explicitly supporting violence or vigilantism, the genre just as often displayed a morally ambiguous or aloof position on these themes, or even presented vigilantism and violence as a no-win situation. Though poliziotteschi films have been viewed by some critics as condemning a "liberal" or "weak" judiciary system as ineffectual in its treatment of criminals, the genre also suggests a more general distrust of authority, whether left-wing or right-wing, by portraying right-wing law enforcement, politicians and businessmen as hopelessly corrupt and manipulative.[1][2] According to Bondarella, the "classic" poliziotteschi film reveals "almost universal suspicion of the very social institutions charged with protecting Italian society from criminal violence."[4]

"They [crime films] were really the same as the westerns, they just substituted cars for horses/carriages and switched the clothing" - Actor Tomas Milian talking about the similarities between spaghetti westerns and polizio genre films.

The genre's roots laid in a group of crime movies that were the forerunners to the genuine 70s polizio explosion. The most reknown being Giuliano Montaldo's caper film Grand Slam (1967), Mino Guerrini's Gangster '70 (1968), Carlo Lizzani's Bandits in Milan (known in the US as The Violent Four) (1968), and Un Detective (1969). It should be noted that Director Damiano Damiani who was known for dealing with political themes in genre stories as seen in the spaghetti western A Bullet For The General (1967) directed two movies starring Franco Nero (who would go on to work in the polizio genre with other directors). The films were Mafia (aka The Day of The Owl) (1968) and Confessions of a Police Captain (1971).

What became the hard edged, action packed, potboiler polizio films were actually influenced not by their Italian heritage, but specifically by the popular American crime films of the day, most notably Don Siegel's edgy urban thriller Dirty Harry (1971) starring Clint Eastwood (who, incidentally was the icon who starred in the first true spaghetti western A Fistful of Dollars). Taking inspiration from the rebellious Dirty Harry Callahan character, Italian genre director extraordinaire Enzo G. Castellari chose his own leading man Franco Nero, previously known to audiences as the mysterious spaghetti western anti-hero Django. In that film, Nero had been Director Sergio Corbucci's answer to his friend Sergio Leone's Man With No Name character played by none other than...Clint Eastwood. As you can see, the actors and directors from the USA and Italy seemed to influence one another respectively.

Other popular American films that had a large impact on The Italian polizio films included classics such as Francis Ford Coppola's mafia epic The Godfather (1972), William Friedkin's crime thriller The French Connection (1971) and Sidney Lumet's police corruption themed biopic Serpico (1973). All these Hollywood studio films gave the Italians a blueprint, if you will, as to how to approach their own genre stories which would actually turn out to be wilder, bloodier and even more outrageous.

Although based around crime and detective work, poliziotteschi should not be confused with the other popular Italian genre of the 1970s, the giallo, which were violent murder-mystery thrillers. Directors and stars often moved between both forms, and some films could be considered under either banner, such as Massimo Dallamano's What Have They Done To Your Daughters? (1974).

The poliziottesco subgenre gradually declined in popularity during the late 1970s. Screenwriter Dardano Sacchetti, who was unhappy with what he deemed the genre's "fascistic" undertones, credits himself for "destroying it from the inside", by making it evolve into self-parody. By the end of the decade, the most successful films associated with the genre were crime-comedy pictures, which gradually evolved towards pure comedy.[9]

The Films of Fernando Di Leo

Before directing his own films, Fernando DiLeo was a screenwriter who had worked in large part on spaghetti westerns, starting with Sergio Leone and his Dollars films. He then moved onto writing other classics of the genre such as Lucio Fulci's Massacre Time (1966), Johnny Yuma (1966) and Navajo Joe (1966). DiLeo's first crime script was for Gangster '70, which starred Joseph Cotten. After directing the giallo Slaughter Hotel, DiLeo made his polizio debut with Milano Calibro 9. In the film, Gastone Moschin plays Ugo Piazza, a low level mafia member who has just been released from jail. Ugo has immediately come under the watch of his old mafia aqquaintance Rocco (Mario Adorf) when the main mafia boss (Lionel Stander) suspects Ugo of stealing a large sum of money before his incarceration. Milano Calibro 9 is an explosively violent and very funny crime film. Right from the start, DiLeo made his own indelible mark on the genre, filling it with a grand, brutally operatic flavor. His follow up was La Mala Ordina (1972), in which Mario Adorf plays Luca Canali, a good-hearted pimp who is wrongfully accused of stealing a drug shipment on its way from the US to Italy. The US mafia send two hitmen played by Henry Silva and Woody Strode to kill Luca. Luca, who is unaware of his predicament until its too late, is the scapegoat in the story and must try to evade everyone until he finds out who set him up. In Wipeout! (1973) Henry Silva plays Nick Lanzetta, a tough mafia hitman who finds himself caught up in a war between families and which ultimately tests his allegiance to his mentor. Wipeout! is certainly one of DiLeo's best films in the genre and is filled with brutality, comedy and colorful characters. It is one of DiLeo's finest portrayals of life inside the mafia and the treachery and violence that hangs over it all. With Mr. Scarface (1976), the final installment of DiLeo's Milano Trilogy, there was a sense that the polizio genre was coming to a close. In the film, the main character is a loanshark's collector named Tony (Harry Baer) who is more like a freewheeling, bohemian college student than a grizzled mafia veteran. The main antagonist in the movie is "Scarface" as played by the great Jack Palance (who actually doesn't have alot of lines in the movie). The plot revolves around Tony and a new found friend Rick (Al Cliver), one of Scarface 's underlings who loses alot of cash during a game of craps in a local casino and must pay it back. Tony decides to help his friend deal with Scarface while he gets his own revenge for the murder of his father years earlier. The story provides a good amount of DiLeo style violence and thrills, but also showcases DiLeo's trademark snappy Italian humor as well. Interestingly, DiLeo's earlier films had a heavy rock score provided by composer Luis Enriquez Bacalov and the Italo rock group Osanna, this films music is very low key and sparse. The finale of the film has Tony and his two friends Rick and Peppi driving off together into a sunny future triumphantly after taking out Scarface and his minion.

One of the main differences between American made mafia genre films and the Italian polizios was the aspect of showing the mafia for what it really was. Filled with corruption, treachery and mistrust. While Hollywood films like The Godfather made the mafia out to be mostly honorable and rather classy, the directors in Italy like Fernando DiLeo, Stelvio Massi, Enzo G. Castellari, Antonio Margheriti and others dealt with their own personal views on how the police and government as well as the leaders of the mafia really operated in their country. In the 1970s, the real Italian mafia clans were spreading terror throughout the cities. Bombings and assassination attempts were a common thing during this time. This is why the mafiosi were shown for what they truly were: brutal, backstabbing scum who said they believed in loyalty and honor but were almost always giving in to desires that showed the exact opposite. The police were also not untouchable figures and were regularly portrayed as bumbling idiots with corrupted morals who had tendencies to be just as violent as the criminals they were pursuing.