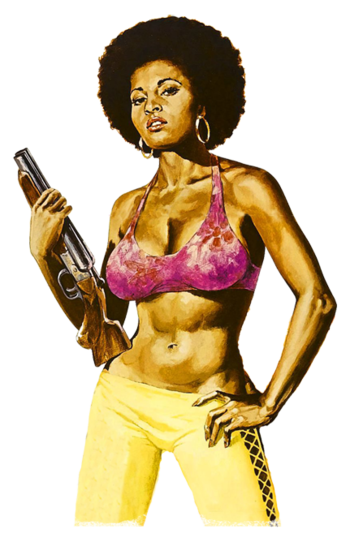 Pamela Suzette Grier was born on May 26, 1949, in Winston-Salem, North Carolina. Pam is the daughter of an army mechanic and a nurse. Consequently, she followed her dad around many army bases, including stays in England and Germany. Reaching her 18th birthday, when the family was now stationed in Denver, Pam became a contestant in the Miss Colorado Universe Pageant. Her first job in the movie industry was as a switchboard operator for American International Pictures, where she would be considered its Queen in the future. Soon after, she found herself cast in a cameo role for Russ Meyer's legendary cult classic Beyond the Valley of the Dolls (1970). Then came her first Women In Prison film The Big Doll House (1971) the following year.

Since that time, she has had roles in many motion pictures, including "Fort Apache, The Bronx," "Something Wicked This Way Comes," "Above the Law," "Bill and Ted's Bogus Journey" and "Posse." She most recently appeared in "Original Gangstas" and "Escape from L.A." She has made many appearances on television series such as "The Fresh Prince of Bel-Air," "In Living Color" and "The Cosby Show," among others. Her theater credits include Sam Shepard's "Fool for Love," which earned her an NAACP Image Award in 1986. In 1997, Pam got the lead role in Quentin Tarantino's crime caper film Jackie Brown based on the Elmore Leonard novel Rum Punch. Pam was back and hotter than ever. Her performance in the film showed just how great she really is. Pam can do it all!