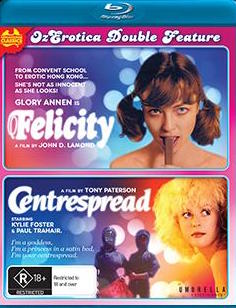 CENTRESPREAD: In a world at the brink of the 21st century, where strict social stratification is rigidly enforced, where spending power is related to social utility rather than to productivity, and the only manifestation of violence is in magazine pages, a photographer whose special talent is mixing violence and sex, is told to find a new girl whose freshness will rejuvenate the pages of the magazine. Gerard (Paul Trahair) not only fulfills his task but also rediscovers innocence and a world left behind by advancing technology when he uncovers Niki (Kylie Foster, Quigley Down Under). But love is not in the Editor's plans and he offers Niki a choice - stardom or the love of a redundant photographer....