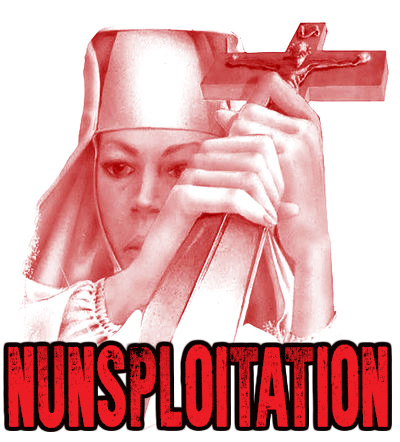 Fetishized images of naughty nuns; sisters whose fidelity to God is challenged by their own overwhelming libidinous desires, are common in many modern media but the cult film sub-genre affectionately known to its enthusiasts as the Nunsploitation movie has a particular genesis and lifespan the focal point of which is Italy in the 1970s.

Cinematic inspiration for the Italian cycle of Nunsploitation films appears to come directly from Ken Russell's notorious The Devils released in 1971 and starring Oliver Reed and Vanessa Redgrave. Set in 17th century France the plot follows Reed’s Father Grandier as he falls victim to a politically motivated plot designed to strip him of his station. The priest’s charismatic appeal to a convent of hysterical, randy nuns who idolise him proves to be his undoing. Russell's film contains many of the elements that would soon come to characterise the sub-genre. The controversy that surrounded its release no doubt appealed to exploitation film producers keen to capitalise on such publicity however few subsequent Nunsploitation films would come close to reproducing the shocking imagery of 'The Devils'. The film suffered heavy censorship and even now, over 40 years later, it is difficult to see it in its fully uncut form.

The template for most Nunsploitation movie narratives can be traced back to the true story of the fabled Nun of Monza, a tale which has been retold many times in Italian literature and film. In the late 17th century 14 year old Marianna de Leyva, daughter of a powerful aristocratic family, was sent against her will to the convent of Santa Margherita in the town of Monza. During her time there Sister Marianna continued an affair with a lover who lived in a house adjacent to the convent. This affair produced 2 children and the lovers went to great lengths to keep their relationship secret. When another nun threatened to expose them the pair murdered her. Eventually their transgressions were made public and, following a long trial by Inquisition, Sister Marianna was convicted and spent the next 14 years locked in a 6 foot by 3 foot cell.

The premise of most Nunsploitation movies revolves around a young woman who has done something to offend male figures of authority and is forcibly sequestered in a convent for her supposed moral protection. Once inside the girl often encounters a tyrannical Mother Superior whose own supressed sexual desires find expression in sadistic punishments meted out to disobedient novices; other young nuns who, when they are unable to smuggle lovers into their chambers under the cover of night, indulge in lesbian liaisons and the exchange of homemade pornography; and a visiting priest whose presence often inspires the nuns to further frottage and frenzy. The common explanation given for nuns' licentious behaviour is of course demonic possession and this usually necessitates some form of communal exorcism.

In its generic elements and mise en scene the Nunsploitation movie is a close cousin to the Women in Prison film. The 2 sub-genres share many narrative themes and contrivances: the naïve novice unfairly imprisoned; the sadistic Warden/Mother Superior; the boiling over of sexual desires when institutionally oppressed.

Superficially the Nunsploitation film would appear to represent the ultimate male chauvinist fantasy; the gaze of the audience encouraged to invade the privacy of a group of captive virgins. The viewer is privileged much like a lover smuggled into this exclusive feminine space and this voyeurism is rewarded not just with the sight of young nuns disrobing and licking each other from head to toe but also in the revelation of scandalous secrets and murderous schemes which create narrative intrigue.

Rather than simply making visible what is usually hidden for the purposes of titillation I would suggest that it is in fact the erotic elements in the Nunsploitation movie that provide it with its satirical strength. All of these films depict sexual expression as a healthy, natural thing and an important part of a person's emotional constitution however neurosis and self-loathing develop when these desires are condemned, controlled and repressed by patriarchal social institutions such as the Catholic Church. In this regard Nunsploitation films take a political stance by representing a negative view of these institutions and as much as they may encourage the pleasures of voyeurism they also align audience empathy with the individuals beneath the wimples; we are encouraged to want to see the forbidden lovers escape the convent walls, to see the pervy Padre stripped of his position of patriarchal power and to see the nuns in a fervent finger-licking frenzy - unabashed, unashamed and undressed.

Although undoubtedly significant the prominence of the Catholic Church in Italian society is perhaps a less direct influence on the profusion of Nunspolitation films made in Italy in the 1970s than the economics of the exploitation film industry at that time. Popular Italian film genres such as the peplum, the giallo and the cannibal movies were crowded with as many imitators as innovators and the large number of Nunsploitation movies made in a relatively short period is consistent with this pattern. As previously noted producers were obviously keen to cash-in on the notoriety of Ken Russell's The Devils so welcomed any controversy and it’s worth noting that these were many of the same filmmakers who were concurrently churning out a cycle of Nazi-themed sexploitation films so it’s doubtful that they were too concerned about who might take offense.

Among the many Nunsploitation titles produced in Italy during this period are The Nun of Monza, Story of A Cloistered Nun, Behind Convent Walls, Flavia The Heretic, Killer Nun, The Sinful Nuns of St. Valentine, The Nuns of St. Archangel, The Abbess of Castro and Our Lady Of Lust.

Two notorious directors who are both well known for contributing significantly sleazy entries to almost all Italian exploitation movie sub-genres also helmed notable Nunsploitation movies: Joe D'Amato with Images In A Convent and The Convent of Sinners and Bruno Mattei with The Other Hell and The True Story of the Nun of Monza.

Even Black Emanuelle herself Laura Gemser got in on the sister act renouncing her decadent ways and donning a wimple for 1977's Sister Emanuelle.

Italy was not the only country to exploit the bad habits of nasty nuns in cinema at this time. During the golden age of the exploitation movie in the 1970s naughty nun cinema exploded around the globe.

Having contributed entries to almost every exploitation movie sub-genre it's hardly surprising that workaholic Spaniard Jess Franco should also be responsible for Nunsploitation outings The Demons and Love Letters of A Portuguese Nun. The latter story was re-told a couple of years later by The Living Dead at Manchester Morgue director Jorge Grau as simply Love Letters of a Nun.

Japan too embraced the naughty nun and produced some of the most stylish of all Nunsploitation movies including such perverse delights as Nikkatsu studio's Sins of Sister Lucia, Cloistered Nun: Runa’s Confession, Sensual Sanctuary and Norifumi Suzuki's jaw-dropping School of The Holy Beast.

For an exhaustive catalogue of Nunspolitation movies and insightful analysis of the naughty nuns' persistent popularity in art, literature, film and other aspects of visual culture Steve Fentone's book AntiCristo: The Bible of Nasty Nun Sinema and Culture published in 2000 by FAB Press is essential reading and packs in an abundance of eye-watering explicit illustrations that will have all but the most devoted reader reaching for their rosary beads.

Where Do I Start?

For novices the following 5 films are recommended as an introduction to the illicit thrills of the Nunsploitation film and represent a good example of the themes and imagery prevalent throughout the genre. Amen.