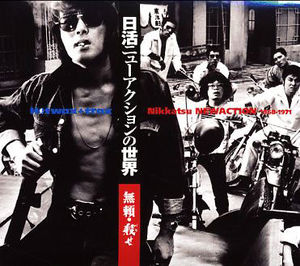 A collection that's every bit as great as you'd guess from the title and the cover -- filled with bold sounds from Japanese action films at the end of the 60s, all awash in fuzzy guitars, funky rhythms, and lots of other groovy touches! The music here is as bold as the films for which it was recorded -- often striking, jarring, and extremely in your face with its blend of shouted lyrics, raw guitars, and hard driving drums -- often produced so that the roughest edges of the tracks come center stage, to be mixed with surprising other bits that come out of nowhere and really spice up the tunes. There's really no easy referent that we can think of for this music -- as some of it has roots in American garage rock from the 60s, but there's plenty more soundtracky touches too -- bits of crime taken from European films, and some of the funkier moments to come in American cinema as well. Package features a great booklet of images and Japanese text, as well as a fold-out movie poster -- and CD features 16 tracks by artists who include Flowers, Mops, Koichi Sakata, Harumi Ibe, The Swing West, Mina Aoe, Isao Bitoh, and others.