Night of the Werewolf/Vengeance of the Zombies (Blu-Ray)

< Night of the Werewolf 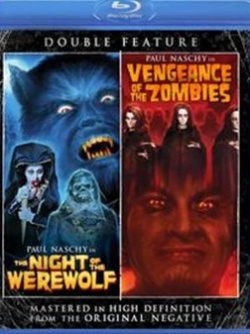 Night of the Werewolf: Filmed in the real castles of Spain, The Night of the Werewolf is one of Naschy’s most impressive films, a sumptuous Gothic feast that pits Naschy’s werewolf, Waldemar Daninsky, against the Blood Countess herself, Elizabeth Bathory. Filled with werewolf transformations, seductive vampire women, bloody stakes and piercing silver daggers, the film has garnered praise for its fantastical inventiveness and use of macabre imagery. It remains one of the crowning glories of international horror cinema.