< Night of the Creeps 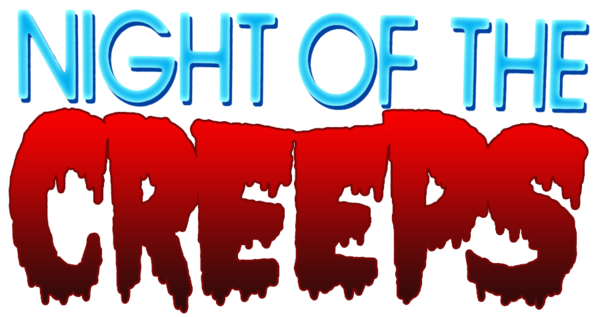 Night of the Creeps is about an alien worm virus sample that gets jettisoned out of a space ship by a rogue alien scientist….thing. Yeah, it gets better. That sample lands in California in the 1950’s in a small college town on the eve of the big sorority formal. As if the sock hoppers didn’t have enough to deal with, what with there also being reports of an escaped mental patient hacking people to bits up and down the highway. A young couple find themselves at lover’s point when a giant ball of light crashes into the ground. They investigate and not only do they find a crater containing a canister of slug-like creatures, but there is also a dark figure in blood-stained scrubs watching from the shadows. How will they……die…..first?

Flash Forward to 1986. Same town, same school, same formal. This time we follow a couple of terminal social misfits, JC and Chris. While Chris makes a habit out of cowering in fear of his own shortcomings, JC (crippled and walking with the help of crutches) has no problem walking up the to pretty girl or throwing snark at the neckless jock. Chris is in love with Cynthia but finds himself detrimentally unaffiliated (Greek-wise) and so he can’t ask her out. JC hatches a plan to join the frat by completing their most bizarre of initiations: procuring one dead body. JC knows the perfect specimen: a cryogenically frozen murder victim from the 1950’s currently residing in the basement of a nearby laboratory. But what they find living in the corpse will seriously ruin their evenings…if not doom the whole world.

I love this movie so much it makes my toes wiggle. You know that feeling when you find a pair of jeans that fit so well, and are so comfortable, that even though you know they are mass produced, you wonder if they were created just for you? This movie fit me like those jeans. Let me start the geek-gasming with the overall concept at play here. We have a very 80’s horror film with the sensibilities of 50’s B-horror. We the gore-happy effects (and by that I of course mean splatter fun with no hint of pretense) teamed with over-the-top characters who seem to exist in their own parallel dimension of goofy. But we also have a premise and a threat that mirrors that of the work of Ed Wood An alien force that reanimates the dead in an effort to cause global chaos? Yeah, sounds familiar. I wouldn’t call it a remake of Plan 9 From Outer Space, more like a re-imagining with the sweet, cheesy gloss of the 1980’s. There is even a scene in which a woman gets axed while watching Plan 9 on TV! 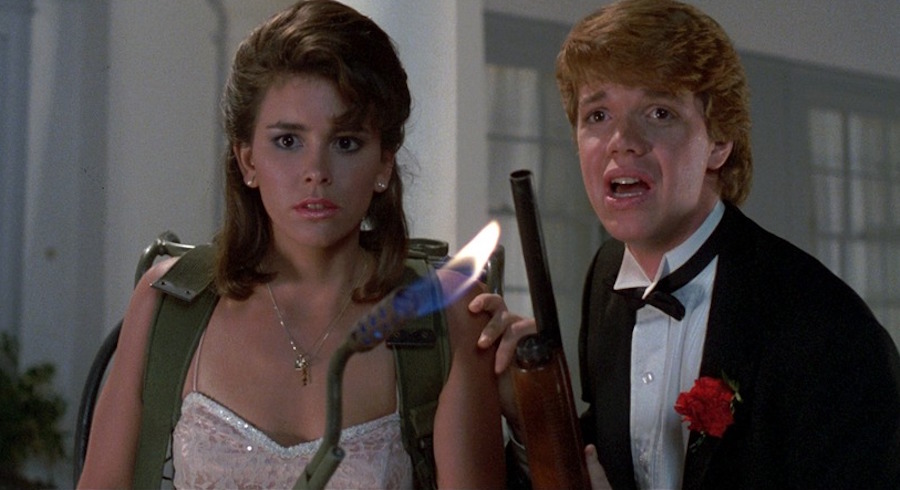 The characters are fantastic in Night of the Creeps. I mentioned that they are over-the-top but, much in keeping with the 80’s, they are also quite loveable. JC is hilariously uncouth and even makes fun of his own disability in a way that makes him laugh and everyone else squirm. Classic! Cynthia is vapid, but boobular (yeah, it’s a word….a word from the 80’s) and Chris is the consummate geek that has to succeed so the rest of us don’t despair our ranks. I really enjoyed it when his killswitch got flipped and he went Rambo on the space slugs.

But the champion character work in this has to be that of Mr. Atkins. He plays a cop plucked off the pages of a dime pulp novel. His character is responsible for the slightly tardy slaying of the escaped mental patient; his girl was the one disassembled at said psycho’s hand. He chews the scenery in much the same way as his perpetual cigars. He is a no nonsense badass who is as quick with the black comedy one-liners as he is his revolver. He storms into every room demanding “thrill me”; his mantra of grizzled frustration. He is actually playing a far more iconic version of his “sole believer” cop character that he played in Maniac Cop.

The gore? Uproariously awesome! I howled at each and every head-splitting, I cheered every chop, and I fist-pumped every fireball. I mean this is essentially a zombie movie with alien slugs bursting triumphantly from peoples’ heads, so gonzo effects are to be expected. The gore works for me because it strikes a nice balance between shock and laughs. It’s that goopy, silly violence that makes you cheer and chuckle rather than squirm and moan. It’s a fine line to walk: cutting back too much loses hardcore horror fans and overdoing it ruins the spirit of the film. Fred Dekker pulls it off nicely as humor is used with equally tenacity to a flamethrower.

Fred Dekker is quickly becoming a favorite director of mine. The guy understands great storytelling and speaks to movies geeks because….well, he is one. He writes movies based on the films he loved as a kid and directs them with style and a competent hand that reflects a childhood longing to see old films in a new light. I loved Monster Squad’s take on the Universal monsters as much as Night of the Creeps' on Ed Wood. Be on the look out for the DVD with Fred’s original ending restored which is far better than the one on the VHS! 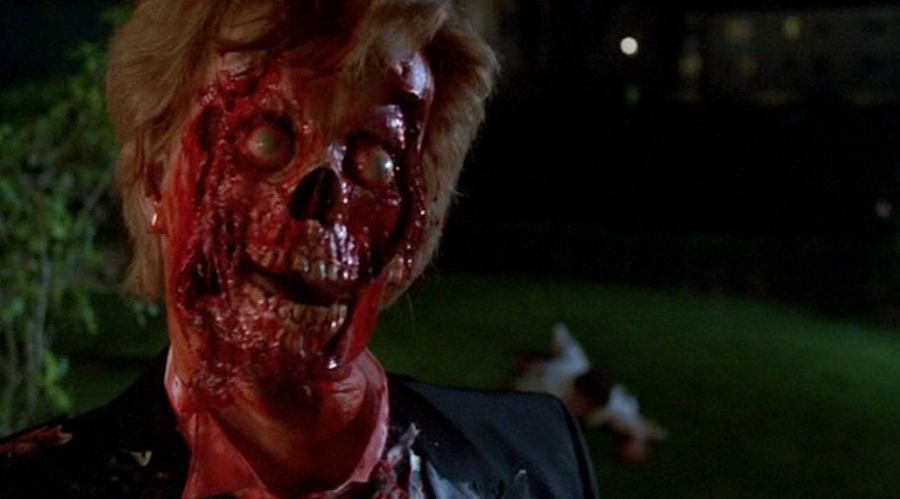 I saw this film for the first time at the Alamo Drafthouse here in Austin with Fred Dekker and the whole cast live in person. It was one of the best movie-related events of my life. I got to see this priceless gem with people that just plain get it. Not just the friends I came with or members of the audience, but the actors and the director as well. Tom Atkins is one of the sweetest guys on the planet. He was nice enough to pose with me and even hugged me when I presented him with a beer I had purchased for him. Fred Dekker credits the ADH with the release of the Monster Squad 20th anniversary DVD. It was the place where he realized the film had found an audience; years after its theatrical release. I don't want to sound like I'm bragging, but it's no coincidence that we are getting this on DVD for the first time ever in October with the ADH screening Q&A as one of the special features. YEAH!

There are two versions of the film's ending. The version tagged onto the theatric and subsequent VHS release ends with Chris and Cynthia watching the sorority house burn down when the dead cat returns. The scene ends when the cat opens its mouth and a slug jumps out at the camera.

This was not what Dekker intended, however. The ending he wanted: the scene of Chris and Cynthia standing in front of the burning sorority house moves to the street where cop cars race down the street. The charred and zombified Cameron is seen shuffling down the street when he suddenly stops and falls to the ground, his head explodes and the slugs scamper out and head into a cemetery. However, the spaceship from the beginning of the film has returned with the aliens intending to retrieve their experiment.

The later ending wound up never making it when Dekker made the admitted mistake of showing it to the studio before the effects were done. Not impressed with what they saw, they requested a different ending that became a cheap scare. Dekker's original ending has been seen in some television broadcast versions of the film, some of the US VHS copies and is available on bootleg DVD copies being sold on eBay and will be on the intended official DVD release of the film.