As a huge fan of 80s movies, I'm slightly ashamed to admit I've never seen Flashdance. I'm not quite sure why, but I'm not against throwing it in my Netflix queue one day. I can, however, say with unquestionable certainty that even if I do eventually check it out, it will never, ever hold a candle to Lucio Fulci's Murder Rock.

Now of course, I'm saying this with a huge bias in favor of Fulci. Zombie (Zombi 2) was the first Italian horror movie I ever saw, and pretty much anything of his involving the supernatural ranks quite highly in my book (with the exception of maybe Manhattan Baby).

I even love his earlier gialli and non-zombie movies, including The New York Ripper and Don't Torture A Duckling, I really hope to get into his lesser-known spaghetti westerns and crime thrillers later this year.

Anyways, the film starts out at a prestigious New York dance academy, with an intense tryout underway for an upcoming Broadway show. Tensions are high among those who are fighting for the few open spots, and nerves are shattered further when the competition starts getting bumped off by a mysterious killer.

Armed with chloroform and a jeweled hairpin, our crazed murderer drugs his victims and proceeds to pierce their heart with the deadly instrument, but not before unbuttoning the girl's blouse and exposing their breasts (in true exploitative fashion, of course). The instructor (Olga Karlatos of Zombie fame, keeping both eyes intact for this role) races to discover the perpetrator before too much blood is spilled.

Unfortunately, for most people this will probably be a "love it or hate it" type of film. If you don't like synthesizers or cheesy 80s dance music, avoid Murder Rock at all costs, you won't make it through the first five minutes. If you're like me, however, you'll absolutely love every second of it. 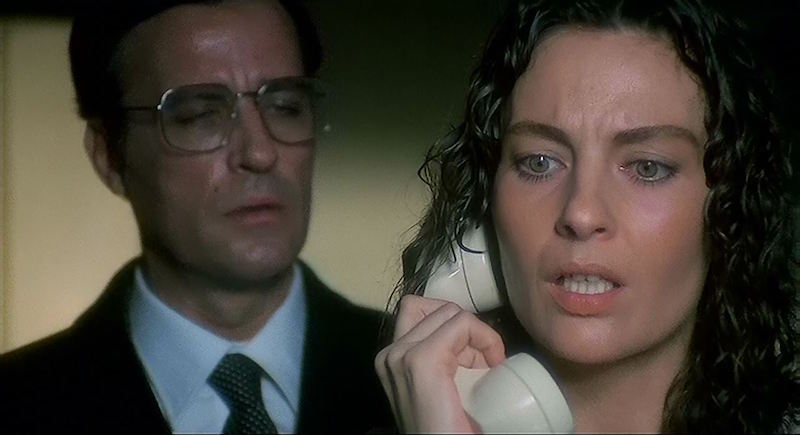 It's too bad that most people aren't willing to look past the fact that the film is slightly dated, and will turn their noses up simply because the characters dressed silly in 1984 when compared to today's fashion standards. To those people claiming to have superior tastes, I label you as just plain ignorant.

Keith Emerson (Inferno, Nighthawks) provides the amazing soundtrack, including a number of memorable selections such as "Tonight is the Night" and "Are the Streets to Blame" (A quick search on YouTube showcases a great montage of these catchy tunes).

Also, color me surprised as to how well-paced this movie felt. The body count isn't incredibly high and the kills aren't gory, but they are spread out nicely and I didn't feel as though the film dragged at any point. The fact that there is also a fairly coherent storyline is also worth noting, especially if you are accustomed to the usual Fulci fare (although he does throw in a surreal dream sequence or two for good measure).

As is the case with most entries in the slasher genre, Fulci throws a number of red herrings at us, including the stereotypical creepy boyfriend (Cristian Borromeo, perhaps best known as the guy who gets his face bashed in by David Hess in The House On The Edge of The Park), the academy director with a taste for young girls, and the male model with a dark past.

By using this tactic, I must admit that with everyone marked as a suspect, I was wrong about the killer's identity. There is one scene in particular towards the end that works exceptionally well at misleading the audience, and I was surprised as well as delighted that Fulci was able to pull the wool over my eyes.

I could continue gushing over this film, but you get the idea. Also known as Dancing Death and Slashdance, seek out the 2-disc special edition put out by Shriek Show if you can. I haven't exhausted the special features yet, but there are numerous featurettes about Fulci and co-star Ray Lovelock on the second disc, so right there it goes to greater lengths than most Media Blasters releases.

Truthfully, even if it was a barebones DVD with a grainy transfer and poor audio, the fun I had with Murder Rock on its own merit is worth the recommendation alone.