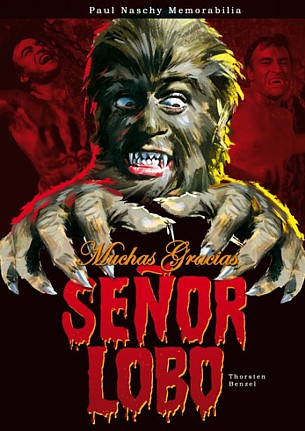 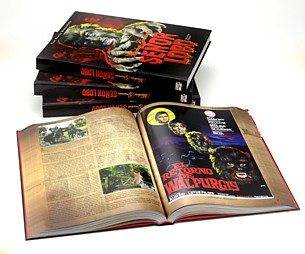 Thorsten Benzel’s pictorial tribute to the fantastic films of Spanish horror legend Paul Naschy, ‘Muchas Gracias Senor Lobo’, is quite simply one of the most beautifully designed and exhaustively researched film books I have ever read. It is no exaggeration to say that on first opening the almost 400 page hardback tome, and leafing through its dazzling collection of exquisitely reproduced posters, lobby cards and ad mats, tears welled up in my eyes. Here was a work of beauty, of mad obsession with cinematic ephemera, of extraordinary love and creative monomania.

Containing 1200 images including more than 170 full colour posters the book devotes a chapter each to 30 of El Hombre Lobo’s greatest fear films from the period 1968 to 1988 with an additional section covering other entries in Naschy’s filmography up to the 21st Century. Make no mistake, this book does not contain an indepth analysis of Naschy’s career or artistic output, it is a book about the methods of marketing and advertising films during the golden age of European horror and exploitation cinema. The book does not contain detailed plot synopsis or reviews of the films in question. It does however contain a jaw-dropping volume of detailed insight into the way these films were promoted in various countries around the world and it’s hard to imagine a more comprehensive compilation of Naschy related promotional materials being assembled anywhere. ‘Muchas Gracias Senor Lobo’ is sure to fascinate anyone interested in exploitation film history, to intrigue anyone with an interest in graphic design, to overjoy any fan of classic exploitation movie posters, and is guaranteed to delight Naschy fans the world over. Highlights are simply too numerous to list; every damn page is a highlight! Just check out the incredible Canadian admats for ‘Werewolf’s Shadow’ double billed with Jess Franco’s ‘Dracula, Prisoner of Frankenstein’! What about the outrageous German poster for ‘Dr. Jekyll and The Werewolf’?! And how about that great pic of a grinning Paul Naschy posing with four naked actresses behind the scenes on his directorial debut ‘Inquisition’?!

All text is printed in both German and English and the hardback binding of the 2012 edition is of the highest quality imaginable meaning the 39,50 euros cover price is more than justified. Benzel deserves the thanks and admiration of all Naschy film fans for his dedication in producing this incredible archive. I cannot imagine a more lovingly crafted tribute to the memory of one of horror cinemas most beloved stars. Muchas Gracias indeed!