Pity the Moonshiner’s Woman, or should you? A gal called Lorilee strolls through the woods along a winding country road while the opening credits roll; she returns to her beau, local moonshiner Claude, who yells at her and asks where she’s been. However, just minutes later, Lorilee witnesses Claude’s murder at the hands of ruthless Mafia gangsters who pay him a visit after discovering that he’s been keeping more than his fair share of the moonshine profits they control.

Next thing she knows, Lorilee is riding off with the gangsters in their big black Cadillac and modeling a wardrobe of fancy new clothes in a hotel room while boss man Brad Jarvis (Donn Davison) lounges bedside admiring his new acquisition. Enticed by all the attention, Lorilee happily flies down to Daytona Beach with Brad and his henchman/magician pal, Mitch, played by real-life magician Roy Huston. 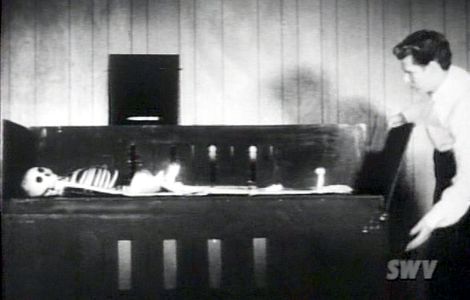 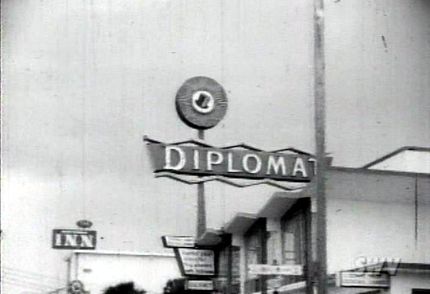 While cruising down the main strip in Daytona Beach with her new friends, Lorilee thinks out loud via on-screen narration about how wonderful everything is and how she’s glad her old man died “since all he ever cared about was moonshine and sex.” Endless shots of Daytona’s downtown shopping district fill the screen with wonderful vintage views of hotels, storefronts and neon signs during an annual “bike week” gathering of motorcyclists that’s still held in Daytona every year. Although interesting viewing some fifty years later, this candid mini-tour of Daytona Beach would have been an awfully boring stretch of time-killer for drive-in patrons paying to watch this back in 1964.

Brad operates his vice racket out of Daytona from a second floor office above a local restaurant where Mitch entertains dinner guests with his girl-in-box-turns-into-flaming-skeleton magic act. Mitch is told to show Lorilee a good time for a few days before the axe falls and Brad adds her to his stable of working girls. Setting out on their own, Mitch and Lorilee play on the beach, grab a hot dog at a beach-side stand, watch some motorcycle races at the Daytona racetrack, and finally end up at Mitch’s apartment for a few drinks and kisses.

Brad gets wind of the after-hours activities, and shows up suddenly at Mitch’s apartment where a fight breaks out. Brad strangles Mitch with an electric cord in front of a terrified Lorilee, before whisking her back into town. Lorilee is set up with her own apartment where Brad expects her to “entertain” clients. One of Brad’s other girls walks into the apartment, sneers at Lorilee, and tells her that Jarvis is her man. Lorilee innocently replies, “I’m not interested in him, he promised me a position,” a line just begging for the saucy rebuke, “Yeah, I know exactly what position he’s got for you!” Lorilee calls the gal a bitch, and a cat fight erupts there in the living room. While rolling around on the floor, the two actresses try to suppress a smile or two, obviously not given direction about how to fight for the camera. All the fun and games come to a grisly end when Lorilee grabs a stray piece of wood(?) and beats the other girl’s head in. 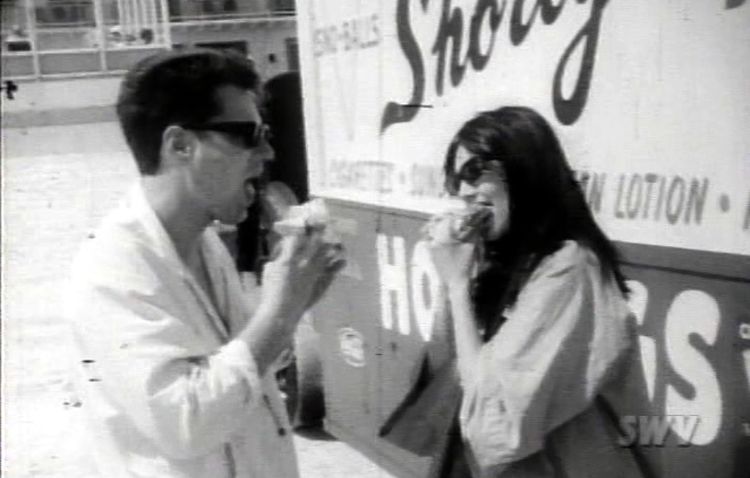 Horrified by what she’s done, Lorilee wastes no time calling the police. While waiting for the cops at Brad’s nightclub, Brad and one of his goons show up and initiate one of the weirdest close-quarters gun fights ever committed to film when they run into the police. Ineffectively “hiding” behind chairs and tables, the actors involved don’t even have blanks in their weapons, so instead they shake their pistols in the general direction of their targets.

Imagine, after this weird footage was filmed, some unlucky crew member got to spend unknown hours laboriously scratching the film’s negative frame-by-frame with a pin to simulate the effect of a blast exiting the barrels of those silent guns! The final result is nothing short of incredible once the simulated gun shaking is combined with the scratches and sound effects of guns firing - truly an inspired bit of do-it-yourself cinema. Moonshiner’s Woman was filmed entirely without sound, a trick that makes editing footage so much easier because whoever splices the film together doesn’t have to worry about keeping the sound track synched up with the picture once scenes are removed or shuffled around. After editing the picture, a sound track consisting of nondescript library tracks and a narrator filling viewers in on details was added. Strangely, scenes appear suddenly at various points in the picture where dialogue is actually spoken by the actors, abrupt changes oddly out of place where otherwise constant narration is present.

Anyway, back to the shootout. Brad jumps on stage and decides to hide in the evenings magic trick, hide being absolutely the wrong verb to use because the cops are crouched down behind tables and chairs a mere arm’s length away. After Brad pitches himself into the magician’s box, Lorilee runs up after him, locks the lid, and throws a match inside. Miraculously, one cardboard match causes the entire box to go up in flames along with the unlucky mob boss trapped inside. As the flames die down, Lorilee and the cops stand staring at the smoking remains of Brad Jarvis while the screen fades out. The following morning, Lorilee struts along a suburban street and catches a ride with a truck driver. The ever-present narrator remarks that Lorilee “has seen a lot of things, and had many adventures, but that’s a story for another time…..” as though director Donn Davison was already planning a sequel to what he knew would be a huge box-office hit! There never was a sequel. 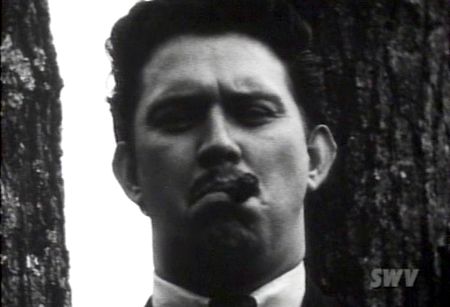 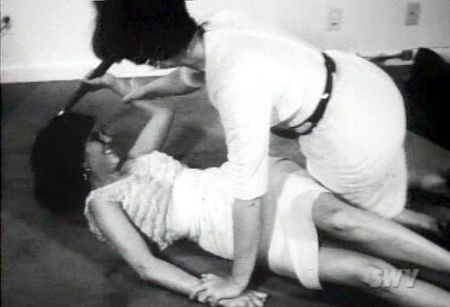 Aside from the few killings, all the nefarious involvement in crime that Brad Jarvis takes part in is only mentioned as part of the on-screen narration. During a hilarious scene in which all of the mob’s cronies gather at a table to discuss business, a soundtrack better suited for a television commercial advertising spaghetti sauce is used in an attempt to underscore the idea that the gentlemen involved are all Italian!? While the camera pans over the men seated around the table, the narrator remarks that these individuals are responsible for selling drugs to school kids, collecting extortion money, and running prostitution rings.

Guided by the hand of independent wunderkind Donn Davison, this b&w marvel fails to offer much in the way of nudity, sex, action, or violence, mainstays of many no-frills exploitation movies. Most of the film focuses on Lorilee and her “gee whiz” innocence at the new world she suddenly finds herself thrust into after being plucked out of the woods. Taking every odd turn in stride, no amount of violence, illicit drugs or physical persuasion seems to rattle Lorilee for very long. Although basically a “good girl gone bad” story, there’s strong evidence that the sudden turn of events in Lorilee’s life has not had the usual ill effects on her well-being. All viewers really know about the moonshiner’s woman before her trip to Daytona Beach is that she hung around with an abusive moonshiner. Aside from a murder that she apparently gets away with, Lorilee survives her mafia adoption seemingly none the worse for wear, ready to conquer new territories by movies end.

Aged gracefully like the finest wine, what began as an unremarkable low-budget experiment in do-it-yourself filmmaking has reached a palatable blend of vintage nostalgia mixed with genuine and long-lost road show bravura, adding a robust bouquet of celluloid tastiness to Moonshiner’s Woman some 30-odd years after its production.