Public domain is a great source for movie lovers. There, you could find a classic masterpiece Night of the Living Dead, a sleazy psychological/thriller Driller Killer, or a schlock movies like Monstroid. Originally released as Monster, this 1980 film is another example of how NOT to make a horror film. In fact, it reminds me of another godawful boring movie called Night of Horror (which is one of the most generic title for horror film of all time). It has the same picture quality (we'll talk about that later), the boring dialog, and the claim that this film is based on true story.

The first thing you see in the movie is the claim that movie based on the real "incident occurred in June 1971 in Colombia". At this point, you might think that the monster could be a dog or, you know, generic animals that could've turned wild due to a bad environment. But since the plot is about a cement factory that pollutes nearby water, any REAL animals can't live in that environment anyway. So, we have to believe that the giant paper/rubber monster that eats a lot of people is based on a true story. The main characters in this film are completely uninteresting. There's a survivor of one of this monster's attacks that many people call "witch" because nobody believes her, a guy who is sent to Colombia by his pervert boss who likes to touch the secretary's butt to find out about the anti-factory movement in the town, and there's a news reporter who doesn't give a damn about her job since most of the time she says everything with a straight and boring face. Luckily, there are two interesting characters in this film. First, the priest (played by John Carradine) who tells civilians that the monster is sent by God due to get the many sinners in the town. Another character is, well, I don't remember her name but she's the ex-wife of a cement owner named Pete. She looks cute and sexy and later she is eaten by the monster in a super cliche way. She's lying on the beach and then BAM! the monster comes out, she falls down immediately after standing for a few seconds. I mean, she doesn't even try to run from the monster at all. When the hands of the monster come really close to her, you guessed it, she's just doing nothing but screaming! 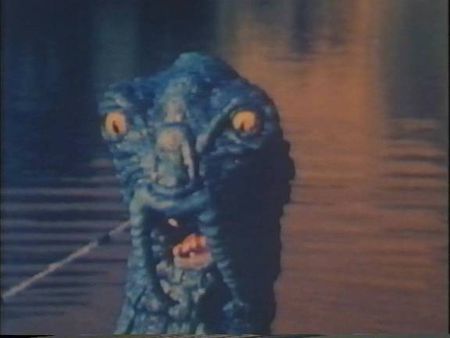 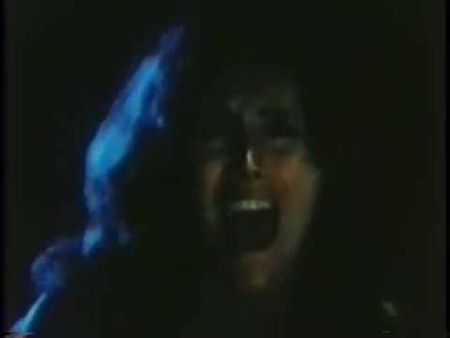 The whole film is dull and really boring, why? The dialogue is supposed to tell us what's going on, but since there's no tension, no excitement, and nothing going on in this film at all, it's useless. To make things even worse, believe it or not, the production was halted for eight years! The filming began in 1971 and nobody wanted to do it. Later, Kenneth Hartford filmed new parts of the movie including two kids as supporting characters. You could clearly see that these two characters are added awkwardly to the film because their only mission is to find a monster in the lake. You see them talking about finding the monster, then it just cuts to other characters talking, then cuts two these two kids waiting for the monster to show up, then cuts to another pointless scene, then cuts to two children running away from monster. It reminds me of Godfrey Ho's films or an early 70's movie called Doomsday Machine, which has the similar fate as Monstroid.

Since this film is in public domain, the picture quality is horrible. It's really yellow-ish. In fact, there's a reviewer on iMDb that made a joke that most of this film "seems as if someone smeared tar over the camera before filming.". Also, in the opening credit, there's an alternate title card thats awkwardly placed over the original title (just like opening the title of Quentin Tarantino's Death Proof). The worst thing is that there a few scenes where the picture is literally bouncing, it's unwatchable and almost made me have a headache.

In conclusion, this could possibly be the worst movie I've reviewed on this website. No horror, no shock, no entertainment value at all. But if you want to see it, make sure you watch it with friends and riff in the MST3K style or watch Elvira's Movie Macabre version of this film. They are a lot more enjoyable.