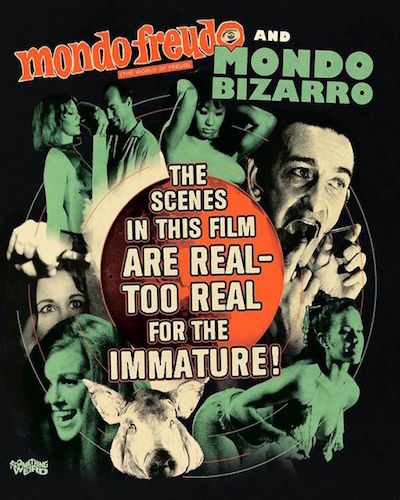 Armed with hidden cameras, infra-red film and plenty of naked women, the guys who made House on Bare Mountain go sociologically insane with Mondo Bizarro and Mondo Freudo, two hilariously sex-crazed shockumentaries from the Swinging Sixties that run the gamut from the real to the unreal to the downright surreal! Witness the orgiastic excesses of a Voodoo ritual "held every Thursday night" in the Bahamas, and Puerto Rican black mass performed "just 17 blocks off Times Square!" Gawk as beautiful Asian strippers are whipped and clawed for the amusement of a blasa audience at a Japanese nightclub "dedicated to sadism!" Cringe as a creepy guy named Jack Schwartz proves he can't bleed by lying on a bed of rusty carpentry nails, then gleefully jamming one through his mouth! Marvel at the wild underworld of underwear with a peek at Frederick's of Hollywood naughty mail-order lingerie and big-breasted gals trying on brassieres in a Chicago department store! Plus: Lesbian prostitutes in London, male hustlers in L.A., topless bars in Tijuana, and even an "Arab slave auction" held right in front of Robot Monster's Bronson Canyon cave! They're all here and more in Mondo Bizarro and Mondo Freudo, the mutant mondo double feature that asks the question: "How do you know what is beyond the Beyond? For that matter, do you even know what is behind the Beyond?"