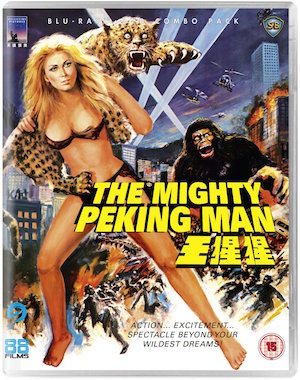 Synopsis: King Kong comes to Hong Kong in The Mighty Peking Man, a uniquely Shaw Brothers spin on the ageless theme of beauty and the beast. The beast, seven stories high and hailing from the Himalayas, makes his way to the jungles of India in the wake of a violent earthquake. The beauty is Swiss starlet Evelyn Kraft, a sexy blonde Tarzanette who is the Mighty Peking Man's best friend. Both are discovered by Danny Lee, a handsome young explorer who brings the odd couple back to Hong Kong, where Evelyn is almost raped and the monster runs amuck. Instead of the Empire State Building, the special effects laden climax takes place at the Connaught Centre, then Hong Kong's tallest building. Plenty of action, location shooting in India, and an inter-racial romance make this one of Shaw Brothers' most unique motion pictures. Variety's verdict: "High camp, Chinese style."