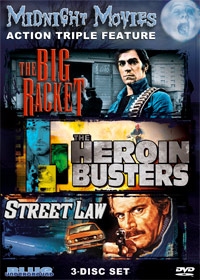 The Big Racket: Fabio Testi (REVOLVER) stars as Inspector Nico Palmieri, a tough police detective tearing apart Rome to bust a ruthless protection racket. But when these violent thugs expand their empire into drugs, rape and murder, Nico throws away the rulebook to unleash his own brand of justice. In a city ruled by fear, there's a fine line between cop and criminal...and one lawman is about to blast it to pieces!

Street Law: The legendary Franco Nero (of DJANGO and DIE HARD 2 fame) stars as Carlo Antonelli, an average citizen until the day he is brutally beaten during a violent robbery. But when the police drop the case and the suspects remain free, Carlo is pushed beyond his breaking point. Now one man will launch an all-out war against the criminal scum who plague our cities, where justice has its own rules, vengeance needs no badge and the only force that matters is STREET LAW.