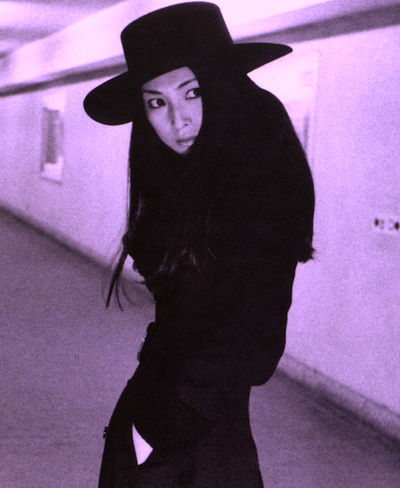 Meiko Kaji (born March 24, 1947) is a Japanese actress and singer. She has appeared in about 100 films,[3] with her most famous roles being outlaw characters in early 1970s films, such as the rebels of the Stray Cat Rock series, the assassin Lady Snowblood, or the murderous Sasori from the Female Prisoner 701: Scorpion series.

Meiko Kaji was born in the Kanda area of Tokyo and graduated from the Yakumo Academy high school in Meguro, Tokyo. She began work in the film industry under her real name, Masako Ota, at Nikkatsu studio in 1965 after graduating from high school.[1] In 1969 she appeared in Nihon Zankyoden, one of a series of films directed by Masahiro Makino, who recognized her acting ability and gave her the stage name of Meiko Kaji.[2] From 1970 to 1971 she appeared in the Noraneko Rokku (Stray cat/Alleycat Rock) series of films about delinquent young people.

In 1971, Nikkatsu moved into the pink film business, and to avoid this, Kaji moved to Toei Company.[1] There she made the Female Convict 701: Scorpion series of films. In 1973 she took on the role of Yuki in the revenge-themed film Lady Snowblood, followed by a sequel, Lady Snowblood 2: Love Song of Vengeance. She went on to appear in several of Kinji Fukasaku's films, such as Yakuza Graveyard (1976). In 1978, she starred in Sonezaki Shinjū, for which she earned nominations for Best Actress at five different awards shows, winning four of them.[4]

Kaji has worked in television since the 1980s. In 1989 she portrayed Omasa, an informant, in the television jidaigeki Onihei Hankachō (the Shochiku–Fuji Television version starring kabuki actor Nakamura Kichiemon II).

She is also a singer. She sang the theme song to Lady Snowblood, "Shura no Hana", and the theme song of the Female Convict Scorpion series, "Urami Bushi". When these songs were both used in Kill Bill,[1] it led to a revival of interest in her music. This encouraged her to resume her musical career.[5] In 2009 she released a single, Onna wa yametai. In 2011 Kaji put out her first new album in 31 years, Aitsu no suki-so-na burūsu [6] with songs written by Ryudo Uzaki and Yoko Aki.

She also received acting offers from Hollywood, but refused them all, saying she could not give a good performance in a language other than Japanese.[7]