Review of the Blue Underground 3-Disc Limited Edition region-free re-release of Maniac 1980 in the new 4K Restoration, released in lenticular packaging, of December 2018. 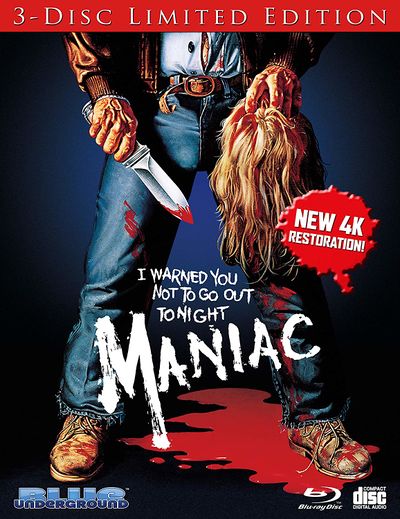 The movie tells the story of Frank Zito (Joe Spinell), a psychopathic loner, who lives in an apartment filled with fashion dolls and who ventures outside to kill random people. He gruesomely murders a couple at the beach, a prostitute, a dancer, and so on. It seems like something in him snaps, especially when childhood memories creep up in him and his demonic side takes over. When he meets a young photographer Anna (Caroline Munro) it seems like he can get a grip on things and have a normal social relationship with her. They go out on dates and meet friends, but he's still the Maniac....

At just under 90 minutes, Maniac 1980 clocks a concise thrill, never meandering, building up nicely and not wasting time. Joe Spinnell nails it as the titular Maniac, whose motivation we are left to decipher. There are a few hints, like his mommy complex, a childhood trauma, and his military past (jacket, bayonet, etc.), the latter I thought would indicate a PTSD type movie but for a 1980 movie, Vietnam was a long way gone.

What's interesting about Maniac, is that from very early on we know who the Maniac is, but we hardly know who the victims are. Wheras, in the Giallo of Italian cinema fashion, it is usually the other way around. In fact, Maniac would have been quite an amazing Giallo were it not for the revealing of the slasher. A lot of the stylistic devices of the Giallo are there, and let's be honest: it's brutal and vicious, but despite all the blood and FX, the shock effect is dated and it is a rather tame affair in the end. Just a wee bit of nudity thrown in for good measure - yet some of Lustig's Italian compatriots would have made this a much raunchier affair to be sure. As you will find out from the booklet, Dario Argento was in fact attached to the film at some early stage.

Until recently the movie was still banned in Germany, in the notorious company of a lot of movies made in this era that seemed to make it not clear enough that the violence is bad, and of course in this movie the violence is stimulating the perpetrator, so even worse for the censors. Now, Maniac probably sets itself apart from others in that it serves up a particularly blunt type of violence that initially seems random and driven by pure lust, it's only later when we piece it together that Frank's pathological defect shows and the violence turns out to be uncontrolled outbursts of almost a split personality, something he is fighting, something he is talking to himself about, but that takes over and absolutely dominates him.

Spinell does a fantastic job playing Frank, and no wonder the movie has evolved into a certain cult hit with a devoted audience. It seats nicely in a canon of films like Halloween or Silent Night, Deadly Night and so on.

Blue Underground has released this one a few times before, each release better than the earlier one. No wonder the company puts so much devotion into it, it's the director's own company. This release adds to the previous 30th anniversary edition (see Pete's review here) in a few details, the biggest jump being the new 4K scan of rediscovered 16mm originals that make up this presentation.

The video quality then is quite nice, but the material clearly shows. 16mm doesn't offer the detail and sharpness of larger formats and scanning at 4K cannot undo that fact. The colors come out nicely in this transfer and the image is clear of dirt and damage, but it is often a bit blurry and overly grainy. That works perfectly with this movie, it's just important to say so as not to raise undue expectations. Having said that, it's a gigantic leap from the 2010 transfer Blue Underground could offer on the last release. Colors, detail and contrast levels of this transfer do the movie justice (finally) and will please fans of the film.

They outdid themselves with language options on this one. They carried over from previous releases the original track remastered in a (rather unnecessary) 7.1. DTS-HD MA track, its 2.0 alternative option (would have sufficed, the 7.1 track, tested on a 5.1 system, offers hardly anything resembling surround sound). Along with that there are Dolby Digital 2.0 tracks of the Spanish, French, Italian and German dubs!

But that's not all, there's subtitle options in English (SDH), French, Spanish, Portuguese, Japanese, Mandarin, Korean, Thai, Danish, Finnish, Dutch, Swedish, Russian. All in all, this is a commendable effort, and the disc being free of region coding means this is a great import/export version for the global market of fans.

With the extras on this disc I'm gonna refer you to Pete's review and only go into the stuff that's new. This release spreads the extras across the two BluRays, while the previous release had extras on a DVD.

What's new are two extras. One is 20 minutes of outtakes with director commentary and introductions, the other is a new interview with Bill Lustig (Returning to the scene of the crime) that goes for 8 minutes and is shot on some of the locations.

The third disc is the soundtrack CD with the score by Jay Chattaway. The first pressing comes in lenticular packaging, and includes a booklet with new 2018 liner notes by Michael Gingold about the production of the film and the possible follow-up films that did and didn't come to fruition. There's also coupon codes for Eibonpress included in the package.

Conclusion: Discovering or rediscovering Maniac in this way is a revelation, not because it's a huge masterpiece (it's just a small masterpiece maybe), but because this gets you so close to discovering it the way it was meant to be seen. The 4K transfer, while not being able to hide the film's age and production quality, looks super authentic and is a huge improvement over the previous release. The entire package is chock full of extras, doing the film and its heritage proper justice. For fans this should be enough of a reason to upgrade, but since the film is not for everyone that depends on where you stand regarding the film's own merits. I thoroughly enjoyed the film.