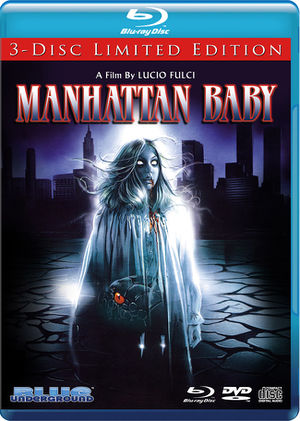 Professor George Hacker (Christopher Connelly) is an archaeologist trying to uncover secrets of an ancient burial site in Egypt, when he gets blinded by a mysterious gemstone he finds in a tomb. At the same time, his wife Emily (Laura Lenzi) and their daughter are sightseeing among old ruins and marketplaces. The kid is already acting a bit strange, but as the woman takes pictures elsewhere, she accepts and amulet from a strange woman, and thus receives and ancient curse. Back in Manhattan, the family struggles. The father’s eyesight is not quickly returning, and the daughter is having hallucinations. Actual desert sand ends up covering apartment floors, a scorpion must have found its way into a desk drawer, a cobra kills the Professor’s confidante in his weird quest to solve the mystery, and the daughter’s younger brother seems to be travelling in time….

Manhattan Baby is from 1982, and not mega exploitation-y to be frank. Raiders of the Lost Ark came out a year earlier, The Jewel of the Nile in 1985. And those weren't the only adventures in the 80s that seemed to have been inspired by some secret mysticism of the middle east and other exotic locations some filmmakers were drawn to. Maybe I'm interpreting too much into this however. Lucio Fulci's multi-facetted filmography bears no surprise to this foray into some mythic horror adventure. By the way, the German title translates to "Amulet of Evil", which is a way more fitting title. Manhattan Baby might have been picked as a title to remind audiences a bit of Rosemary's Baby, at least I am assuming.

Chris Connelly, who died in 1988 and appeared in Django's Revenge, 1990: Bronx Warriors and a whole lot of television, does a great job playing the befuddled professor, but he fails to really carry the film, neither do any of the other actors. The movie is thus lacking a charming personality the audience can identify with. That doesn’t mean the movie is not well acted, in fact it’s quite okay, but it’s really not an actor’s movie. Fulci, who died in 96, also appears in the movie himself as Dr. Forrester. Walking a fine line between horror, mystery and psycho-thriller, I can’t help but think this Fabrizio De Angelis produced flick never really had that much enthusiasm behind it. The beginning seems ambitious, the sets interesting, the effects at least original, but it then falls a bit flat, and aside from some minor shock moments, it’s actually rather boring.

The music by famed Fabio Frizzi is eerie at best, but cheesy 80s synth music for the most part, and doesn’t help the horror much, either. Close-ups of scorpions and some slithering cobras still are a thrill to see on the screen, but combined with that 80s music, they don't pack so much of a punch, it has a disarming effect from today’s perspective. Some of the ideas are amazing though, for example using sand as a device and an amulet as the conduit for evil, without showing any monsters, ghosts or anything of that sort. The visuals are really quite good and the originality behind some shots is laudable.

All in all, Manhattan Baby is an interesting mystery movie with some good moments and decent craftsmanship. The story however is a bit lame, and the movie doesn’t really excite much anymore, it didn’t age well. There are a lot of better Fulci movies out there, but if you’re exploring his filmography, don’t skip this one. For all my negative talk, it’s still a fairly interesting adventure flick to see, with effects that stand out.

The Blue Underground release offers the movie on BluRay and DVD as well as a compact disc with the eerie soundtrack. The new transfer looks great - sometimes really great - and only a few parts look a tad faded. There's some visible print damage, but overall this new 4K scan is quite astounding. Contrast is excellent, so is color for the most part, and it all looks very sharp and vibrant. Excellent job there.

The audio is a mixed bag. There's a 2.0 mono track and a 5.1 upmix (I tested the latter, but not on a 5.1 system, both are DTS-HD encoded). Aside from the fact that the dub is mediocre at best, it just sometimes sounds a bit flat. But the quality is fine and the dialogue is easy to understand. Especially loud moments however lack dynamic range and thus sound dull. It's not helped by the ridiculous 80s music that from today's perspective fits the subject matter like a size 10 shoe on a toddler. There are subtitles in English, French and Spanish.

There is a ton of extras on this disc. Starting with "Fulci and I", which is a 56min interview with Fabio Frizzi, the composer. Then there is "For the Birds", a 9min interview with Cosimo Cinieri (who plays the character of Adrian Mercato). A new 11min interview with makeup effects artist Maurizio Trani, an 8min interview with Dardano Sacchetti, a cowriter, rounds up the interviews with involved folks. Then there is a 13min interview with Fulci expert Stephen Thrower, which is a nice addition to the booklet. All these interviews make for about 90min of intense insight into the movie and the work of Fulci, a set of extras that is quite amazing and provides for more than just fun trivia, it's a rather in-depth look that is worth setting aside time for. The 9min live studio performance by Fabio Frizzi of the main title theme is a fun add-on. Lastly, the theatrical trailer and some artwork galleries. All in all a nice set of extras that gives you a decent picture of the movie and its context.

To sweeten things a bit, there's a booklet by Troy Howarth (which does an awesome job at contextualizing the film, and interestingly his views mirror my impression of the film in a lost of ways) and a Bonus CD with the original motion picture soundtrack to the movie by Fabio Frizzi.