Mandingo (1975, USA) is a Blaxploitation film directed by Richard Fleischer. It is followed by Drum. 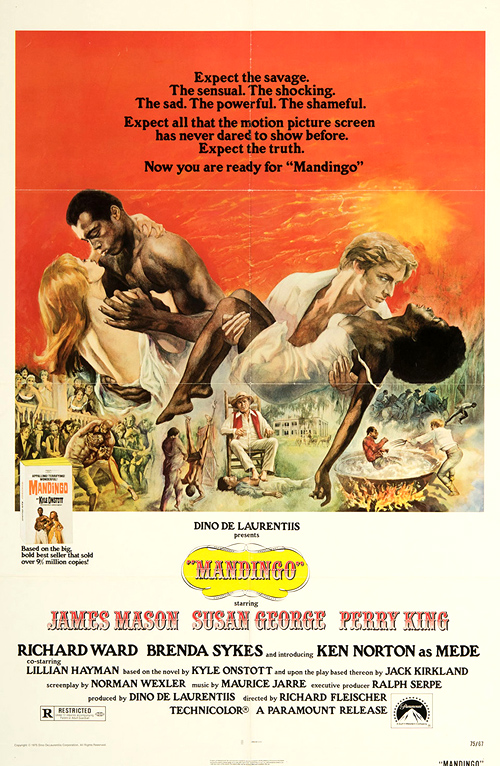 Mandingo is based on the novel Mandingo by Kyle Onstott, and on the play Mandingo by Jack Kirkland (which is derived from the novel). Upon its release in 1975, critical response was mixed although box office was strong. Roger Ebert despised the film, calling it "racist trash", and gave it a "zero star" rating. Richard Schickel of TIME found the film boring and cliché-ridden. Movie critic Robin Wood was enthusiastic about the film, calling it “the greatest film about race ever made in Hollywood.” In Leonard Maltin's annual publication Leonard Maltin's Movie Guide the film is ranked as a "BOMB" and dismissed with the word "Stinko!". Director Quentin Tarantino has cited Mandingo and Showgirls as the only two instances "in the last twenty years [that] a major studio made a full-on, gigantic, big-budget exploitation movie". In Django Unchained, Tarantino took the non-historical terminology of "Mandingo fighting" from the use of "a Mandingo" being a fine slave for breeding in the film. (Wikipedia)