NOTE: In the spirit of observing Grindhouse entertainment as it existed in the 1970s, this review is based on the original theatrical release of Phillippe Mora’s Mad Dog Morgan (1976).

We open to the story of the real-life Australian outlaw (aka bushranger), Jack Fuller (aka Daniel Morgan; 1830 - 9 April 1865). Born in New South Wales, Fuller was raised by an adoptive father. He began work as a stockman and eventually tried his luck in the goldfields of Castleman, Victoria. By 1854, he had established himself as thief and a highway robber and was sentenced to 12 years hard labor and released after serving six. Although he used many aliases in his criminal years, “Mad Dog” was a convention of the film.

The original version of this movie badly needed more editing. The story plays out in an awkward series of jumps. Many of Hopper’s lines are delivered as if they were actually filmed as screen tests. However, Phillippe Mora is not totally to blame for the quality of the film. Filmed in the mid-70s, this film shows Hopper in what many consider to be his “lost years.” It's no secret that Hopper was living on drugs and booze during the 1970s. In an interview concerning Mad Dog Morgan, he admits that once he started consuming 151° rum he was off and running. He had several run-ins with the law during the shooting of the film and was ultimately deported before the film completed shooting (although Mora claims that all of Hopper's parts were done). All of this is recounted in the Director's Cut, released in 2009, in a featurette titled "That's Our Mad Dog" which is an interview between Mora and Hopper. 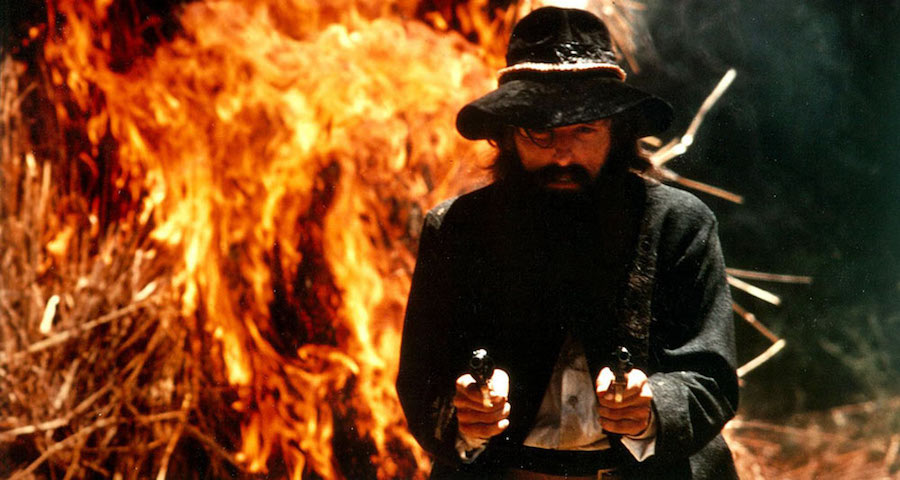 After his success with Easy Rider (1969), Hopper followed with The Last Movie (1971), which ultimately failed both financially and critically. Throughout the remainder of the decade, Hopper appeared in a random number of European-based exploitation films. In Mad Dog Morgan, we see Hopper near the end of this period. He is visibly out-of-his-skull throughout most of this performance. Seeing this film from a modern perspective, Hopper's antics make this film more interesting than it may have been. Knowing that a true "Mad Dog" was cast as "Mad Dog Morgan" makes this movie a bit surreal and gives a surprising peek into one of Hollywood's most rebellious, talented figures to grace the screen. Hopper is legendary, and the fact that he's survived himself throughout the 1970s is miraculous. Viewers who see this film (along with newly available footage and documentaries) will ultimately sympathize with Mora on the grounds that Hopper was completely out of control throughout the making of this film. Every line, every break in continuity can be justified and, in the end, you'll come away with a new respect for Hopper, Mora, and Mad Dog Morgan.

Despite the quality of Mad Dog Morgan, it will be appreciated by Hopper fans. This film stands as a record of Hopper’s nearly 50 years in the business. He was at the tail end of his downward spiral and, by 1979; Hopper would appear in Apocalypse Now, which would be the beginning of his 1980s renaissance.

Perhaps the best way to view this film is by learning some of the back story before hand. Viewers, who learn about the context of the making of this film, should have an improved appreciation for its place in the exploitation (Ozploitation) lexicon.