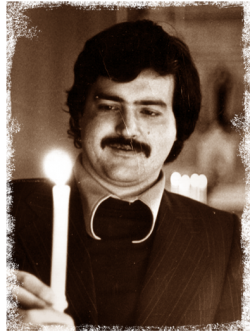 Luigi Cozzi (born September 7, 1947, Busto Arsizio, Italy) is an Italian movie director and screenwriter who directed mainly science fiction and horror films in the mid-1970s and throughout the 1980s.

Cozzi has been interested in film making since his teen years, producing a low budget science fiction film at age 21 called The Tunnel Under the World[1], which brought him to the attention of producer Dario Argento. Cozzi worked as an assistant director and screenwriter on a number of Argento's most famous movies, even directing a made-for-TV movie called The Neighbor for the "Doorway To Darkness" television series produced by Argento in 1973.

Cozzi's first professional film was a 1975 giallo he made called The Killer Must Kill Again after which he was hired to direct a number of bigger budget science fiction and fantasy films, such as Contamination, Star Crash, Hercules and Hercules 2. Cozzi worked with a lot of well-known genre actors such as Caroline Munro, Sybil Danning, Lou Ferrigno, Joe Spinnell, Klaus Kinski, and Brett Halsey.

In 1986, he wrote and planned to direct Sinbad of the Seven Seas, but the producer replaced him at the last minute with director Enzo G. Castellari. Castellari changed Cozzi's script drastically and several million dollars later, wound up submitting three hours of non-releasable footage to the producer, who shelved the project. In 1989, Cozzi was hired back to come in and fix up the picture, the producer spending an additional half million dollars finishing it.

Cozzi wrote a script he called De Profundis, which was supposed to be an unauthorized finale to Dario Argento's unfinished "Three Mothers" Trilogy (begun in his films Suspiria and Inferno). Cozzi shot the film as "De Profundis" (which means "From the Deep") starring Caroline Munro, but the American distributors (who at that time were planning a series of Edgar Allan Poe films) changed the title of Cozzi's film to "The Black Cat" at the last minute, although the film had no connection to Poe. Their Poe film series, however, never materialized. Cozzi's retitled film received very poor (if any) distribution, and does not seem to have ever been released on video. Cozzi later discovered that director Lucio Fulci had expressed an interest in directing his screenplay, without realizing that Cozzi had already directed the film himself. (It's probably just as well, since Fulci had already directed a film called The Black Cat back in 1981.

Cozzi also worked on the special effects in Dario Argento's Phenomena, and was an assistant director on The Stendahl Syndrome, Two Evil Eyes and Nosferatu in Venice (a sequel to Nosferatu the Vampyre which gave him the chance to work with Klaus Kinski). When Mario Caiano (the director on Nosferatu in Venice) quit the picture unexpectedly, Kinski attempted to finish directing it himself, and the producer brought Cozzi in to help Kinski co-direct it. The film did very poorly, mainly because Kinski refused to wear the Nosferatu make-up he wore in the earlier film. Cozzi also co-wrote the screenplays for Four Flies on Grey Velvet and Lamberto Bava's Jaws knock-off Monster Shark. Some of his work was done under his Americanized stage name Lewis Coates.

Cozzi's final horror film Paganini Horror was a major disappointment to him, since he was unable to work effectively within the tiny budget he was given. Argento's wife Daria Nicolodi co-wrote the script with Cozzi and starred in it. In 1987-88, Cozzi directed 9 episodes of the Italian television series Turno Di Notte (some of which starred Asia Argento and Daria Nicolodi). He later made two documentaries on the films of Dario Argento, and for years operated and managed Dario Argento's retail movie memorabilia store in Italy.